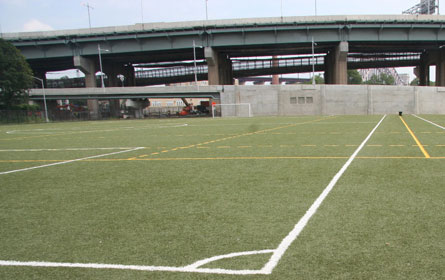 When State Supreme Court Judge Shirley Kornreich annulled a concession agreement between the Randall's Island Sports Foundation, the Department of Parks and Recreation and a consortium of 20 private schools last winter, Geoffrey Croft, one of the plaintiffs, was pleased.

"We felt good about it," Croft, the president of the watchdog group NYC Parks Advocates, said. He says he thought the ruling would "make sure that the community is at least informed about the project. We also thought that the construction would stop."

However, construction went on, and in June the city signed off on a new, and some say better, deal. The new deal has reduced the amount of fields reserved for private school use -- a major criticism of the city's first plan -- from two-thirds to half.

But Croft and other critics of the plan, scheduled to go into effect this September, continue to contend that community input from East Harlem and the South Bronx, low-income areas that surround the East River island, has been sorely lacking. Opponents of the concession plan say that none of the members of the sports foundation's board, which runs the island in partnership with the city, live in East Harlem or the South Bronx, and that some members of the board have or had children enrolled in some of the private schools that were part of the concession.

While the new concession agreement has won over some critics, other community activists continue to voice opposition.

"Children in [East Harlem] and the South Bronx... have [high] asthma rates, there's no quality food supermarkets, so we have the fast food, so we have diabetes and obesity," said Marina Ortiz, a critic of the concession and president and founder of East Harlem Preservation. "People need access to parkland to combat these health issues, and we also have a right. And we're being denied that right, and it's unfair."

Opponents charge that the Bloomberg administration and the sports foundation are favoring private schools over the surrounding communities, and that the concession amounts to privatizing the island. Critics also say the city has stymied community involvement in the planning process by bypassing the Uniform Land Use Review Procedure.

About 80 percent of the construction on the island is completed, and the remainder should be done by 2011, according to estimates by the Department of Parks and Recreation. While the parks department has slated $61.5 million for the field construction, the total cost of the project skyrockets to $190 million, according to the Independent Budget Office. The Economic Development Corporation has committed $115 million for the project's infrastructure through 2010.

The latest accord has not placated critics. "It's the exact same deal. They've lowered the percentage to 50, [but] they're just trying to do an end-run," around the court order, Croft said.

"Ramps are being built from various sections of the [RFK Bridge]...to accommodate this commuter park they've designed," she said. "It's not about local access. It's great, everyone should be able to come to Randall's Island, but that means everyone."

At stake is who, when and how much students and community residents get to use the fields on Randall's Island. The island is a vast 273-acre piece of land that sits on the East River and is surrounded by the communities of East Harlem, the South Bronx, and Astoria, Queens. It's sprinkled with facilities from tennis and golf centers, which you have to pay to use, to a homeless shelter, ball fields and more.

The dispute is a classic example of the debate over the proper use of private groups and money that finance public parks. Public-private partnerships, like the one between the sports foundation and the parks department, are seen as one solution to pump money into an underfunded budget for city parks. In the midst of a fiscal crisis, the Bloomberg administration recently slashed $13 million from parks maintenance, making the cuts to parks since 2007 a total of $24 million. However, at the same time, private money has helped to plug holes in the dearth of public money for parks.

"Public-private partnerships that invest in our communities are always appreciated, but especially now, during a fiscal crisis," Phillip Abramson, a spokesman for the parks department, wrote in an e-mail.

The reliance on private money, though, fuels charges of "pay to play" schemes and undue private influence on public and open space.

On the other hand, the city and the sports foundation say the new deal will widen access and create thousands of hours of additional playing time.

Recent testimony given by Richard Davis, the chair of the sports foundation, in front of the Office of Contract Services' Franchise and Concession Review Committee, applauded the deal.

The agreement will give "scores of new first class fields used by all our kids, a greater ability to meet the extensive needs for weekend fields and, for the first time, very meaningful after school use by public school kids," Davis said.

The latest deal has won over some past dissenters, like Manhattan Borough President Scott Stringer, who originally voted against the deal with the private schools.

In an opinion piece for the Spanish-language newspaper El Diario, Stringer wrote, "This new agreement is designed to ensure that the people of the South Bronx and East Harlem have real and meaningful access to all of the Island’s resources."

Stringer also applauded the $100,000 that was secured for 10 sports teams from public schools, and the fact that the teams will be transported with shuttle buses from 125th Street to the island. A spokeswoman for Stringer says that Stringer’s office gave $75,000 for transportation.

The new agreement will create opportunities for healthy activity, "especially for residents of East Harlem and the South Bronx," said Aimee Boden, executive director of the Randall's Island Sports Foundation. The foundation is working "to bring community people out to the park, and to advise them every step of the way," Boden said.

When asked about criticism over the amount of community engagement within the plan for Randall's Island, Boden said the sports foundation has been working with local community boards and residents, and pointed to the existence of a task force on Randall's Island that includes local representatives.

Another Day in Court

A new lawsuit, with many of the same plaintiffs, including Croft and Ortiz, was filed in late May, using largely the same arguments.

The crux of the legal argument against the concession agreement is that the city needs to go through a review process known as the Uniform Land Use Review Procedure because the deal amounted to a "major concession." One of the criteria for determining whether a concession is major is if the concession involves more than 30,000 square feet of open use. The plaintiffs say the parks plan involves more than that. The procedure requires the plan to be submitted first to the community board, and then the borough president, the City Planning Commission and the City Council.

When Kornreich ruled on the original agreement, she wrote, "the court disagrees with this strained interpretation of the concession, an interpretation designed to evade ULURP review."

The city argues that the new concession is not a "major concession" because the new sports fields continue an existing use that existed for the past two years, which is an exception to having to go through the land use procedure. The plan has only gone through the Franchise and Concession Review Committee, where a majority of that committee's members are appointed by the Bloomberg administration, which supports the deal. Mayor Michael Bloomberg is an "honorary trustee" to the board of the Randall's Island Sports Foundation.

The committee has approved the concession agreements, both the annulled one and the newest incarnation.

"Obviously this is another effort at evading [the Uniform Land Use Review Procedure]," said Gavin Kearney, environmental justice director for New York Lawyers for the Public Interest. "Basically, it's the same thing with cosmetic changes, and they're basically trying to avoid the letter and the spirit of the court's ruling," he said.

The parks department labeled the ongoing 209-acre construction at Randall's Island a "Type I" action--meaning that actions on the island would have a significant impact on the environment and may require a full environmental review process.

But the department filed a "negative declaration," and argued that construction will not have a big impact on the environmental quality of the island.

Kearney disagrees, and accused the parks department of a "cursory" look at the impact the construction will have.

In an e-mail, Abramson of the parks department wrote, "The petitioners' claims are without merit... Based on [our] study, we reasonably concluded that the Randall's Island project has no potential to create adverse impacts."

Kearney remains confident that the plaintiffs will get a favorable ruling.

"I think we're pretty confident that the court will see this for what it is, which is basically another effort to get around the city's legal requirements."