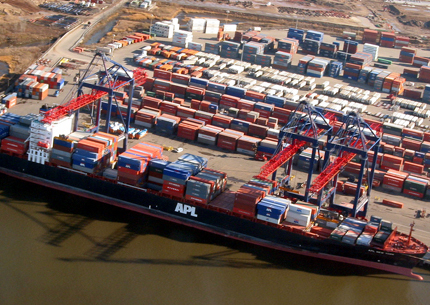 Large ships bring us the goods we want, when we want them. The coffee at the deli, the car on the lot and the sneakers in the store window — it is likely that they all came to New York on huge ships. Unfortunately though, these vessels also bring us something we do not want: pollution.

Cargo growth is expanding unchecked with no end in sight -- a function of our global economy. In 2006, port facilities moved more than 30 million tons of ocean-borne cargo and handled 5 million 20-foot equivalent units, or TEUs, a measure equal to the size of a standard shipping container. This represented a sharp increase from the 2.2 million TEUs and 21.6 million tons of cargo in 2002. In New York, ships also carry people. If you live on Staten Island, your primary connection to Manhattan may be the orange-coated Staten Island Ferry, which carries 65,000 passengers every workday. And the region boasts new ferry and water taxi services each year.

Unfortunately, these large ships are the last bastion of dirty diesels. They emit huge quantities of a pollutant that the Environmental Protection Agency regulates as "PM10." This particulate matter is less than 10 microns in diameter, about 1/7 the width of a human hair, and is what most people would call "soot." When emitted by diesel engines, this soot contains dozens of known and probable carcinogens, and has been linked with hundreds of thousands of asthma attacks, nearly 24,000 premature deaths and more than $160 billion in health costs annually.

These ships also emit large amounts of a family of gases known as nitrogen oxides (or "NOx"). NOx emissions are a principal culprit in the region's chronic smog, the summertime pollution that can cause permanent lung damage and make city life harder for asthmatics, children, the elderly and others with heart or lung ailments. Unlike trucks, buses, construction equipment and other diesel engines (which are getting cleaner every year), the diesel engines that power our ships were, until very recently, virtually unregulated.

That is changing. On March 14, the federal Environmental Protection Agency announced a strong, new program that will dramatically clean up these engines in years to come. The plan, contained in a rule announced by agency Administrator Stephen L. Johnson, will cut soot pollution from new ship (and train) engines by 90 percent, starting in 2015. It will also cut NOx emissions by 80 percent, beginning in either 2014 or 2015, depending on the size and type of engine. And from now on, today's dirty engines will be required to be rebuilt to cleaner levels when they undergo their regularly scheduled overhauls. Since they get overhauled every four to five years, we will see significant emissions reductions fairly quickly.

Thousands of hospital visits and almost 1,400 premature deaths will be avoided nationally every year, as the nation's 40,000 ships and 21,000 diesel locomotives clean up in years to come. This also is an extremely cost-effective way to cut pollution. Judging from EPA's data, every dollar invested in cleaner diesel engines should result in up to $15 in health savings. Of course, ships last for decades. So, the region's port operators and freight haulers need to find ways to accelerate the clean up of today's dirty engines. We shouldn't have to wait for decades to reap the full benefits of EPA's new regulation.

Here in the city, cleaner ships are already on the way, In February, Mayor Michael Bloomberg signed a new law passed by City Council that will reduce the pollution plume from the Staten Island Ferry right now. This creates a model that may one day clean up all of the ferries and water taxis operating in New York Harbor. It's a significant step toward reducing ship pollution in New York. This new law requires the Staten Island Ferry to run on low-sulfur emission fuel and use the best-available pollution-cutting technology. Cleaner diesel ferries are already possible. A 2006 study by the New York State Energy Research and Development Authority of private ferries in New York Harbor showed that using the low-sulfur fuel and a basic catalyst reduced soot by 32 to 60 percent. Ferries that were rebuilt to the levels in the new Environmental Protection Agency rule reduced soot by 84 percent and NOx by almost a quarter.

Indeed, some ferries have already taken important steps to reduce their emissions. The John F. Kennedy, the oldest boat in the fleet, was the first to use the new fuel, which combines truck-grade ultra-low-sulfur diesel fuel with 5 percent biodiesel. In 2006, a custom-built selective catalyst reduction system was added to the Alice Austen ferry. It reduces the ferry's emission of nitrogen oxide by 16.5 tons a year. The bottom line: The pollution caused by the ships steaming through New York Harbor has not been a front-page story. But ships add significantly to the pollution affecting all New Yorkers. Thanks to two important steps taken at the city and federal level, New Yorkers should reap significant benefits for years to come, while still enjoying goods from far away and the sunsets from the decks of the Staten Island Ferry.

Rich Kassel is a senior attorney at the Natural Resources Defense Council, where he focuses on urban air pollution and transportation issues. He also chairs the Tri-State Transportation Campaign, a regional transportation advocacy organization and blogs on a variety of environmental issues on the NRDC Switchboard.Â