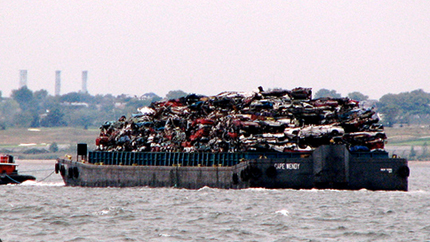 Amid the pages and pages of ideas and proposals to move New York toward sustainability in PlaNYC, there is barely a mention of solid waste. Even though solid waste has a huge environmental impact, PlaNYC ignores both the problem and the new movement toward zero waste.

Meanwhile, the extension of the few, current, pilot-sized initiatives in the city's most recent long-term solid waste management plan will do little to prevent. It only tentatively addresses a small portion of the 40 percent of total waste of the waste stream that is the organics fraction. Just a tiny fraction of the sanitation department's more than $1 billion budget goes to waste prevention.

Other forward-thinking countries, states and communities have already set a goal of zero waste and are aggressively implementing programs, legislation and incentives to achieve it. Widely misunderstood, zero waste simply means that our discards are recycled, composted, reused or not created in the first place. None of these materials should be disposed of in incinerators or landfills or exported, as New York currently does with almost 85 percent of its waste.

The Impact of Garbage

PlaNYC showed the volume of greenhouse gases that cause global warming emitted from within the city's borders. Providing that information is a great accomplishment. But the report does not go far enough. It only counts the gases actually emitted in the city, ignoring all the greenhouse gases that result from producing products and packaging that New Yorkers use and from bringing those goods to us.

New York City's carbon footprint (the total amount of greenhouse gases produced to support human activities here) should extend to the activities and communities that supply and manufacture the things that we demand. Various estimates show that "upstream" impacts account for 70 percent of emissions caused by products and materials that eventually become waste. Logging, mining and manufacturing towns have a huge carbon footprint totally disproportionate to their populations. Much of it derives from goods they provide to us. Not taking responsibility for these carbon emissions is wrong also because we then have no impetus to innovate and pursue measures to reduce them (i.e., zero waste initiatives).

The report also ignores the carbon emissions and other impacts of getting rid of waste. It does not include the emission deriving from the disposal of New York City's waste at incinerators in Newark and elsewhere, in Pennsylvania and Virginia landfills or transporting the materials (most of which is recyclable, compostable and/or would not have to be created in the first place) to these facilities.

The city's carbon footprint report indicates that buildings create 79 percent of the carbon emissions, while solid waste was responsible for only 3 percent of the city's greenhouse gas emissions in 1995 when the Fresh Kills landfill was open and zero after that. For all the reasons mentioned, this is an inaccurate estimate.

The effects of landfills, the most common waste management practice used by New York City, are particularly damaging, according to the federal Environmental Protection Agency. "It results in the release of methane from the anaerobic decomposition of organic materials. Methane is 21 times more potent a GHG than carbon dioxide," the agency has found.

Incineration creates toxic ash that must be disposed of. Despite significant technological advances in reducing emissions of toxic gases, greenhouse gases are emitted from waste-to-energy plants, and the amount of energy they generate is less than the amount required to log, mine, manufacture and move new materials to replace them.

If the city were to acknowledge the environmental impacts of its residents' demand for goods and materials, it would have to take a much bolder approach to conserving materials than its does in its 2030 goals or solid waste management plan. Conversely, if we disassociate ourselves from the contributions that our demands for and disposal of products and packaging make to global warming, we will have no reason to reduce our consumption and increase reuse, recycling and composting.

Cutting Back on Waste

No method can reduce the environmental impacts of waste as much as waste prevention. New York State's Solid Waste Management Act of 1988 states that waste prevention is the most environmentally desirable option for dealing with solid waste. Recycling, reuse and composting are near the top of preferred methodologies.

Recognizing a need for a bolder vision, in 2004 a coalition of solid waste experts, including myself, wrote "Reaching for Zero: The Citizens' Plan for Zero Waste in New York City," a 200-page, 20-year plan. Each year is packed with innovative measures to maximize waste prevention, reuse, recycling and composting, and with associated economic development, education, enforcement, transportation, financing, legislation and research. It proposes specific short, mid and long-term tonnage goals, overall as well as for prevention, reuse, recycling and composting. The report recommends the creation of an extensive new reuse and composting collection and processing infrastructure and innovative pilot and research programs.

Examples of short-term measures to bolster reuse include 40 neighborhood swap shops, four reuse complexes and four material recovery facilities with a fleet of trucks. Mid-term examples include construction of anaerobic digestion facilities to convert 45 percent of the city's food, yard and soiled papers to biogas and an organic fertilizer product, which can be used elsewhere.

The plan calls for legislation to ban recyclables and compostables from export to landfills and incinerators and to require that manufacturers take back more products for repair and reuse. A "pay as you throw" billing system, used in 7,000 U.S. communities, would reward residents for recycling, composting and throwing out less waste and penalize wasters. As export is reduced, jobs in the local reuse, recycling and composting sectors would rise. Clearly, zero waste would have been a perfect framework for PlaNYC and the city's solid waste plan.

In 2005, I organized an environmental coalition to work with the Assembly to strengthen and modernize the state's Solid Waste Management Act so that local plans would have to adhere to practices aimed at achieving zero waste and that municipalities would actually implement all measures in those plans. (To read the coalition's legislative redraft and recommendations, click here.)

Here are specific recommendations for how the city can get closer to zero waste.

* Add a commitment to PlaNYC to ensure movement away from export, landfilling and incineration toward achieving zero waste disposal by 2030.

* Correct the city's carbon footprint inventory document to account for and take ownership of the greenhouse gases produced elsewhere as a result of demand and acquisition of materials by the city and its residents.

* Correct the city's solid waste management plan so that it adopts the measures recommended in "Reaching for Zero."

* Supply the funding necessary to implement the zero waste measures.

* Enact the modifications to the NYS Solid Waste Management Act of 1988 to modernize the policy goals to include zero waste and require that localities' plans include and that they implement a sufficient number and diversity of these measures.

Maggie Clarke of Maggie Clarke Environmental has a doctorate in earth and environmental sciences and is a long-time New York City-based solid waste scientist, researcher, educator, and activist.Â