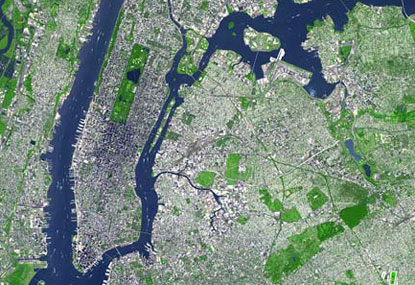 (c) 2007, New Yorkers for Parks
The Open Space Index will create a set of targets to help to ensure that the park needs
of New Yorkers are met.

As New York redevelops and rezones areas throughout the city, the government envisions new parks and other open spaces as key parts of many of these projects. However, unlike Chicago or London, New York City has no statutory comprehensive plan for the city - much less for its parks and open spaces.

Consequently, the fate of parks and open space is decided in an ad-hoc manner, with little input from affected communities and without sufficient consideration for local and regional needs. With one million additional New Yorkers expected by 2030, the city must look seriously at how it manages, uses and plans for parks and open spaces.

PlaNYC is all good news for parks and open space. Unlike the proposals in other parts of the plan, meeting the goals on parks is entirely within the mayor's power, requiring no action by the City Council or state legislature. As a result of the plan, the budget for the Department of Parks and Recreation has increased more than it has in decades. This has led to major capital investments in parks in each borough as well as the renovation of previously locked school yards so they can serve as neighborhood playgrounds. Simultaneously, the city and the private New York Restoration Project have taken steps to plant a million trees. These initiatives are all much needed and generally have been well received by communities.

PlaNYC sets a goal of having every New Yorker within a 10-minute walk to a park. Fortunately, most New Yorkers throughout the five boroughs already live that close to a park.

What is needed now is to pick up where the mayor's plan leaves off. After the walk to the park, what do I find? Is my park clean? Does it have the features that serve my community? How far do I have to walk to have my open space needs fully satisfied?

For now, New York has no over-arching parks policy or master plan to address such issues. Other cities do. London, for one, has a plan that lays out specific strategies for its open space goals. Like New York, London dictates how close people should be to open space, but it goes beyond PlaNYC to set distances for different types of open spaces (recreational areas, destination parks, playgrounds). It presents detailed benchmarks and guidelines for achieving these goals.

The London plan was vetted through a public process and is codified in law. This ensures the longevity of the plan. PlaNYC lays out Mayor Michael Bloomberg's agenda for sustainability, but has not gone through a legislative process, leading to concern about what will happen after he leaves office in 2010.

A Tool for New York City

To begin to formulate standards for open space planning, New Yorkers for Parks aims to create an Open Space Index for the New York. Much like profiles the health department uses to assess the health of a community district, the Open Space Index will be a way to evaluate the condition of open space in a neighborhood. Through a combination of analysis of current New York City open space and of measures in other cities, New Yorkers for Parks will develop an index of targets for parks and open space access. For example, it could determine that every New York City community district should have 2.5 acres of parks and open space per 1,000 residents or 15 percent green roof coverage

The index (which is presently being reviewed by an advisory group) will evaluate neighborhood open space elements such as tree canopy cover, green roof cover, permeable land area, the percentage of parks in acceptable condition, acres of open space per 1,000 people (active recreation space people and passive space) and walking distance to a park by type of facility (pocket park, field, destination park etc.). Given the unique characteristics of New York City's geography and land use, the index must be flexible enough to be relevant across diverse neighborhoods in all five boroughs.

A Test on the Lower East Side

Upon completion of the Open Space Index, New Yorkers For Parks and Manhattan Borough President Scott Stringer will conduct a pilot neighborhood study in the Lower East Side of Manhattan.

The first phase will be a complete evaluation of the existing open space in the neighborhood using a combination of existing digital mapping data and field surveys. The project will also feature a comprehensive survey of users at at least one park in the neighborhood. This will help assess the open space priorities and needs of area residents. We will also conduct two community workshops to elicit feedback on preliminary findings and end results.

We will compare the current actual condition of open space elements on the Lower East Side with the targets outlined in the Open Space Index. Each individual factor (tree canopy cover, acres of active recreation space, etc) will receive a score based on how close the area comes to the "target."

An Open Space Index Summary Report will provide a picture of the open space opportunities, qualities and features of the Lower East Side. This report will provide a basis for negotiating with the city and with builders on how to modify and improve development plans and community benefits packages.

Once this test project is complete we will evaluate it and consider how what we learned on the Lower East Side can be applied to other neighborhoods in Manhattan and throughout the city as a whole.

As the wave of development in New York City continues, the importance of open space becomes more critical. More and more, communities must negotiate with developers to obtain their fair share of scarce open space. Building on PlaNYC, creating a clearer picture of what a neighborhood needs can empower communities to foster projects that promote the sustainable development of our city.

MicaĂ©la Birmingham is the planning director of http//www.ny4p.org New Yorkers for Parks, the city's oldest and leading citywide park advocacy organization. To get involved in the Parks 2030 project, contact This email address is being protected from spambots. You need JavaScript enabled to view it. or call 21-838-9410. Â