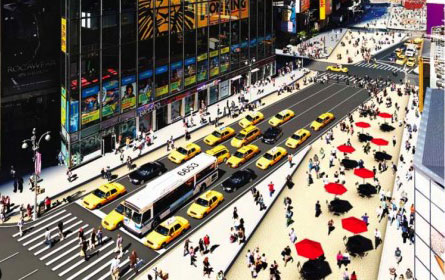 Legislation has been introduced in Congress that would provide federal funding for urban parks and recreation for the first time in eight years.

The Urban Revitalization and Livable Communities Act (H.R. 3734), introduced by Rep. Albio Sires of New Jersey, reflects the current thinking that parks and recreation are integral to broader efforts to rebuild the economic and social fabric of cities.

At the same time, the Obama administration has created a partnership among federal agencies to promote urban sustainability and Congress is considering a number of bills to promote smart growth, bicycling, walking, mass transit, green infrastructure, historic restoration and the reduction of carbon emissions. Together, these initiatives signal new level of federal interest in improving the quality of life in cities.

"We need to look at the ways in which we can improve and enhance the communities where we all live, work, learn and play to truly address national issues such as climate change, water conservation and obesity," said Stacey Pine, chief government affairs officer at the National Recreation and Parks Association. The association, a national not-for-profit dedicated to advancing park, recreation and conservation efforts, played a key role in developing the Livable Communities Act. It is lobbying to move the bill through Congress, together with other members of the Urban Park Coalition, which includes national planning, bicycling, conservation, sports, health, youth and other organizations.

Over the past few decades, the restoration and creation of parks has helped spark a revival of cities around the country. In New York City, fixing up parks, beginning in the 1980s with Central Park, and building new open spaces, such as the High Line and Hudson River Park, has transformed neighborhood after neighborhood and boosted the city’s economy as a whole.

As numerous studies have shown, well-maintained and used parks increase real estate values in the surrounding area and generate tourism and other economic activity. Access to parks and recreation also improves the physical and mental health of residents, lowers crime, connects children to nature and brings neighbors together. By cooling and filtering the air, absorbing stormwater runoff and providing habitat for migrating birds and other wildlife, parks and natural areas make a city more environmentally sustainable.

"There should be mechanisms that encourage cities to think about their park needs in the broadest possible terms of city revitalization, and not just a park here and there," said Peter Harnik, director of the Center for City Park Excellence at The Trust for Public Land. "I think we’re on the cusp of some major changes. Some of the new parks, like Millennium Park in Chicago, or refurbished parks like Central Park, are really giving impetus to this kind of thinking."

Beginning in the 1970s, two federal programs administered by the U.S. Department of the Interior provided funding that made possible many significant state and local park projects as well as inner-city park rehabilitation, maintenance and recreation programs: the Land and Water Conservation Fund and the Urban Park and Recreation Recovery Program.

But spending from the two funds has almost never reached the level authorized: $900 million a year for the Land and Water Conservation Fund and $725 million over five years for Urban Park and Recreation Recovery. Over the last eight years, Congress appropriated just a fraction of the amount authorized for the land and water fund. The urban park recovery program has not received any funding at all since 2002.

In early November, Sens. Jeff Bingaman of New Mexico and Max Baucus of Montana introduced legislation to fully and permanently fund the Land and Water Conservation Fund. Park and recreation advocates are working to find congressional support to update and broaden the Urban Park and Recreation Recovery Program and authorize new funding.

The Urban Revitalization and Livable Communities Act ties funding for parks and recreation infrastructure to revitalizing communities, improving public health, reducing crime and promoting economic development. The bill authorizes spending $445 million over 10 years in grants to states, local governments and community-based non-profits to rehabilitate existing parks and recreational facilities and construct new ones. The Department of Housing and Urban Development would administer the program.

Rep. Edolphus Towns, whose district in Brooklyn could serve as a prime example of how a lack of park and recreational options exacerbates a host of social ills, including crime and obesity-related health problems, was one of the original co-sponsors of the bill. He said in an email, "For many urban areas that suffer from deteriorating community facilities, limited green spaces and juvenile delinquency, this bill helps to develop a widely needed recreational infrastructure."

The legislation has 89 co-sponsors so far, with support from both parties. It has the backing of the TriCaucus, made up of members of the Black, Hispanic and Asian Pacific American caucuses, as well as the recently revived Livable Communities Task Force of the Democratic Caucus. The task force, chaired by the leading smart growth proponent in Congress, Rep. Earl Blumenauer of Oregon, aims to develop a legislative agenda to address how federal policies can support local efforts to improve citizens' quality of life in areas such as transportation investments, tax incentives and environmental protection.

Last spring, the Obama administration announced a new Partnership for Sustainable Communities between the Transportation and Housing and Urban Development departments, since joined by the Environmental Protection Agency. The partnership aims to coordinate federal support for sustainable growth and integrate transportation, housing and land use planning.

Federal funding for urban parks and recreation is all the more important given the financial straits of the states and cities. Tying parks to a whole slew of related initiatives to make cities more livable and economically viable is a good strategy for parks supporters. And improving and increasing the number of places where children can play outdoors, get involved in sports and experience nature and where city-dwellers can exercise, meet their neighbors and get a breath of fresh air is a good strategy for renewing America’s cities.