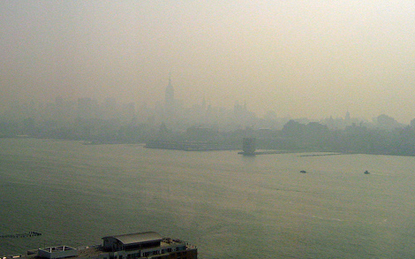 The New York State Department of Environmental Conservation recently predicted that the downstate region of New York State (including all of the city, plus Long Island and the lower Hudson Valley) soon will meet the federal annual health standard for soot (a.k.a. fine particulate matter), for the first time ever.

This prediction came in the department's draft plan, released last month. It is good news for anybody who breathes - and it's worth understanding what is working and what isn't.

Public health experts agree that this kind of soot pollution is one of the most dangerous forms of air pollution. In the U.S., tens of thousands of premature deaths are attributable to soot pollution annually. Roughly 4,000 such deaths occur in New York City every year.

Soot pollution creates real-world impacts beyond statistical premature deaths. Dozens of studies have shown that soot particles trigger asthma attacks and emergencies, bronchitis, cancer and heart disease. Plus, the black carbon core of many soot particles has been linked to global warming and especially related to melting sea ice in the Arctic. In fact, some scientists believe that this black carbon may be the second most important global warming pollutant after carbon dioxide.

How the System Works

Under the federal Clean Air Act, the U.S. Environmental Protection Agency is required to set "National Ambient Air Quality Standards" for six common, so-called criteria pollutants. Besides particulate matter, these include ground-level ozone, carbon monoxide, sulfur oxides, nitrogen oxides and lead. These standards are health standards - in other words, EPA sets the limits based on its best understanding of the effects of pollution on human health and environmental welfare. To arrive at this, the agency uses scientific criteria and periodically reviews the most up-to-date literature. EPA does not look at technical feasibility or costs in setting these standards (those only come into play when the states devise strategies to meet the standards).

Once EPA sets its standards, states have to monitor their air quality. If an area fails to meet the standard, the EPA designates it is as a "nonattainment area," which triggers a legally enforceable obligation for the state to create a plan to reduce the pollution on a set timetable. If a state ignores this obligation, it risks losing the right to control its own pollution and could face extra pollution hurdles for any new industry. In extreme cases, a state could even lose its federal highway funding.

In 1997, EPA set its most recent standards for annual and daily exposure to fine particulate soot. These standards limit our exposure to particles that are no larger than 2.5 microns in diameter. To get a sense of how small these particles are, about 70 of them could stretch across the width of a single human hair. The particles are so small that they can easily evade the defense mechanisms of our noses and throats, and lodge in the deepest depths of our lungs.

How is NYC Meeting the Standard?

The Clean Air Act allows states to figure out the best, most cost-effective ways to cut pollution in their own air. Strategies that work best in Houston or Los Angeles may not work well in New York or may not be the cheapest way to achieve the desired pollution reductions.

Here in New York, diesel pollution lies at the heart of our soot problem. Back in 1995, the state Department of Environmental Conservation identified diesel engines as the source of more than half of the particulate soot pollution breathed by New Yorkers on the sidewalks of Madison Avenue. This led to a broad campaign to clean up the buses in New York, and for the EPA to adopt cleaner federal standards for new diesel engines.

In 1998, EPA adopted new standards that would cut diesel pollution from new engines by 40 percent, starting in 2004. (Thanks to a consent decree in litigation against the nation's engine makers, these cleaner engines hit the market in October 2002.) By 2000, the state agreed to clean up the Metropolitan Transportation Authority buses, with a comprehensive program to use a cleaner, ultra-low sulfur diesel fuel; retire the oldest buses and replace them with the cleanest, new buses available; and to retrofit the remaining buses with advanced soot-busting filters.

The clean-up of the MTA New York City Transit fleet has been a smashing success. Today, the fleet emits 97 percent less particulate soot pollution than it did in 1995, when the Natural Resources Defense Council ran ads on the buses that read "Standing behind this bus could be more dangerous than standing in front of it." The fleet's early commitment to hybrid-electric buses was a smart bet against higher fuel prices that pays off with every mile. And, the fleet's clean-up program serves as a model for large city fleets around the globe.

The MTA program also helped lay the technical and political foundation for the national cleanup of diesel trucks and buses. EPA adopted new pollution standards for trucks and buses in 2001 that, in effect, nationalized the fuel and emissions goals of the MTA program: ultra-low sulfur diesel fuel for all buses and trucks, plus at least 90 percent emission reductions from all new engines.

The New York State draft plan for particulate matter shows that these programs to reduce diesel pollution are working. Since 2002, diesel soot emissions have been cut by 54 percent.

In contrast, the state's data show clearly that pollution from other sources has not decreased. "Point" sources (large facilities like refineries or power plants) and "area" sources (smaller sources that collectively add up to a lot of pollution citywide, like heating units in residential buildings) have actually gone up by almost 12 and 8 percent, respectively.

In other words, thanks to cleaner diesels, New York is on the path to cleaner, safer air.

New Yorkers cannot breathe easily yet. We still fail to meet the EPA standard for ground-level ozone (smog), which is highest in summer months. A city law that requires contractors to cut pollution from their construction equipment is being widely ignored, and few of the city's school buses use the most advanced soot filters to protect the children riding them. And, when EPA designates nonattainment areas for its daily particulate matter standard late next year, it's likely that New York will have to take further steps to reduce its soot pollution.

But for several years, it's been clear that New York -- and the diesel industry -- have been investing in cleaner diesel fuels and soot-cutting technologies. Now, for the first time, we can see the long-term data trends to confirm this, and the real-world benefits of these investments.