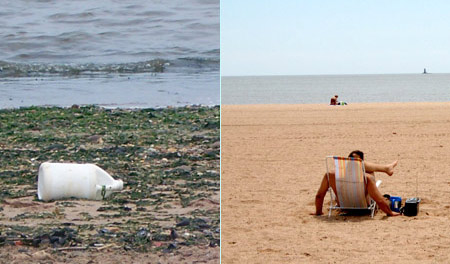 Coney Island Roller Coaster:
The fight over how to develop the famed beach continues with fate of the famed rides and amusements at stake.

Midland Beach and Wolfe's Pond Beach are both on Staten Island and operated by the city's parks department. Roughly the same size, they both stretch about one and a half miles along the shoreline. And on a Monday afternoon in July, the two beaches each boasted one lone swimmer bobbing up and down amid the waves. The similarities ended there, according to New Yorkers for Parks. In its 2007 Report Card on Beaches, the group ranked Midland Beach the best in New York City. Wolfe's Pond Beach came in last.

New Yorkers for Parks, an independent watchdog group, began releasing its Report Card on Beaches in 2003. The rating assesses the seven beaches controlled by the parks department, comparing them to one another as well as from year to year. The group grades beaches on four features: quality of shoreline and condition of pathways, bathrooms and drinking fountains.

In the 2007 rankings, Midland Beach was the only beach that received an overall ranking of "Satisfactory." Four other beaches were deemed "Challenged" and the remaining two, including Wolfe's Pond, were "Unsatisfactory." (The other unsatisfactory beach was Coney Island.)

Curious about the best and worst beaches in the city -- and how such disparate facilities could be in such close proximity to each other-- Gotham Gazette decided to investigate.

The first thing we discovered was that the age-old mantra of life being about the journey and not the destination is painfully true when heading to Staten Island's beaches. Without a car, there is simply no easy way to access the beaches. Both beaches are at least a 20-minute walk from the nearest express bus stop or the Staten Island Railroad.

Midland Beach had the highest performance rating of any shoreline, and the report noted minimal litter and debris along the beach. The Report Card found the pathways a minor challenge, facing overgrowth and warping or breaking of the asphalt. The bathrooms received a grade of 65 percent due to general disrepair. Drinking fountains at Midland Beach ranked best of those at any beach, though they still only received a "D" because of poor structure and repairs.

Upon arrival at Midland Beach, it was quickly apparent as to why it scored well. With over 300,000 visitors a year, the beach offers an impressive expanse of well maintained somewhat orange sand leading down to the water. Sturdy woven plastic mats stretch across the sands leading to the water, making the beach easily accessible by wheelchair. Families push strollers down the mats and then lift them onto a nearby spot in the sand.

"Minimal" presence of litter, as the Report Card phrases it, can be a relative term, and there were wrappers and plastic bottles in the sand nearest to the water. The rest of the area was cleaner, though, and trashcans were not overflowing. Ten lifeguards surveyed the scene, and most families clustered around their towers. The sound of laughter and children shrieking things like "I see a whale!" followed by "No, it's a shark!" carried along the light breeze, as did a slight fishy odor.

The bathrooms were a bit dark and wet, but each stall had toilet paper, and the sink area had soap and a working hand dryer. The showers were also in good condition, and there was a covered changing area. Drinking fountains were few and far between, and seemed to be in fairly poor condition.

Peter, a lifeguard, said that the beach is frequented mostly by families and gets especially busy on the weekends. He cited the murkiness of the water as the area's only drawback.

That murkiness did not seem to concern Mona Lozah and her three children. A resident of Staten Island, she said that she prefers Midland to the nearby South Beach or Coney Island Beach, the other two parks department beaches she has visited. When asked why, she said, "Parking!" and gestured to the massive and almost empty parking lots. She also praised the beach for its cleanliness, lack of insects and family friendliness. Her kids, totally absorbed in their construction of a sand castle, seemed to agree. 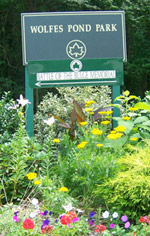 No laughter rang across Wolfe's Pond Beach. In fact, there were no sounds on a July day except the wind, the waves and a circling police helicopter. The entire shore was littered with seaweed, shells and driftwood, as well as broken glass, empty alcohol bottles, a gallon jug of bleach, an old tire, and a rusting metal folding chair. The smell of fish was far more than slight. We could not find the two informal ramps that the parks department Web site says can be used for wheelchair access.

While the Report Card noted that the section of shore open to the public at Wolfe's Pond was well maintained, it cited overwhelming debris, including safety hazards such as glass, as the reason for the shoreline's failing grade. The pathways were rated on par with the rest of the beaches, but New Yorkers for Parks found the bathrooms were closed and locked, accounting for their failing score. There are no drinking fountains on the beach, though there are plenty to be found in the adjoining Wolfe's Pond Park. 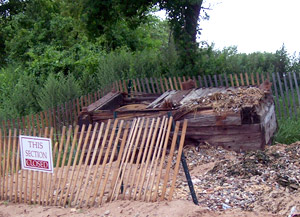 Three lifeguards were on duty for the miniscule stretch of beach open for swimming. Pointing to the piles of debris covering the sand near the water, the lifeguards, who would not give their names, said that beachgoers needed to wear shoes or water shoes at all times for safety. When asked if people swim in the water, they replied "Unfortunately." On its Web site, the parks department mentions the large amount of seaweed at the beach, but that seemed to be an understatement as each wave turned over fresh mounds of green leafy plants.

Asked to name the best part of the beach, one lifeguard cited the lifeguards. More seriously, another replied, "The park." 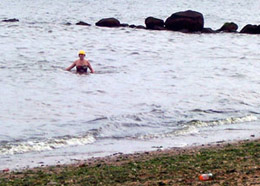 Photos by Olivia Warren
A lone swimmer at Wolfe's Pond

Sure enough, walking up the worn wooden steps to the park seemed like entering another world. Manicured lawns led into playgrounds and picnic areas where families barbecued. Teenagers skated around a roller hockey rink or swatted balls at the tennis courts. Clean drinking fountains and bathrooms abounded.

In response to reports on conditions at Wolfe's Pond and other beaches, the parks department cites statistics from its own Parks Inspection Program, which, it says, shows conditions have been improving. "By every measure, New York City's beaches are in better shape now than at any other time," a spokesperson said. However, the department acknowledges that "litter on public beaches is a primary concern" and asks the public to help.

Our visits did show improvement at the Staten Island beaches since last year's Report Card was compiled. Midland Beach had been using one bathroom as a storage space for desks, according to the report. This year, there was no furniture to be found.

New Yorkers for Parkers marked down Wolfe's Pond Beach for not having signs barring swimming in closed areas. This year, behind some trees, you could read a sign that said "Swimming Prohibited: No Lifeguard on Duty."

Beachgoers will more than likely obey.