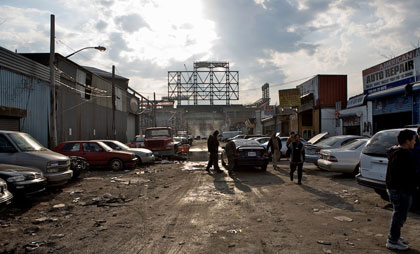 Adjacent to the Mets' new home at Citi Field, Willets Point houses the New York area's largest concentration of auto repair and service businesses, the nation's biggest distributor of Indian foods and several waste transfer facilities. All that could change dramatically, though, if the Bloomberg administration has its way and transforms the area into the city's first "green" neighborhood.

The mayor's proposal has raised the ire of local business owners and housing advocates, who decry the plan's use of eminent domain to seize the commercial property and contend that it does not include enough affordable housing. Those opponents turned out in full force on Wednesday at the City Planning Commission's public hearing on the project.

Small business owners and community activists waved signs condemning the use of eminent domain, while shouting "Willets Point is not for sale."

The commission is in the process of a 60-day review period on the project. It must make a decision by September 29. If approved, the City Council would then take over, making the ultimate up or down choice on the sprawling development. The outcome of that decision is anyone's guess, since a number of City Council members (including Councilmember Hiram Monserrate who represents the area) strenuously oppose the project.

Surprisingly, amid all the controversy swirling around Willets Point, very few have questioned whether the city's "first green neighborhood" will eventually be submerged by water.

Known as "the Iron Triangle," Willets Point is legendary for the vast potholes that punctuate its barely paved streets and its lack of a modern sewer system. Evidence of polychlorinated biphenyls (PCBs), heavy metals, pesticides, herbicides and rodenticides also have been found throughout the district. No one disagrees that the area is sorely in need of improvement. In fact, local business owners have lobbied the city for years to repair potholes and install an updated sewer system. But the city has maintained that because the area is located in a flood plain, it cannot install a sewer system with the current owners in place.

Then in 2007, city officials announced a long-awaited solution to the problems in Willets Point -- a $3 billion plan to seize 61 acres of the district, raze it, and construct a hotel, convention center, 5,500 units of housing (80 percent of which will be market-rate) and over 2 million square feet of office space, as well as restaurants, a movie theater and retail shops. Even more ambitiously, the city intends to transform Willets Point into New York City's "first green neighborhood," with trees, bike paths and parks, state-of-the-art energy efficient buildings, innovative water management (including the use of green roofs and "graywater systems") and public-transit oriented development. In short, the project fulfills many of the goals outlined in PlaNYC 2030.

But local business owners are not so optimistic about the transformation of Willets Point. On hearing about the plan, they immediately organized to protect their property from eminent domain. They filed a lawsuit accusing the city of "negligent, reckless and willful refusal" to provide infrastructure with the ultimate goal of declaring the area blighted, a condition that can trigger eminent domain. Instead, business owners want the city to fix existing infrastructure and revitalize the area without removing businesses. Many worry that moving to other parts of the city could jeopardize their businesses.

In April, 29 of 51 City Council members signed a letter demanding that the administration "stop the clock" on the land use -- or ULURP -- process to approve the plan. Initiated by Monserrate, the letter states, "We adamantly oppose moving forward with the current redevelopment plan for Willets Point. The plan is deeply flawed, and the opportunity for public consideration has been dangerously absent. We disagree with your decision to pursue ULURP certification for this project. As elected officials, we urge you to reconsider this plan and to engage in a more accessible and transparent process." This week another letter, saying they couldn't vote for the project as is, was sent to the commission with 32 members signed on.

City Council members might also question the administration's definition of "sustainable." Willets Point sits in a flood plain and is close to Flushing Creek and Flushing Bay. Climate experts warn that increased storms and flooding due to climate change pose a potentially dire future for waterfront projects such as Willets Point. Does sustainability end at the year 2030? For how many future generations is PlaNYC 2030 planning?

The Fill and The Flood

"Two of the greatest challenges [at Willets Point] are site contamination and site elevation," states the New York City Economic Development Corporation's Environmental Impact Statement. To address that problem, the city plans to install up to six feet of fill prior to site redevelopment.

The fill will be used to "cap" contamination at the site, sealing toxins underneath a mound of new dirt. The effectiveness of this method for containing contamination is debatable. Caps need to be carefully maintained against the effects of erosion, especially in low-lying areas. More significantly, a report by the Canada's Contaminated Sites Working Group maintains that capped areas are never suitable for further development as capping carries a risk of leakage. Again, low-lying areas close to waterways and estuaries magnify this risk.

"There are good, current and acceptable methods for evaluating these impacts, but the project sponsor has not considered any of them," says climate change expert Linda Sohl in a prepared statement released by the project's opponents. "Furthermore, all of lower Manhattan, including the World Trade Center site and most waterfront land in New York City is in the 100-year flood plain - for some reason the city is not concerned with elevating these areas with fill."

The International Panel on Climate Change predicts that East Coast sea levels will rise by one to three feet by the year 2100, depending on how well we reduce the greenhouse gas emissions that cause global warming. Certainly, a three-foot rise in sea level will not put Willets Point under water. The problem is that even a one-foot rise in sea level (the best case scenario) will likely double the frequency of coastal surging and related flooding. In other words, even if we reduce greenhouse gas emissions by 30 percent, the Union of Concerned Scientists predicts that by 2100, 100-year floods could occur an average of every 22 years. Moreover, researchers at Columbia University's Lamont-Doherty Earth Observatory warn that we will almost certainly see storm surges of more than 20 feet.

Economic Development Corporation officials maintain that the proposed elevations will protect the area from current and future threats of floods. Going a step further, they pledge to keep the area out of floodplain designations, should FEMA update them in the future, although they do not offer any specifics on how they would do that. Development corporation officials also stated that they would adhere to all governmental guidelines including those set by the Department of Buildings and the Department of Environmental Protection, especially as those guidelines shift in light of climate change. Of course, PlaNYC2030, itself, was designed in part to "create a strategic planning process to adapt to climate change impacts."

Beyond that, though, the plan hopes to limit climate change by reducing greenhouse gas emissions by 30 percent by the year 2030. As a result, building a whole new community -- even a sustainable one -- at Willets Point poses an apparent contradiction since constructing a new 50,000-square foot commercial building releases about the same amount of carbon into the atmosphere as driving a car 2.8 million miles.

"No matter how much green technology is employed in its design and construction, any new building represents a new impact on the environment," explains Richard Moe, president of the National Trust for Historic Preservation. At the same time, improving existing buildings and infrastructure almost always produces a lower level of emissions.

In the case of Willets Point, the development offers a particularly ironic twist. In seeking to build New York City's first "green" neighborhood, the city could instead add to global warming and endanger that very same community.