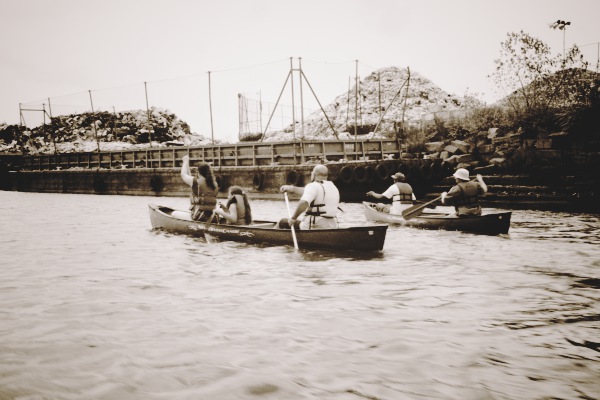 NEW YORK — Left without power, basic supplies, and often potable water, Hurricane Sandy victims in the city's poorest and low-lying areas say they were often forced to look after each other for help rather than wait for the government.

Now, six months after the storm, several grassroots organizations that work in those communities are taking preparations for the next big storm into their own hands by organizing first responder plans and developing their own vision for a sustainable, resilient waterfront.

Calling it “essential” to start the conversation from the local-level, Eddie Bautista, director of the New York City Environmental Justice Alliance, said for too long grassroots groups have “waited and responded” to governmental plans. That is why an umbrella group of grassroots and environmental advocacy groups released its agenda for responding to extreme weather in April.

By releasing what’s billed as the “Sandy Regional Assembly Recovery Agenda” before plans from the city and federal government are released this summer, Bautista said he hopes community concerns can take the lead in discussions.

The agenda aims to reduce infrastructure vulnerabilities, they say, while mitigating environmental hazards posed by flooding in toxic areas. That includes building out the proposed greenways in Sunset Park and the Bronx, projects that could cost almost $150 million but would provide permeable surfaces to help disperse water in serious storm events.

“We've circulated the plan to city, state, and federal officials,” said Bautista, whose organization is a member of the Sandy Regional Assembly, which has over 40 groups from New Jersey to New York City and Long Island.

Other plans in the agenda call for investing $1 million towards upgrading the New York City Department of Environmental Protection’s Port Richmond Sewage Treatment Plant and a half million dollars to build out rain gardens and bioswales on New York City Housing Authority properties.

At a recent mayoral candidate forum, Sandy recovery discussions focused on high-profile ideas like expanding ferry service or large-scale environmental solutions such as storm surge walls. Important as these broad, expensive plans might be, they do not meet the criteria of the Sandy Regional Assembly, which points to more “sustainable” soft-environmental solutions and the needs of low-income areas.

The agenda also calls for emergency generators at all NYCHA properties and re-building with natural, sustainable solutions such as sand dunes that have been eliminated along beachfront areas.

Citing an analysis of Sandy's effects on housing by New York University’s Furman Center for Real Estate and Urban Policy, the Assembly's agenda notes that the hurricane affected 20 percent of NYCHA properties, many of which are by industrial areas, where receding flood waters can spread chemical toxins to waterways and residential areas.

Furthermore, six of the city's “significant maritime industrial areas” are located near neighborhoods with large low-income populations, including the South Bronx, Newtown Creek, Brooklyn Navy Yards, Red Hook, Sunset Park, and the North Shore of Staten Island. The agenda calls for expedited cleaning of the city's Superfund sites, such as the Gowanus Canal.

Environmental cleanup will be part of FEMA's recovery strategy, but Ken Curtin, the federal disaster recovery coordinator for FEMA, acknowledged there isn't the “political will” in Congress to include more funding to clean these Superfund sites.

Even as the Sandy Regional Assembly's plans were circulated to create dialogue, it’s unclear what direction the city’s plans are taking.

In December, Mayor Michael Bloomberg and City Council Speaker Christine Quinn called on the nonprofit Urban Green Council to convene a task force to help draw up plans for making the city’s structures more sustainable and resilient in the face of extreme weather. The task force itself includes over 200 experts, including architects, engineers, real estate owners, contractors and other technical professionals.

The task force is expected to coordinate with the mayor's special initiative for rebuilding and resiliency.

Bautista claimed that the mayor's initiative had not been forthcoming with information, though it has released a partial action plan. The mayor's office didn't respond to a request for comment before press time. A spokeswoman for the Urban Green Council said the organization could not weigh in on the specifics of the task force recommendations until a final report is released this summer.

However, the Urban Green Council has published a summary of broad proposals. Without price tags or locations suggested, the UGC will look to create more permeable surfaces, call for critical building utilities to be placed above flood levels, and consider alternative energy sources such as solar energy and cleaner back-up generators.

But Bautista and other members of the Assembly said they think their voices are being left out of the discussions.

In Sunset Park, Brooklyn, UPROSE — the United Puerto Rican Organization of Sunset Park — said its residents were stung by Sandy, and relied on non-governmental groups to provide supplies instead of the city or state. For instance, the Occupy Wall Street off-shoot known as Occupy Sandy used St. Jacobi's Church in the neighborhood to distribute food, clothing and water.

“Government officials have a standard, traditional way of approaching community engagement,” UPROSE Executive Director Elizabeth Yeampierre said in an interview. “But climate change is and should force them to think differently about the relationship.”

The government, she added, “should stop thinking about communities as things that have to be managed, rather as partners in addressing this complicated issue.”

Already UPROSE has taken the initiative in organizing themselves. “People want to be trained as first responders,” Yeampierre said, adding that UPROSE has begun mapping backyards and coordinating with landlords to reduce impermeable surfaces and add bioswales to better disperse water.

Up in the South Bronx, which escaped Sandy’s wrath but is nonetheless a vulnerable waterfront community, advocacy group Youth Ministries for Peace and Justice is now offering emergency preparedness training, according to Anthony Thomas, the organization’s environmental justice coordinator.

The group has already purchased 10 canoes in case of severe flooding, are putting together plans to prepare go-bags full of medical and emergency supplies, and are spreading the word to people who might not be able to be reached through official city announcements. The effort, Thomas said, affords local communities a measure of control of their own lives that feels absent when dealing with governmental officials.

“People have a fear of government not necessarily taking them seriously,” Thomas continued. “We really want to take things into our own hands. We are the only people who can define the best strategies for our neighborhood, we are the people who know what's needed.”

Although Sandy had a limited impact on the South Bronx, Thomas said early predictions had the storm hitting the area hard. "Who knows what it will be like next time," said Thomas, whose group has learned the lesson the easier way.

To aid in these efforts, lawmakers like Assemblyman Marcos Crespo, whose district includes industrial and residential areas abutting the Bronx River, such as Hunts Point, have looked to bridge the gap.

Crespo introduced legislation to fund micro-grids — miniaturized versions of the usual grid can be disconnected and operate independently — which was incorporated into the state budget. Micro-grids are seen as more resilient than the city's broader power grid, and would generate energy for first-responder needs.

“One of the many lessons learned from Sandy is how much of our critical infrastructure is susceptible to power loss and what can be done to prevent that,” he said.

With hospitals losing power and back-up generators sometimes failing, this micro-grids would better ensure power. Crespo, however, said some of the technical aspects with the micro-grids were still being worked out.

Crespo is also sponsoring legislation that would offer emergency supplies tax-free for two weeks during the year. The state needs to be “more aggressive” when preparing for future disasters, Crespo argued. And that, he said, begins with helping communities be prepared.

But Patricia Simon, director of the Ocean Bay Community Development Corp. in Far Rockaway, said a main challenge is that the scope of the rebuilding remains more than many residents in her area can envision.

She said her group, which is also a member of the Assembly, is partnering with the Pratt Center For Community Development to provide workshops for residents “so people won't feel [officials or contractors] are talking over their heads.”

Flood maps, she said, “have to be broken down,” and the new requirements for homeowners need to be explained. And, she said, “There's always the risk of contractors ripping people off.”

Which is why Thomas said he thinks the responsibility often has to come down to the community rather than waiting for government assistance. "We really want to take things into our own hands. We are the only people who can define what the best strategies are."

Yeampierre said she was unsure if her community was prepared for the next storm, and other problems could arise because of different environmental challenges, such as extreme heat.

"But we've begun to provide the tools so people can take ownership in an emergency," she said.

Image of canoes that could be used in the South Bronx if there's another big storm, photo courtesy of Youth Ministries For Peace And Justice.