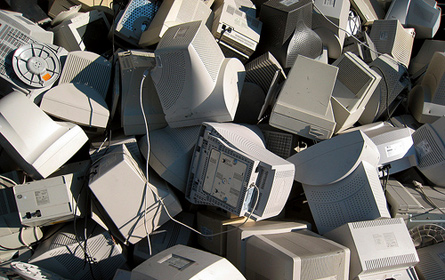 In 2008, New York City enacted a pioneering electronics waste law, becoming the first city in the nation to do so. But the law never went into effect and now the city government and manufacturers are locked in a contentious legal battle over whether producers should take a lion's share of responsibility for collecting discarded electronics.

Before the law could go into effect last July, the Consumer Electronics Association and the Information Technology Industry Council and ITAC Systems, Inc. filed a lawsuit to block it. The New York City Law Department and the National Resources Defense Counci are defending the law.

Oral arguments have been postponed three times since the fall as the two sides try to negotiate a settlement. The case is being heard by Judge William H. Pauley of Federal Court for the Southern District of New York.

"The stakes are high on this," said Barbara Kyle, national coordinator for the Electronics Take Back Coalition. "If the plaintiffs prevail on this, it can call into question legislation on a whole range of products where states are holding manufacturers responsible." For the city -- where only 10 percent of discarded electronics are recycled -- a plaintiffs' victory would add to the growing list of environmental reforms that failed, stalled, or were drastically revised. Manufacturers fear that, if they lose, they will have to comply with a law that they say imposes unreasonable burdens and enormous costs.

Picking Up the Pieces

The proposed law requires manufacturers to plan for and pay the full cost of collecting discarded electronics. Manufacturers must submit an e-waste plan detailing "convenient" methods by which consumers can return items. Manufacturers can be penalized $1,000 for each day the plan is past due, while city residents can be fined $100 for each improperly disposed item. The law covers computers, televisions, computer printers, and i-Pods, but not cell phones or household appliances.

The most controversial provision of the city's plan requires that manufacturers collect items over 15 pounds directly from consumers' residences. Items under 15 pounds can be mailed or dropped off at a collection point. The direct collection requirement -- which no state has -- was not part of the City Council legislation but a regulation from the Department of Sanitation, which governs how the law is administered.

Other highly contested elements of the law include an orphan waste rule, which requires manufacturers to take back certain electronics made by producers that no longer exist, and a performance standard, which sets minimums on how much must be collected.

A Mountain of E-Waste

This law was prompted by an exponential growth in electronic waste and a growing awareness of its dangers.

Junked electronics are the fastest growing kind of waste in the U.S. Americans, who own over 2 billion pieces of high-tech electronics, discard over 3 million tons of them each year according to a 2007 report by the Environmental Protection Agency. Public Advocate Bill De Blasio, a longstanding proponent of the bill during his tenure in City Council, has written that the city spends over $6.4 million a year to export the nearly 30,000 tons of e-waste that travel through its waste stream.

Electronics contain lead, cadmium, mercury, all of which are dangerous when released into the environment, according to the city's brief. Such toxins can leach into groundwater from improperly contained landfills or be released into the air when crushed by compactors or burned in incinerators.

Plaintiffs say the law is unconstitutional, alleging, among other claims, that it would impede interstate commerce and violate the equal protection clause and due process.

But their essential problem with the law is cost. They claim that the city has "devised a program this is in order of magnitude more costly than any other E-waste program in the world."

"The city’s program costs six to eight times more than any other state program, and these excessive costs will be passed back to consumers in the form of higher prices," said Parker Brugge, vice president of environmental affairs for the Consumer Electronics Association. Brugge said that the association estimates the proposed law would cost manufacturers about $200 million annually.

Direct collection alone, according to the Consumer Electronics Association and other plaintiffs, "will cost manufacturers approximately $121, and potentially more, per pick-up from a city residence." James Slaughter, attorney for the plaintiffs, said direct collection is particularly expensive because whenever a customer calls to dispose an electronic item, "we have to come get it."

But the city and the Natural Resources Defense Council dispute the plaintiffs' cost estimates. Kate Sinding, attorney for the Natural Resources Defense Council, said that the plaintiffs' estimates are based on the most inconvenient ways of complying with the law. She said that in reality, "competition and the drive for efficiency would lead manufacturers to find the least costly option for compliance."

In support of this position, Jay Shepherd, a policy advisor from Washington State Department of Ecology, filed written testimony indicating that companies in his state have pooled resources and worked together to come up with cost effective ways of complying the state's e-waste laws.

The city and NRDC also indicate that direct collection is not the expensive, come and get it kind of rule the plaintiffs make it to be. And on the law's face, this is true. The regulation states that for items over 15 pounds, "convenient collection from a resident shall mean direct collection from a resident's home." Slaughter said this implies an on-demand pickup, but Sinding said the regulation is flexible, allowing companies to come out to collect every few weeks or so. The plaintiffs "interpret the direct collection requirement as being an on demand pickup requirement, but there is absolutely nothing in the regulations, or the law, that would compel anything like that," Sinding said.

The city also indicates that direct collection is "narrowly tailored" to New York City, where many residents do not own cars. Without cars, people would have to lug heavy items on mass transit.

Jennifer Carela, a Chelsea resident who hauls her out-of-use electronics on the subway to city-run collection programs, likes the proposed law for its convenience to city residents. "I've used the electronic drop off sites but it's always a production to plan your schedule around them, and I don't think most people care enough to lug their keyboards, CPUs, and TVs downtown to have them disposed of properly," she said.

The manufacturers also complain that the law shifts all responsibility to them, and that is what makes it particularly unfair. In California, consumers pay a fee at the time of sale. "There needs to be a shared responsibility among various stakeholders," Brugge said.

However, the city argues in its brief that one rationale for increasing manufacturer responsibility is that "requiring manufacturers to internalize the costs of recycling covered electronic equipment gives those manufacturers an incentive to reduce or remove toxic materials from products at the time that the products are first manufactured." Eighteen of the nineteen states with e-waste laws have enacted legislation that shifts burdens toward the producer, and such laws have come to be known as producer responsibility laws.

Elizabeth Grossman, whose 2006 book High Tech Trash chronicled how severely production and disposal of electronics affect the environment, said, "If you require a company to take physical and fiscal responsibility of their obsolete products, they've got a whole lot more incentive to make them easier to recycle and last longer."

Nili Belkin, a Park Slope resident, would like to see that happen. She recently got rid of her computer printer merely because the small roller that feeds through paper would have cost her nearly as much as a new printer. She hopes the law will encourage longer lasting, less disposable products.

For now, only 19 states regulate e-waste. The number is likely to grow, according to experts.

The industry has said this matter should not be left to cities and states.

"We believe that electronics recycling is a national issue that requires a federal solution" said Brugge. "It is not feasible for manufacturers to comply with a unique recycling scheme for every municipality in the country."

Kyle noted, though, that what she considers a sound, comprehensive, proposal at the federal level never got off the ground, leaving states to take things in their own hands.

"This is really a fight about state's rights and city's rights," said Kyle.