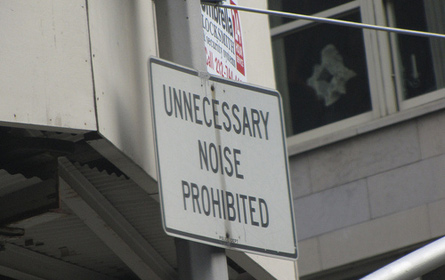 Teens living above an East Village woman laughed at her when she asked them to stop running and jumping all night while her family tried to sleep. An actor in Harlem lived peacefully in his apartment for 10 years until a new renovation left him hearing every tread, scrape and footfall, interrupting his sleep. And a senior citizen with a heart condition in the Upper West Side was called senile and visited by mental health professionals after she repeatedly complained about a next-door neighbor who plays her stereo all night long.

Over 65,000 people complained to the city's 311 line about noisy neighbors in fiscal year 2009, making it the number one noise complaint in the city. This is four times as many as the next most common complaint, street noise, and ten times the number of complaints about noise from a club or bar. And yet, although the city’s vaunted noise code addresses the latter two issues, it offers no provisions to deal with noisy neighbors. Sleep-deprived, frustrated and feeling helpless, those afflicted by loud, uncooperative neighbors often find they have almost nowhere to turn.

"Cities from all over the country quote our noise code," said Arline Bronzaft, an environmental psychologist and chair of the Noise Committee at the Council on the Environment of New York City, "but New York City is in the dark ages when it comes to neighbor noise."

New York City’s updated noise code, which went into effect in 2007, addresses many nuisances outside the home — car stereos and alarms, clubs and bars, barking dogs and construction noise — and calls for enforcement by the city's Department of Environmental Protection or the police department. But the internal din of urban dwellings continues, eroding the quality of life.

Most New Yorkers live in apartment buildings, old and new, that act like finely tuned instruments transmitting the sound of every footfall, toilet flush, dropped object and vibrating appliance — not to mention loud arguments, children playing, pets, musical instruments and, yes, sex noise. Add to that the rumble of modern entertainment systems, manufactured and advertised to maximize bass frequencies that can penetrate nearly any building material. Modern work life exacerbates the tension over noise, as many New Yorkers work at night and sleep in the day or work from home -- and so need quiet during noisy daytime hours.

Studies have found noise to be more than a nuisance. In its Guidelines for Community Noise, the World Health Organization writes, "Noise pollution continues to grow" and "involves direct, as well as cumulative, adverse health effects."

The organization identifies broad categories of negative health effects from unwanted noise including interference with speech and learning, sleep disturbances, cardiovascular and physiological effects, mental health effects, effects on performance and productivity at school and work, and effects on residential behavior and annoyance.

"People say you should just get used to it," said Richard Tur, a New York City resident and founder of NoiseOFF.org. "What’s been lost is that noise pollution is a public health issue."

On a volunteer basis Bronzaft counsels people with neighbor noise problems. Most have approached raucous neighbors who have been unresponsive or downright hostile.

"The country's founders passed a bill of rights," said Bronzaft, "but not a bill of responsibilities."

Calls to 311 are referred to the police for non-emergency response, but the police cannot do much, since there are no specific laws about making a racket in one's own apartment. Officers often arrive on the scene hours after the disturbance, and the most they usually can do is ask the offender to turn the volume down -- and the person can turn it back up when the police leave.

People find themselves rearranging their lives to avoid noise. The actor in Harlem, who asked not to be named because he is taking his landlord to housing court, has curtailed his social life to get to bed earlier. Lu works from home and now breaks up her workday with naps.

Lu said her youngest daughter would wake up crying about monsters upstairs and had a hard time waking up for school.

"I shouldn’t have to schedule my things around the noise and make my sleeping time accommodate the noise," said Lu. "There should be some kind of agency you can go complain to about this kind of noise. We don’t know where we should go."

Under current law, Lu and others like her have few alternatives. But those involved with the issue see a number of avenues the city could pursue to quiet noisy neighbors.

Bronzaft thinks the onus is on landlords to provide a noise-free living environment under a lease’s warranty of habitability. If a tenant gets to the point of suing, she said, the complaint should be against the landlord and not the other tenant. She also thinks that the city or state government should require that the warranty of habitability in leases specifically promises a residence free from noise.

New York City Councilmember Daniel Garodnick agrees that explicit provisions dealing with noisy neighbors in standard leases would be a useful tool but questions whether the impetus for such a change should come from the city.

"It happens to be in the best interests of landlords and tenants to explicitly set out rights and privileges of every apartment at the outset," said Garodnick. "That route could be done independently of government.”

But in the absence of neighbor noise laws, landlords have fewer tools to try to quiet things down.

"[Noise] is one of the most difficult complaints for a landlord to deal with," said Elizabeth Crane, a landlord with nearly 1,000 tenants, mostly in the Bronx.

Crane says she gets noise complaints all the time and always addresses them because she does not want to lose good tenants to noise. She starts out with gentle letters but it can end up in a court action costing her thousands of dollars in legal fees and lost rent.

The Law of Common Sense

"Your right to make noise stops at my ears," said Bronzaft. The problem, she said, is that "you can't legislate decency."

Many cities try. Los Angeles, Dallas, Atlanta, San Francisco, Boston and Detroit all have laws against high volume neighbors. Usually the laws give some decibel threshold, and set fines for offenders. In London, England an individual fine for making too much noise can go up to 5,000 pounds.

"The issue with decibel measurement," said Tur of NoiseOFF, "is that the real question is what effect is the noise having on a person's life. If you can't enjoy your apartment or sleep at night, it's hard to put a number on that."

"If it can be proved a neighbor is causing noise," said Tur, "police should have enforcement by way of police summonses or fines. I think that's reasonable."

Louis Hagler, a retired physician who has written extensively on the health effects of noise, goes further. "If [a neighbor's noise] comes into my residence," said Hagler, "it’s a criminal assault and should be treated that way."

Garodnick said he is interested in exploring whether neighbor noise should be included in a law passed by the city. But he cautioned that violations can be difficult to substantiate.

"You still need a ticket writing authority to be there to experience it," he said.

And what about those unintentional everyday living sounds that drive New York City apartment dwellers crazy?

"I can’t tell people to take off their shoes or not to go to the bathroom in the middle of the night, or not to move a chair," said landlord Elizabeth Crane.

How a building is constructed has a lot to do with how it conducts sound. Sound transmission class (STC) is a method for measuring how much sound a barrier, such as a wall, blocks. STC ratings have to do with the types of construction techniques and materials used in buildings. In a survey of residents of row houses and apartments, the National Research Council of Canada found that annoyance over neighbor noise dropped when walls had an STC of 50 or above and stopped completely at 60.

New York City's updated building code requires a minimum STC for airborne sound of 50 in dwelling units, but it only applies to new construction. Research by Quiet Solution, a company that manufactures soundproofing materials, has found that dampening the sound of a medium-size home theater requires an STC of 60.

"The building code could be another route to addressing these issues, and that would most certainly be within the city’s jurisdiction," said Garodnick.

Let’s Talk This Through

Short of such changes, the solution to all-out neighbor wars over noise can be quite simple — laying carpet, wearing headphones, moving the TV or, in one of Bronzaft’s cases, painting a line on a radio's volume knob — if the parties are able to talk to one another.

"A noise dispute is really an interpersonal issue," said Melissa Appleton of the Manhattan Mediation Center at Safe Horizon.

Noise disputes account for some of the center’s most common cases. Residents can call 311 for a referral to their mediation services. If the other party won’t participate, Safe Horizon will work with complainants to help them communicate with their neighbor.

"If people were more aware of mediation before conflicts escalated," said Appleton, "it might effectively change the number of lingering and protracted noise disputes in the city."

But some residents say they might have to take more draconian steps and move. The senior citizen on the Upper West Side does not want to leave the home where she feels safe and knows people. But she believes she has tried everything else she can think of to deal with the noise.