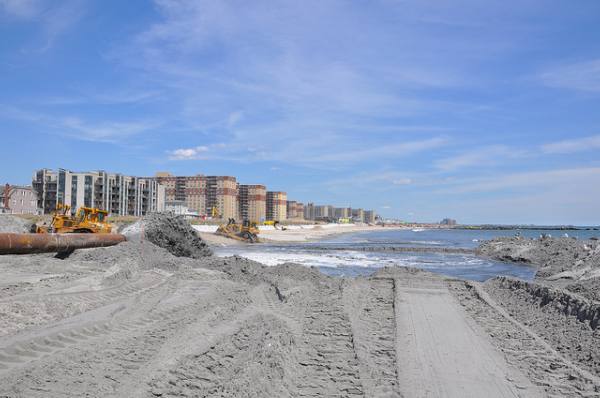 The city has decided to reconvene two community advisory task forces that weighed in on Mayor Michael Bloomberg’s multi-billion dollar plan to protect the city from future extreme weather and the effects of climate change in the wake of Superstorm Sandy, the city’s resiliency director told the Gotham Gazette/AdaptNY in an exclusive interview. The task forces will resume meeting this fall.

Daniel Zarrilli, the city’s director of resiliency, also said yesterday that there would be “broad-based outreach” to some of the city’s hardest-hit neighborhoods as part of a Department of City Planning study that will examine “how we can ultimately build more resilient communities.” The study will examine issues such as the city’s building codes and the new national flood insurance maps.

The announcements come as the city fields criticism about community involvement in its climate change planning process as detailed in an investigative report by Gotham Gazette and AdaptNY, a digital news platform.

One of the task forces to resume work, made up of elected officials and community board chairs from the areas of the city most impacted by Sandy, had met monthly in the five months leading up to the release of the mayor’s plan in June, Zarrilli said.

A second task force was “composed of community organizations from the impacted areas, which the community boards were also heavily involved in,” Zarrilli said. He noted that “in some cases they [the boards] hosted the briefings and brought together local leaders.”

As part of a special investigative report, Gotham Gazette/AdaptNY surveyed 11 of the 18 community boards representing districts hardest-hit by Sandy.

In part 1, we documented how half of the community boards that represent the hardest hit areas do not feel they and the city are communicating well on rebuild and resiliency questions, despite the city’s intense focus on these issues. Part 2 zeroed in on the concerns of a half-dozen of the boards, which confront issues ranging from storm surge protection to soaring flood insurance rates to the demise of storm-battered businesses.

The city’s 59 community boards, the most localized form of representative government in New York, currently have a non-binding vote within the city’s land use review process.

Some boards have argued that they should be more formally integrated into the city’s climate change planning process. Said Jonathan Gaska, the district manager for Queens CB 14 in the Rockaways, “Our big concern was there was not an official community board process — no ULURP [Uniform Land Use Review] process, no hearings. They didn’t treat us like a government body that represents 130,000 people.”

Zarrilli said that arguing that the city has not been listening to the boards is “not quite right. We’ve been out and responding to community boards,” Zarrilli said, referencing Gotham Gazette’s/AdaptNY’s reporting. “Every neighborhood is different.” He added that some of the boards were equally concerned about whether all the city’s resilience proposals could even be funded.

When asked if the community boards had a legitimate place at the table in terms of planning for climate change, City Councilwoman Gail Brewer of the Upper West Side said, "of course", but argued that the boards needed more support to participate fully in complex infrastructure and land use questions.

Brewer stressed that the boards had an equally important role in terms of identifying and serving the city's most vulnerable populations in the event of another major storm. "They know the neighborhoods, the city does not," Brewer said, adding that the Council would be passing legislation on Wednesday requiring that a centralized list of vulnerable populations be made available to emergency and first responders.

The document includes over 200 initiatives designed to rebuild the five sections of the city that were particularly hard hit by Sandy — Lower Manhattan, south Brooklyn, south Queens, the Brooklyn-Queens Waterfront, and the eastern and southern shores of Staten Island — and increase climate resilience citywide. It was intended as a long-term roadmap that could be used by future administrations.

The report was prepared by the city’s Special Initiative for Rebuilding and Resiliency.

The Bloomberg administration maintains it has made an extensive effort to solicit community involvement as it rebuilds from Superstorm Sandy and plans for future storms, and argues that this engagement will continue. “We heard lots of good feedback,” Zarrilli said yesterday. He said turning the initiatives proposed by the city into reality would require more outreach to the public.

“Each one of those is going to take its own path towards implementation,” he said.

Zarrilli said that it was impossible to comment on whether the next mayoral administration would consider expanding the role of community boards in the city’s ongoing resiliency planning process. A spokesman for mayoral front-runner Bill de Blasio said that the Democrat did not have a position on the issue, nor had he indicated a position on engaging community-based organizations generally speaking in climate change planning efforts.

But de Blasio does support “formalizing” city collaboration with community-based organizations as emergency first responders in the event of another catastrophic storm.

The public advocate’s office released a report in June which maintained that community-based organizations “represented an under-utilized resource” in the city’s ongoing efforts to prepare for the future impacts of climate change. “Hurricane Sandy revealed the latent weakness in New York City’s efforts to reach communities in need and providing vital aid,” the public advocate’s report went on to say. “The city must take immediate action to establish partnerships with CBOs and ensure they have the necessary support to assist communities.”

While Republican mayoral candidate Joe Lhota could not be reached for comment on community involvement, his on-line “policy book” calls the city’s SIRR plan “commendable.” Lhota states that he would continue work on the city’s “ambitious” plan to create a system of flood barriers, which will “protect New York City’s critical infrastructure and vulnerable neighborhoods,” if elected.

The Need for Follow-Up

After the city stopped gathering information for the SIRR report in May, it no longer appears to have engaged the community boards or other local groups as systematically. The city moved on to finalizing its analysis, disseminating the results, and trying to get projects off the ground. A number of community boards in the hardest-hit districts have been looking for ongoing follow-up and raised a wide variety of issues with Gotham Gazette/AdaptNY.

Zarrilli said the boards have had an ongoing channel of communication with City Hall via the community affairs unit of the mayor’s office.

But Gaska of Queens CB 14 in the Rockaways said he did try to follow through with questions on local concerns. “Did we speak with the Community Affairs Unit? Absolutely. Did they communicate it to City Hall? Who knows.”

“I wish that it was a much more collaborative effort,” he continued. “One of the most important tenets of planning is you keep the stakeholders involved, and that really didn’t happen …. Democracy can be ugly and time consuming [but] that’s the process we have.”

However, other boards reported better communication with the community affairs unit.

Gigi Li, who chairs CB3 on Manhattan’s Lower East Side, said that her board has an “open line of communication” with the community affairs unit. She said that, both through the unit and by participating in the advisory task force, “some of our concerns have been addressed”.

Li said that CB3 “would have liked” more involvement with the city on resiliency planning questions since the release of the SIRR report, but added that there has been more opportunity for dialogue in the last two to three weeks.

Community boards in the hardest hit areas told the Gotham Gazette/AdaptNY they are searching for more effective ways to insert themselves into the climate change planning process.

The boards also have the unique quality of being part of government, even as they are also considered part of the local community.

Courtney Smith, the Municipal Art Society’s resilience and community engagement project manager, pointed out that neighborhood-based planning was not a focus of the SIRR report but maintained that community boards “are a critical part of the rebuilding process.”

“Regardless of any government-driven rebuilding process, to be sustainable and relevant, communities must be the drivers of the community plans and be involved in the decision-making that directly affects them,” Smith said. “Many residents have lived in these impacted neighborhoods for decades, and are experts on the conditions and experiences in their neighborhoods.”

But it will be the next administration’s task to decide how to integrate community boards into the city’s planning process.

The stakes are high. Forty-three New Yorkers died during Superstorm Sandy. Thousands more lost their homes or businesses or were temporarily displaced. The Bloomberg administration estimates that Sandy cost New York City $19 billion in losses. And climate change marches on.