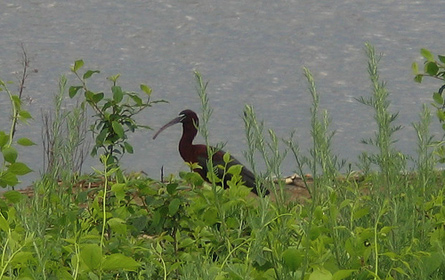 Photo by Unforth
The marshes of Jamaica Bay have been shrinking for decades, essentially vanishing into New York's toxic waters.

The largest urban wildlife preserve in the United States sits adjacent to Kennedy Airport, near the high-rise apartments of Starrett City and the Rockaway housing projects. Home to the peregrine falcon, the loggerhead sea turtle, the short-eared owl, the area -- Jamaica Bay -- at the intersection of Queens, Brooklyn and Long Island, serves as a stopover for 20 percent of American bird species on their annual migration along the East Coast.

For years, though, this estuary, a shallow marsh where fresh and saltwater meet, has been vanishing into the toxic waters of the New York City harbor, losing an estimated 33 acres annually to deterioration, nitrogen buildup and rising sea levels. Spanning some 16,000 acres about a century ago, the salt march islands have shrunk to a mere 800 acres. Thought not nearly as dramatic as the environmental catastrophe now confronting the Louisiana coast, the threat to Jamaica Bay could completely destroy the marsh by 2024, decimating the home for an abundance of rare and endangered plants and animals.

"Marshland completely changes the nature of the bay," says Larry Levine, staff attorney for the Natural Resource Defense Council. "If it were to ever disappear and become open water, it would be a tremendous loss of natural habitat."

Now, the federal state and city governments, prodded by citizen's groups, have stepped up their efforts to preserve the area. This year, government and private groups collaborated to update the Jamaica Bay Watershed Protection Plan to try to avert disaster in the urban refuge. Whether government will keep its commitment and whether its actions can reverse the decades of deterioration remains to be seen.

Destruction of an Ecosystem

Spartina cod grass anchors the land of the marsh in place. To survive, the grass must receive fresh water rich with oxygen and nutrient-loaded sediment. Small streams in Queens and Brooklyn once provided this, but many of these vital veins have been paved over the decades.

Four sewage plants ringing Jamaica Bay contribute further to the deterioration of the marsh by spewing 250 million gallons of nitrogen and large amounts of chlorine into the water every day. Ironically the nitrogen has worsened since 1992 when the government, in an effort to prevent pollution, banned the dumping of sewage into the ocean and instead diverted the treated wastewater into the bay. The excess nitrogen in the water is naturally converted into hydrogen sulfide, which kills the roots of the marsh grass.

In this nitrogen-rich environment, weed-like algae blooms thrive, suffocating the estuary by draining it of dissolved oxygen. Algae blooms kill the thousands of fish found floating belly-up in the very waters that are meant to nourish them.

In addition, during heavy rains, untreated oils and toxins wash from nearby streets and parking lots when storm drains overflow and end up in the bay. The bay also shares many of the contaminants that pollute the rest of New York harbor, such as dioxins, PCB particles, and mercury.

Photo by Gail Robinson
Humans have taken their toll on Jamaica Bay.

Next-generation issues also are emerging, explained Levine. Studies show that Jamaica Bay flounder are affected by pharmaceuticals flushed through the sewage system and not removed by treatment plants. The population of male flounder has drastically diminished because of the feminizing effects of endocrine-disrupting chemicals -- a pattern Levine says is being observed around the world.

Dan Mundy, founder of citizen group EcoWatchers, noticed that Jamaica Bay was ailing in the mid 1990s. By 2000, he said, as many as 50 acres of saltwater marsh were being lost every year. And in 2002, the state authorized a study of why the marshland might be vanishing.

It was not until 2005, though, that Mayor Michael Bloomberg signed a measure calling for the city Department of Environmental Protection to devise a plan to save the bay and creating a seven-person advisory task force. The committee included community activists and representatives of nonprofit organizations and government agencies. The resulting report presented a number of options, including installing storm sewers for flood prevention, dredging and re-contouring creeks, restoring eroded land, re-oxygenating the water and hiring pump-out boats to clean waste. Overall, the committee wanted visitors to Jamaica Bay and the government to be more vigilant of the estuary's condition.

Gradually, steps to restore and preserve the marsh began. Between 2006 and 2007, the U.S Army Corps of Engineers allocated $13 million to restore Elders Point East, an island marsh which once spanned 132 vegetated acres, but which had broken apart to a mere 21 acres.

By 2010, New York City faced a possible lawsuit under the federal Clean Water Act. The threat spurred intense negotiations between citizen groups, the Department of Environmental Protection, then Deputy Mayor Edward Skyler and other City Hall officials. The city, according to Mundy, expressed concern about the cost of the technological upgrades needed to address the nitrogen problem, but over time became convinced that the installations were necessary for the bay's survival.

In February 2010, Bloomberg announced the city would commit $115 million for a combination of efforts to safeguard the only wildlife refuge accessible via subway. As part of that, he said New York would spend $100 million to install new nitrogen control technology at sewage treatment plants on the bay.

Don Riepe, who headed negotiations on behalf of the American Littoral Society, said the city pledged another $15 million to support marsh restoration. The Army Corps of Engineers will match the restoration funds two-to-one.

The first of the plant upgrades will begin operating in 2014. Technology to control nitrogen will be installed at the 26th Ward and Coney Island wastewater treatment plants in Brooklyn, and at the Rockaway plant in Queens. These efforts are predicted to reduce nitrogen discharges by 50 percent over the next decade and to allow the bay to filter its waters over time.

Reclamation of Elders Point West Island has already begun. Clean fill, or "slurry" -- muck being dredged from waters around the city -- is currently being shipped from the harbor and Long Island and will become 35 new acres of marsh. The U.S Army Corps of Engineers is hand-seeding Spartina grass into the fill. When they finish this at the end of the summer, they will move on to reclaim Yellow Bar island.

Photo by Gail Robinson
Restoring grassland is essential to the survival of marshes so many animals call home.

Wave attenuators, marina-like docks that act as buffers against beach-deteriorating waves, are to be installed between 2014 and 2019.

Despite all this technology, though, Jamaica Bay's brightest new hope may be a bivalve that once lived in the 350 square miles of the estuary: the oyster.

Oysters last thrived in the Hudson-Raritan Estuary in the early 20th century. Describing the bivalve as a "keystone" species that affects other components of its ecosystem, NY/NJ Baykeeper has championed experimental oyster farming. Every animal can filter nitrogen and pollutants from 50 gallons of water daily. They eat oxygen-guzzling phytoplankton that suffocates the bay. In, addition the beds where the oysters live serve as homes for small marine organisms and the fish that feed on them.

Their decline both signifies and intensifies the bay's ailments. Chester Zarnoch, associate professor of natural sciences at Baruch College, and his colleague Tim Hoellein have received funds from the National Science Foundation to study the growth and survival of oysters in the estuary and to determine their potential in restoring it.

Zarnoch says that there has been tremendous growth and evidence of spawning where the bivalves have been re-introduced.

While that is good news, the oysters may not solve the nitrogen problem in the long term. Research has brought to light that oysters, while they do filter nitrogen, they simply store the substance in their bodies and release it back into the environment upon their death. Scientists now hope to harness the oyster's digestive cycle to remove the nitrogen from the water.

"In Chesapeake Bay and Long Island Sound, you can remove nitrogen from the water by removing oysters and consuming them," said Zarnoch. "But we can't consume them from Jamaica Bay because of the amount of bacteria present."

Oyster gardening is still in the beginnings stages of a two-year experiment that will determine whether they will benefit the bay's condition. The next several years will be critical to see if the oysters can once again thrive in the estuary as part of a recovering environment and if the marshes can once again shelter and nourish an authentic mix of native New Yorkers.