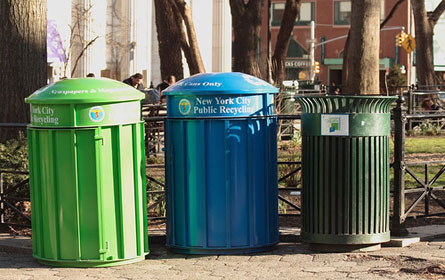 With many city residents still dumping all their trash in the garbage can, the City Council yesterday passed 11 bills to spur recycling in the city, including a measure that would let New Yorkers put all rigid plastic containers -- even yogurt cups -- in the blue bin.

In another action aimed at improving the environment, the council passed a bill to reduce pollution from the burning of heating oil in the city. And during its first meeting at 51 Chambers Street, where it will convene as City Hall undergoes repairs, the council also gave its final OK to two long-debated development projects -- one at the old Domino refinery on the Brooklyn waterfront and the other in Flushing.

In the 20 years since it passed its first residential recycling bill, New York has failed to meet its own goals and fallen behind other cities in the country, according to most experts. While the city had hoped to recycle 35 percent of its garbage by 2007, figures released earlier this year found only 25 percent of trash was being recycled citywide.

All the garbage not being recycled, said, has to go to far-away landfills, forcing the city to pay shipping and dumping fees. This, said Letitia James, chair of the council sanitation committee, "puts an unsustainable burden on our city's economy."

Boosting recycling on the other hand, James said, will mean "more work for local vendors and more money saved in city coffers."

Of the bills only the one on yard waste -- Intro 157 -- encountered any opposition. The measure would require homeowners to separate and bundle grass clippings and the like for collection and eventual composting at city housing authority facilities.

Several members argued this would place a burden on homeowners who, they said, already are suffering from higher taxes and water bills and reduced city services.

"The city of Ne York is taking a perfectly biodegradable product -- grass clippings -- and suggesting you can't put it out with your garbage," said Republican Daniel Halloran of Queens. "It's another jab at the outer boroughs and homeowners."

Responding, Councilmember Erik Martin Dilan said the bill would not prevent anyone form cutting their lawn but simply require them to put the clippings out for collection at an appropriate time."

Some aspects of the package intend to make recycling more convenient, such as Intro 148-A, which would expand plastic recycling. Currently the city accepts only some types of plastic for recycling, taking milk jugs, for example, but not yogurt containers. This bill would require the sanitation department to recycle all rigid containers following the opening a recycling facility in Brooklyn now slated to begin operations in 2012.

"The biggest thing that's holding New Yorkers back from recycling is confusion, Quinn said, noting that people now have to search for a small number on a plastic container and then check to see if the type of plastic is indeed fit for recycling.

In further efforts to make recycling easier, Intro 158 would increase the number of recycling bins in public spaces from the current 300 to 700 within the next 10 years and require the sanitation department to start a recycling and reuse program for textiles as well as recycling programs for batteries and tires. The bills would also educate the public about recycling by creating and distributing a guide on the residential program and requires the sanitation department to hold workshops on recycling for owners and employees of apartment buildings that have received fines for repeated violations of the law (Intro 147A)

Other provision address hazardous waste. Under Intro 162 the Department of Sanitation would have to hold at least one hazard waste collection event in each borough every year, while Intro 142-A calls for a voluntary program in which manufacturers and retailers would take back unused paint, which, according to the council, accounts for about half the city's total of hazardous household waste.

The package also looks at expanding recycling beyond the home. Intro 165-A seeks to boost it at public and private schools by designating a recycling coordinator in schools and providing recycling bins, while Intro 156-A targets city agencies.

And the package calls for a lot more studies including ones on composting of food waste (Intro 171-A) and commercial recycling (Intro 141-A).

All the measures except the one dealing with yard waste passed by a vote of 45 to 0.

With heating oil accounting for a large portion of New York's soot pollution -- more than all the vehicles on city streets -- the council unanimously approved a measure it says will clean the air and in the process reduce the city's high rate of asthma.

The bill, Intro 194-A, sponsored by Councilmember James Gennaro, would reduce the maximum level of sulfur allowed in No. 4 heating oil, one of the dirtiest grades, by half. It also quires all heating oil burned in the city after Oct. 1, 2012 contain about 2 percent biodiesel. That biodiesel, said Gennaro, comes "from what I like to call New York's crop, which is restaurant grease."

The 2 percent of regular heating oil saved, he said, would be equivalent to a seven-foot-deep lake covering City Hall Park.

After six years of debate and negotiations, the council unanimously approved an 11-acre housing and retail project on the site of the old Domino sugar refinery in Brooklyn. The current plan calls for 2,200 apartments there, with 660 designated as affordable. The project also includes community space that would allow for the building of a new elementary school if necessary.

The plan, which has had the enthusiastic backing of Bloomberg administration, was altered somewhat in response to concerns by Stephen Levin, the area's council member who initially opposed the plan on the grounds that it was too big and would not include enough affordable homes. Following negotiations, the developer, Community Preservation Corp. reduced the height of the buildings, but did not add more moderately priced apartments.

The council's vote to approve Flushing Commons also ends an extensive negotiation. This project would create residential, retail commercial and community space -- along with more parking spaces -- on the site of a municipal parking lot Flushing. Of the 760 apartments, about 140 will be affordable.

Small-business owners in the area, many of whom are Korean, feared they would not survive construction and worried they would be pushed aside by Chinese-owned businesses now located elsewhere in the bustling Flushing area.

To try to allay the small-business owners concerns, earlier this week, the Bloomberg administration announced it would provide $6 million to local merchants. The businesses owners originally were slated for $2.25 million in aid.

The money would go for loan guarantees, signs and various businesses services with half of it aimed at alleviating parking problems in the area during construction.

The project was approved 43 to 2, with Councilmembers Gale Brewer and Brad Lander voting no.