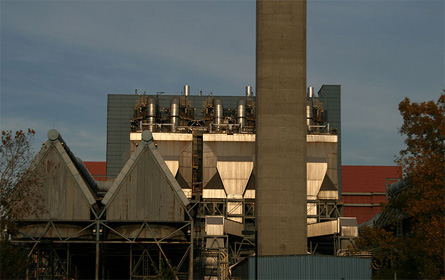 Photo (cc) Kai Schreiber
This waste-to-energy plant in Newark was built almost 20 years ago and continues to burn garbage, including some of New York City's refuse.

The Bloomberg administration is once again talking trash.

Five years after the City Council approved a new solid waste management plan and a decade after the closure of the Fresh Kills landfill on Staten Island, the Bloomberg administration is seriously considering the development of waste-to-energy facilities in the five boroughs, officials said Tuesday. Waste-to-energy -- commonly thought of as the process of heating or burning trash and converting it to energy -- was mulled over earlier in Bloomberg's tenure. Mayor Ed Koch also considered the technology, but community opposition killed his proposal.

Now waste-to-energy is back on the administration's radar, and the Department of Sanitation will release a "request for information" to gauge interest from industry experts in the oft-controversial technology.

Officials see waste-to-energy as a potential solution to the skyrocketing cost of exporting city trash to out-of-state landfills -- a price tag that has risen by 62 percent per ton over the last decade. Already a majority of refuse in Manhattan is trucked to an incinerator in Newark and burned.

"The monetary costs of long distance transportation and disposal are quite high," said David Bragdon, the city's director of long term planning and sustainability. "When you look at the landfill and transportation market, the city is spending more and more money every year. I think we will, as we did in the earlier plan, call for an examination of waste-to-energy conversions."

The toughest challenge for the city will be siting such facilities. The equal distribution of infrastructure throughout the five boroughs has been a sensitive issue from Williamsburg to Hunts Point. Already, advocates say, developers have targeted neighborhoods, like Sunset Park, to hone in on potential sites for waste-to-energy facilities.

"I feel a little troubled by the fact that whenever these proposals are made our communities are targeted," said Elizabeth Yeampierre, the executive director of the United Puerto Rican Association of Sunset Park.

Bragdon, however, said no particular site is under consideration.

"Where [these facilities] might occur is a wide open question," Bragdon told Gotham Gazette.

The preliminary discussion has split the city's environmental community. Some fear facilities could land in neighborhoods already overburdened with waste transfer stations. The rest applaud the move. To ensure the city has a sustainable sanitation plan for the future, supporters argue it must deal with some of its solid waste within the five boroughs.

Reaching its height in popularity during the 1970s and a staple in many European cities, waste-to-energy in its most basic form involves an incinerator burning trash and using turbines to create usable electricity. In recent years, the definition has expanded to other renewable technologies, like anaerobic digestion, which takes methane out of decomposing refuse, or thermal technologies, which heats refuse at extremely high temperatures to create energy.

The move to develop such facilities here would be a drastic change from how the city deals with refuse now.

In the 10 years since the closure of the Fresh Kills, the city has spent the majority of its time trucking trash on diesel-spewing trucks to out-of-state landfills in Pennsylvania, South Carolina and Virginia.

In 2006, the City Council approved a new solid waste management plan that moved trash onto barges and railroads -- an attempt to reduce carbon emissions. The city also approved several new waste transfer stations, including two in Manhattan, to distribute the trash burden throughout the five boroughs.

On Earth Day in 2010, Mayor Michael Bloomberg announced the city would once again tackle solid waste management and incorporate it into his environmental agenda. The announcement, advocates said, offered an opportunity to revisit the city's reliance on out-of-state landfills.

"It's time the city take a look from a cost perspective and from an environmental perspective at solid waste disposal," said Marcia Bystryn, the executive director of the New York League of Conservation Voters.

The mayor plans to release a retooled PlaNYC 2030 on Earth Day next month. Advocates and officials said it would deal with solid waste management.

Should the administration move forward with waste-to-energy facilities, it's unclear what technology it will select.

"A lot of people when they hear waste-to-energy, what they assume is incinerator. That is a misconception," said Rohit Aggarwala, the former head of the city's sustainability agenda who now serves as a special advisor to the C40 climate leadership group. The group is chaired by Bloomberg. "I'm almost certain that there are waste to energy technologies that would make sense in New York," he said.

Environmental advocates have expressed interest in anaerobic digestion. The city already extracts methane from Fresh Kills. A study conducted for the New York City Economic Development Corp. last summer found a digestion facility in Hunts Point, one of the largest food markets in the country, could be a rich resource for the city -- if it wanted to make the investment.

Experts at Columbia University's Earth Institute say traditional waste-to-energy plants, which incinerate trash, have gotten cleaner. The U.S. Environmental Protection Agency established guidelines to restrict emissions from these plants in the 1980s. There are 87 waste-to-energy plants in the country, several of which are on Long Island, said Nickolas Themelis, a professor at Columbia.

Opponents, however, question whether these types of facilities jibe with the administration's overall goal: to make the city more sustainable. Some say the administration should focus on increasing the city's dismal recycling rate instead.

"What is the incentive for the Department of Sanitation?" asked Eddie Bautista, executive director of the New York City Environmental Justice Alliance. "What's the incentive to recycle and reduce waste [when] if we feed the beast, we'll actually get energy out of it?"