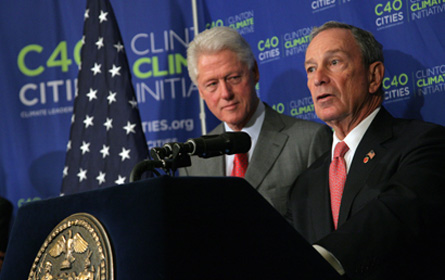 Photo by Edward Ree
At a joint announcement on climate change last week, former President Bill Clinton and Mayor Michael Bloomberg both boasted of how green they had become.

In an elaborately decorated parlor in Gracie Mansion, Mayor Michael Bloomberg and former President Bill Clinton last week each ticked off how he had personally become green.

Bloomberg painted the roof of his Upper East Side townhouse white.

They both pushed for sustainable building.

Bloomberg plans to encourage all New Yorkers to adopt those personal practices. And he's doing it through his environmental agenda: PlaNYC 2030. In December 2006, PlaNYC set out more than 120 initiatives, programs and goals to reduce carbon emissions by more than 30 percent over the next two decades and prepare the city for a population influx of 1 million people. It proposed regional parks, bike lanes, stormwater infrastructure, affordable housing and a green building code. According to Bloomberg's estimate, the city has already kicked off 97 percent of these initiatives.

"The vast bulk of these things we actually are doing, and they are making a difference," said Bloomberg.

Many advocates say the vast majority of the plan has been successful, but not all of it.

Since the plan's launch, the administration has been hit with several major defeats (most notably, congestion pricing), while some adopted proposals (ahem, bike lanes) currently face renewed opposition.

This week, Bloomberg is expected to release a retooled plan, announce new initiatives and incorporate the city's solid waste management strategy into his sustainability agenda. As the city plans for PlaNYC 2.0, officials and advocates question whether Bloomberg can accomplish all of the goals of the original plan in the face of a staggering economy and third termitis.

First came congestion pricing -- the mayor's plan to charge drivers to enter Manhattan during the workweek.

The linchpin of the entire environmental agenda, the pricing plan failed to gain traction in Albany thanks to fierce opposition from legislators in the outer boroughs.

That defeat was followed by a series of court decisions striking down another PlaNYC proposal: the creation of an all hybrid-taxi fleet.

Then came the Great Recession and 10 rounds of budget cuts. Now, thanks to the economy, some programs have been abandoned altogether.

"We had our wins and our losses," said Rohit Aggarwala, the former head of the mayor's Office of Long-term Planning and Sustainability, who left the Bloomberg administration last year. "The biggest achievement that I'm most proud of is the green buildings package," Aggarwala said referring to legislation to reduce carbon emissions from buildings. 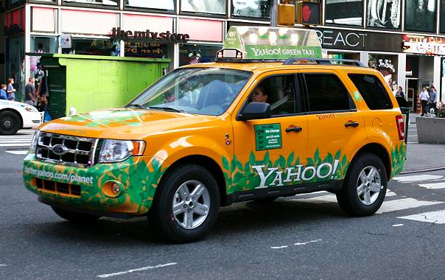 The administration has been thwarted in its efforts to convert to hybrid taxi cabs.

But, he added, "Congestion pricing was obviously a tragic loss. The hybrid taxis is kind of a mixed bag."

Some would call "mixed" generous.

The administration is set to select a new taxi model this month -- none of the cars under consideration are hybrids.

Beyond taxis, the city planned to open 43 sports fields across the city to their communities. That proposal has been abandoned, according to the latest PlaNYC status report.

By 2015, according to PlaNYC, the city would redevelop at least one underutilized major park in every borough. Construction was supposed to start on all eight by the end of 2010. Half -- Fort Washington Park, Highland Park, High Bridge and Soundview Park -- have yet to see a shovel in the ground.

The plan promised every New Yorker would live within walking distance of a park. Some advocates question whether that will ever happen.

They have none of that, she said.

The city was supposed to complete 640 greenstreets, or thoroughfares with small islands with green space, by 2015. That number has been halved, according to a PlaNYC progress report. The administration originally committed to installing nighttime lights on 25 fields. That has been decreased to 19.

The plan called for encouraging home ownership and affordable housing. But the administration's preliminary budget has eliminated city funding for the Center for New York City Neighborhoods, which provides counseling for those at risk of foreclosure.

For its part, administration officials are quick to deflect blame and point fingers -- sometimes at Wall Street and the economy, other times at Washington or Albany.

"For those things that are within the city government's unilateral control, the transportation initiatives have been successful," said David Bragdon, the new head of the city's sustainability office. "Where the transportation objectives haven't been met, it's largely a function of state and or federal inaction."

Bragdon, who took over the mayor's sustainability office last year, said the administration is committed to seeing the plan through. Park construction is not eliminated, only delayed. As part of the city's budget cutting measures, the administration is stretching out projects over several more years.

In light of billion-dollar deficits, some advocates sympathized with Bloomberg, who has to weigh spending city funds on the creation of open space with keeping cops on the street.

"They've accomplished a lot already, and while it's frustrating that the progress has had to slow, it's still underway," said Alyson Beha, director of research, planning and programs at New Yorkers for Parks. "They are doing a fantastic job given the financial climate."

Just last week, the mayor lauded the 2-year old pedestrian plaza in Times Square for bringing down nitrogen dioxide and nitrogen oxide levels in the area (PlaNYC called for 10 to 15 public plazas across the city). 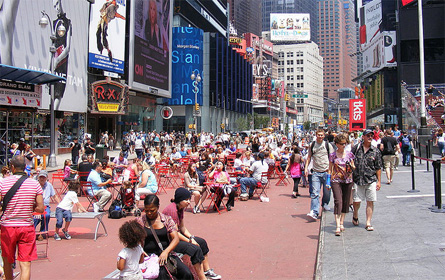 Photo by Sean Marshall
Many view changes to the city's streetscape, such as the Times Square pedestrian mall, as key successes of the Bloomberg environmental plan.

While major park construction has been delayed, the administration has been successful at opening school playgrounds to the public. As of April, 177 have been opened and 34 are currently under construction, according to a Bloomberg spokesperson.

Last month, Bloomberg and Council Speaker Christine Quinn announced the launch of East River ferry service between Brooklyn, Manhattan and Queens -- after much delay -- and committed $3.3. billion to the city's waterfronts.

Back on land, the administration has successfully launched the nation's first ever Office of Environmental Remediation -- the only city run brownfield cleanup program. The office aims to attract developers by providing start-up capital to clean up contaminated land, which does not qualify for state or federal programs. So far, said Daniel Walsh, the head of the office, eight developers have signed on and the city has approved $800,000 in grants.

"For us, it's a very good story," Walsh told the Gotham Gazette. "The economy has not stopped us from building programs and getting them in place."

Despite earlier criticism, most advocates champion new laws approved in 2009 to require buildings get energy audits. In an original version, the proposal would have forced building owners to complete the audit's recommendations. In a compromise with the real estate industry, that provision was scratched.

Nonetheless, advocates say the legislation would still be extremely effective at reducing pollution from buildings -- which are responsible for 80 percent of all the city's carbon emissions.

"From our members' perspective, brownfields, the green infrastructure, stormwater management plan, the greater greener buildings plans ... every one of those have had a disproportionately positive effect for environmental justice communities," said Eddie Bautista, a former member of the Bloomberg administration who now heads the Environmental Justice Alliance. "Had PlaNYC not prioritized these type of programs cumulatively, we would be talking about dirtier air, more un-remediated soil, more CO2 discharges."

But Bautista added: "The jury is out on moving forward in a budget challenged, in a deficit era."

The next version of PlaNYC, which will be unveiled Thursday, is already getting mixed reviews.

"While on its face it looks like this great effort to address climate, it doesn't really address the environmental health needs of communities that really deserve it," said Yeampierre of UPROSE, who says projects in Manhattan are higher priorities than those in outer borough, poorer neighborhoods. "The more we learn about what's being proposed, the more we're concerned."

Some of the criticism from advocates like Yeampierre stems from the administration's renewed exploration of waste-to-energy -- otherwise known as the process of burning trash to create electricity. Solid waste management will be included in the plan for the first time, and some advocates fear communities already inundated with the city's garbage burden will face the prospect of new facilities.

Other environmentalists, like those at the New York League of Conservation Voters, are encouraging the administration to consider waste-to-energy facilities. Too much of the city's trash is taken to out of state landfills, said Marcia Bystryn, the group's executive director, at an extremely high financial and environmental cost.

Stakeholders do not anticipate a sea change this week considering the city's budget crunch. Advocates say it's a good sign the administration is willing to revisit the plan and consider new technologies that have emerged over the last five years. But they are far from claiming victory.

"The hard part of conveying this story is you can acknowledge the progress that has been made and still worry about the serious challenges yet to be addressed," said Eric Goldstein of the Natural Resources Defense Council. "Celebrating now would be premature."