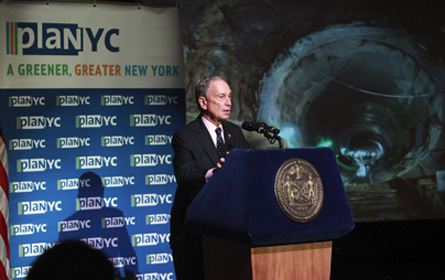 Four years ago Mayor Michael Bloomberg stood in the cavernous ocean life room at the Museum of Natural History to set forth a sweeping plan to make New York City sustainable by the year 2030.

Yesterday he went to a less overwhelming venue -- the gatehouse that houses the Harlem Stage on Convent Avenue -- to laud his achievements and set forth a new round of less sweeping ideas to clean up the city and make it run more efficiently. The 132 proposals -- some new, some not, many fairly vague -- encompass a range of environmental concerns from air quality to brownfields to a green infrastructure to reduce the burden on the sewer system.

While the mayor's 2007 blueprint included dozens of measures, attention quickly focused on one: his effort to charge people to drive into Manhattan during the business week. (For a review of the 2007 plan's successes and failues, go here.) In his speech yesterday, Bloomberg largely eschewed such controversy, focusing on proposals to phase out use of highly polluting heating oil, place solar collectors on unused landfill space and help property owners finance energy efficiency projects.

Notably, in his speech Bloomberg did not mention possible construction of plants that would produce energy from garbage. The written plan released yesterday does call for pilot waste to energy projects but does not set out many specifics.

The 198-page plan touches on some other controversial items. It calls for pricing mechanisms to discourage auto use, for example, comes out strongly against hydraulic fracturing to extract natural gas in the city's watershed and seeks "continued expansion of the bike network."

Having a proposal in a plan does not, of course, guarantee it will come to fruition. But environmentalists, many of whom attended the speech, expressed almost unanimous praise for the mayor's latest proposal.

"This is great," said City Councilmember James Gennaro, chair of the environment committee, who hailed the opportunity "to all get together and get reenergized and committed to all this great work."

"We really have a mayor who has set the bar on sustainability. We're pleased he is continuing to raise that bar and that it’s part of his political agenda," said Marcia Bystryn, executive director of the of the New York League of Conservation Voters.

Two of Bloomberg's key proposals, which took up much of his speech, involve making the city's buildings cleaner and more energy efficient. Unlike other cities in the country, Bloomberg said 80 percent of greenhouse gases and other air pollution here comes from heating, cooling and powering buildings -- not from cars and trucks.

To chop away at that, Bloomberg called for phasing out use of highly polluting Grade 6 heating oil by 2015 and of grade 4 by 2030. The city itself will stop using the Grade 6 oil at some 200 public schools.

Together, Bloomberg said, the few thousand buildings that burn this oil "produce more pollution than all the cars and trucks in New York City combined." Doing away with it, then, he said, will do more to reduce pollution than congestion pricing would have done and could save 1,500 lives a year.

A number of environmental groups have been urging similar moves.

"The importance of that cannot be overestimated," said Gennaro, whose proposed legislation passed by City Council to clean up heating oil.

Bloomberg also said he would create the New York City Energy Efficiency Corp., funded with some $37 million in federal money, to provide financing and information to property owners to encourage them to undertake energy efficiency and other environmental improvements.

The plan calls for the city to take steps toward producing energy as well as using it by devoting space to solar collectors at the onetime landfills at Fresh Kills and Fountain Avenue.

Taking Out the Garbage

Unlike the first plan this iteration of PlaNYC does discuss solid waste, but the mayor did not mention the topic in his speech.

The written plan does, as Gotham Gazette reported last month, call for pilot projects to test the feasibility of waste to energy plants in New York City. David Bragdon, head of Office of Long-Term Planning and Sustainability, said there was not yet any timetable for doing this. Companies submitting proposals for pilot projects, Bragdon said, would have to include the technologies to be used as well as the thorny issue of siting any such plants.

"Any individual proposal would need to be evaluated in terms of health impacts, environmental impacts," he said. Overall, he said, "the overarching goal is to reduce the amount we're sending to landfills."

While she was pleased to see solid waste included in the plan, Bystryn said her group will want to see follow-up implementing fuel producing measure. The league, she said, supports waste to energy as a mean to reduce the costs and environmental impact of sending garbage to faraway landfills. "We will be urging [the administration] to get more explicit," she said.

Eddie Bautista, executive director of the NYC Environmental Justice Alliance, though, sees problems with having the plants included in the plan at all.

"It’s like a symphony when you've got really good music and then there's this sour note or flat note and everyone cringes," he said.

In particular Bautista cited concerns about pollution from the plants, disposing of residual materials and siting of the facilities in communities that already have been burdened with waste disposal and other polluting facilities.

Given his general support for the PlaNYC -- what’s not to love," he said, "most of it is mom and apple pie" -- Bautista said he hopes the waste to energy plan will be a non-starter. "They say they're going to look at it. That doesn’t mean they’re going to do it," he said.

Elizabeth Yeampierre, executive director of UPROSE, a community group in Sunset Park, agreed. "I hope the fact that [Bloomberg] didn’t talk about it means it’s not a priority," she said.

In addition to waste to energy, the plan calls for increasing recycling. Bragdon said the city would look make recycling more accessible for households and would also seek to boost commercial recycling rates, particularly for organic waste and paper.

Interestingly the speech came on the same day the mayor and the City Council reached a tentative agreement to restore funding for four marine transfer stations called for in the city's Solid Waste Management Plan. These were key to the effort, supported by environmentalists and community advocates, to switch from transporting garbage by truck through city streets to placing it on barges.

Postponing the stations "would have been really, really harmful," said Yeampierre. She praised the mayor's solid waste program as "a huge departure form other administrations and a huge step toward equity."

Yeampierre said she hopes that principal of fairness could be extended to other environmental issues. "I would like to see this attention to communities that have suffered the brunt of the burden be a priority," she said.

By all accounts the recession and accompanying budget woes delayed if not derailed parts of the 2007 plan. Reviewing the proposal, particularly with respect to parks, Alyson Beha, director of research, planning and programs for New Yorkers for Parks said, "It's something of a relief to see as many new initiatives as there are given the fiscal climate."

The plan, though, does not spell out how the parks department will maintain all this new parkland.

In the transportation section, the plan calls for seeking "funding to maintain and improve our mass transit network."

In his speech, Bloomberg harked back to what many view as the key defeat from the 2007 plan -- the failure to passcongestion pricing. Despite that defeat, Bloomberg credited the proposal with raising "critical issues about reducing traffic and reducing mass transit." So this year's plan calls for "pilot technology and pricing based mechanisms" to address those issues -- without being specific about what those mechanisms might be.

For the mayor coming off a rough few months, the speech offered an opportunity to bask in some praise and to laud his work. The glossy 198-page book, the slide presentation, a panel discussion and free water bottles filled with eau de tap all gave the presentation on the day before Earth Day the trapping of a corporate public relations event.

In his speech, Bloomberg patted himself -- and others -- on the back. Ninety-seven percent of the initiatives in the first PlanNYC were launched in the first year, Bloomberg said, rattling off accomplishments: a greener taxi fleet, a half million trees planted, faster buses, increased life expectancy. ("If you want to live longer, move to New York," Bloomberg said.) He lauded New York for being at the forefront of urban environmental issues, and others lauded him for making that happen.

What will happen to the plan then remains anyone's guess. Long-term planning poses a challenge in a place where officials serve for the short term.

Referring specifically to parks -- though it could apply to other parts of the plan as well -- Beha said, "All of these initiative are being funded with mayor's discretionary funds. Those that don't get funded in the next two years, there is no guarantee that they're going to get funded."