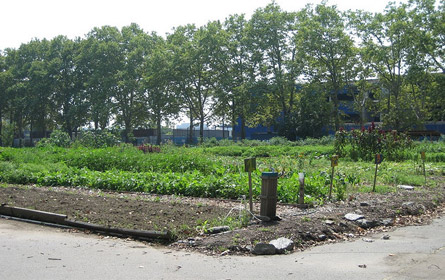 Photo by http://www.flickr.com/photos/tdb/ Tiffany B
Red Hook's Added Valaue Farm provides work and training for area teenagers while growing healthy food in a community where that can be hard to come by.

In 2007, when New York City released PlaNYC 2030, "locavore" had been named the word of the year and Michael Pollan's Omnivore's Dilemma was a bestseller. Despite that, PlaNYC was virtually silent on the role that food plays in our city's sustainability.

In response, the four-year update to PlaNYC, releasedon the day before Earth Day this year acknowledged for the first time that sustainable food systems are critical to the city's well-being and included food as a cross-cutting issue. The update included a wide variety of food initiatives, including:

Although Manhattan Borough President Scott Stringer, City Council Speaker Christine Quinn and various advocacy groups already proposed most of the initiatives in PlaNYC, their inclusion in the mayor's sustainability document signals his intention to carry them out. And that's an important step forward. However, several limitations of PlaNYC raise questions about the long-term impact these disparate policies will have on the city's food system.

PlaNYC does not articulate a vision of a sustainable food system and does not explain how the discrete pieces fit together. A comprehensive food plan, on the other hand, would consider questions such as to what extent urban agriculture contributes to neighborhood sustainability, food security and environmental quality. It would look at how much space we should devote to it, and what additional resources are needed to support urban food production. What mix of farmers markets, CSAs, green bodegas, green carts, community gardens and supermarkets provides ample access to healthy food, and how can the city help ensure that each neighborhood has the right mix? Should New York City change how it buys food for schools and social service programs in order to support regional farmers, or should cost and minimal nutritional quality be the sole criteria?

Greener, Greater, Fairer by Dan Steinberg: In PlaNYC, the mayor missed a chance to create not only a more environmentally friendly city but a more economically equitable one too.

Shades of Brownby Melissa Checker: Under a city program, developers are cleaning up vacant land and building on it. While the projects improve the environment, some do little to serve other needs in their communities.

Cracks in the Concreteby Anne Schwartz: The Bloomberg administration not only wants a greener New York, it wants a more permeable one. A look at how green infrastructure could cut costs and clean city waterways.

The Missing Public by Alyssa Katz and Eve Baron: PlaNYC offers some outstanding proposals, but unfortunately it didn't involve the public very much in creating them.

PlaNYC claims that food "presents a unique planning challenge" because much of the food infrastructure "is privately owned and shaped by the tastes and decisions of millions of individual consumers." But many other complex urban systems addressed in more detail in PlaNYC include private infrastructure and are influenced by consumer decisions. Individual consumers shape the city's housing, energy, telecommunications and transportation infrastructures, all of which include public and private facilities.

In fact, the city controls an extensive food infrastructure. It owns and leases the terminal food markets, regulates and is a major land owner in the rural Catskill-Delaware watershed, and owns the land many urban gardens lease and farmers markets use. Beyond that, the city controls the infrastructure that prepares and serves food to our children and the residential waste disposal system that manages organic matter. And, as one of the largest institutional food buyers in the nation, the city could use the power of its purse to influence large institutional food producers and processors.

Despite this, the city has, until this point, devoted few resources to analyzing the food system comprehensively and so lacks information about it. (It is unfortunate that such research was not conducted between the initial PlaNYC and the update.) As a result, well-intentioned initiatives have been advanced in the absence of basic information about the food system, like the provenance of the food purchased by the city, how much food moves into and through the city, the availability of grocery stores, where people shop for their food, or the location of vacant city-owned land that might be gardened or farmed. The lack of understanding has made it difficult to design efficient, comprehensive, complementary policies as well as to prioritize new initiatives or evaluate their impact. Legislation pending in the City Council (Intro 615) would require gathering these basic metrics about food system, but the mayor's representatives have raised concerns in hearings about their capacity to do so.

Some 45 city agencies purchase food, support food growing, produce compost, teach about food, bring people to supermarkets, make decisions about land use, or regulate how food is grown, processed, distributed and sold This would seem to indicate the sustainability plan could have a major effect on our food system. But, because PlaNYC lacks the force of law, there is no assurance that any initiatives it mentions will be reflected in other agency plans, or that agencies will focus on the food system.

This has real consequences. For example, in the recently released Sustainable Stormwater Management Plan, the Department of Environmental Protection did not consider the role of urban farms in absorbing stormwater, while enhanced tree pits and porous pavement were featured. The Department of Sanitation chose to suspend its leaf and yard waste composting program a few years ago even though urban farmers have been clamoring for compost. The Office of Environmental Coordinationdoes not require developers preparing environmental impact assessments to consider the effects of their projects on the availability of fresh food, although it does require them to assess many other impacts, from open space to traffic. City procurement agencies have never been concerned about buying regionally-produced food, so they have not yet developed systems to track where the food served by the city comes from.

One of the goals of PlaNYC is to accommodate a million new residents in adequate housing located near transit, with functioning infrastructure and sufficient open space. Achieving this goal requires not only higher density development in locations with public transportation within New York City, but also fostering a sustainable foodshed that allows the peri-urban areas surrounding the city to remain relatively undeveloped.

Some cities, like San Francisco, have looked beyond the city boundaries in seeking to obtain municipal food from the region's foodshed. PlaNYC, however, suggests that such an effort would not be within the city’s purview, ignoring the connection between our city and the surrounding foodshed, and how New York City can influence the environmental impacts associated with food production outside of our five boroughs through the power of the public purse.

Overall, the Department of Education serves some 860,000 meals a day, while other New York City agencies serve 225 million meals and snacks annually. Adjusting procurement to give preference to regionally grown food for these millions of meals would channel a portion of what we spend on food to the region's farmers. A bill pending in the City Council (Int. No. 452) would require the city to try to purchase food grown or prepared in New York State. The administration has testified that it would be too difficult to do so for most food contracts.

PlaNYC offers no estimate on how much it would cost to bring the initiatives mentioned in the plan to fruition. For example, increasing access to fresh fruits and vegetables through farmers markets, CSAs and upgraded bodegas requires infrastructure, from wireless Electronic Benefit Transfer readers to refrigerators. Increasing urban farming requires more land, technical assistance, and clean compost. Yet city agencies like health, parks and sanitation are already stretched thin, while a single food policy coordinator, not a fully staffed food department, bears the responsibility for coordinating all these activities.

Only two of PlaNYC’s 198 pages are actually devoted to food. In contrast, just a week prior to the PlaNYC update, Minneapolis issued a comprehensive plan addressing only urban agriculture. Chicago's regional plan, Go To 2040, has an entire chapter devoted to sustainable local food. The New York City Council's own FoodWorks report is a comprehensive 90-page policy plan.

Now that PlaNYC officially acknowledges food to be essential to a "greener, greater New York," food advocates should press for a comprehensive food plan and changes to local law that make sustainable food practices a permanent part of city government.

Nevin Cohen is assistant professor of environmental studies at The New School.