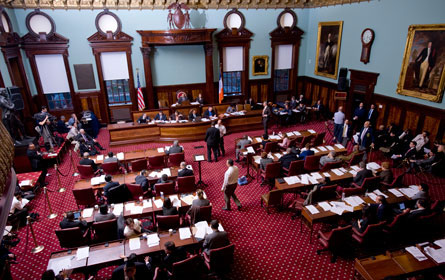 In what advocates say is the most sweeping legislation in the country to tackle PCB-contamination problems, two City Council bills unanimously passed yesterday will inform parents and school employees of contamination in schools and add transparency to the clean-up process.

PCB, or polychlorinated biphenyl, is a chemical that was widely used as a coolant and dielectric before it was banned it in 1979 for its toxicity.

The first bill 563 requires the Department of Education to notify parents and employees of PCB testing results or if the school uses T12 fluorescents, an outdated type of lamp that often leaks PCB. A second bill 566 asks for detailed reports from the DOE on their progress and plan eradicating PCB from schools.

The effort was spearheaded by Councilmen Vincent Ignizio and Stephen Levin. Ignizio said he was inspired to act after he learned of a T12 fluorescent that was leaking PCB onto a carpet where grade-school children sat. "That's where this started," he said.

Nearly 800 city schools — built between the 1950s and late 1970s — are likely contaminated. PCB can hurt cognitive development in children, studies show. It also has been linked to cancer and a variety of other illnesses. Exposure to the chemical is particularly dangerous to young girls, who carry the chemicals in their bodies for years and pass them on to their offspring, as well as pregnant women, whose unborn children can be harmed by the exposure.

"Parents deserve to know what type of environment their children are learning in and school employees should be able to walk into their buildings with knowledge, not fear," Council Speaker Christine Quinn.

The First Signs of PCBs

While the sources of PCB were removed from the three schools, other schools built during the so-called PCB era (the 1950s to 1979) have not been officially tested. The EPA advised an expedited removal of the T12 lights and later recommended an immediate fix. Then Deputy Mayor for Education Dennis Walcott (who is now the city’s school chancellor) asked the EPA to reconsider their recommendations, noting that the “theoretical risk of health impacts” was too low to justify what they estimate to be a $1 billion dollar clean-up. The EPA rejected this, and began testing schools independently, finding 93 percent of tested classrooms to have contamination.

Presently, a DOE spokesman explained in an email, T12 lighting fixtures are inspected for leaks and if found, they are immediately removed and notice is given to the community of the potential PCB risk and the plan for removing the source.

“As part of our comprehensive plan to replace all lighting fixtures in more than 700 school buildings within 10 years, we notify parents and the school communities where we have observed leaks and about the progress in removing the fixtures,” a statement read. “We are committed to updating this material on the DOE website and keeping parents and school communities informed about this issue.”

Health advocates and DOE critics say the ten-year plan isn’t fast enough. "We recognize it can't happen overnight, but you can't put a price tag on the health of our children,” New York Lawyers For the Public Interest's Christina Giorgio said. She and other members of the “Right to Know” Coalition lobbying against PCB contamination are asking the city to take care of the issue within 2 years. NYLPI has worked for years to pressure the DOE to rid schools of PCB; Giorgio is an attorney on their Environmental Justice team. They currently have a suit pending in federal court, where they hope to have a court order to remove the T12 lights more quickly.

The Right to Know

Michelle Chapman's ten-year-old daughter has attended two schools with the T12 fluorescent lights. During the school year, Chapman says her daughter has terrible headaches and fatigue. In the summer, her daughter's symptoms abate. Chapman believes that the exposure to PCBs is why her daughter is sick; she has scheduled a CAT scan and blood tests to confirm.

She hopes that the Council bills will inform and motivate parents to advocate for and expedite the clean-up of contaminated schools. "When they realize [the health risks] they're going to be mad as hell," she said.

“When you have a child as young as Kindergarten they are at the most critical time in their life to determine how healthy and how intelligent they will be.” Giorgio said. “This impacts intelligence, this impacts every system of the body.”

Quinn said that the bills will inform and empower parents and employees so that they are able to advocate for themselves.

"If you find out that your child is being exposed to highly toxic chemicals, you’re going to do something about it, you’re going to demand action," said Giorgio. "We feel that this empowers parents to demand the next step which is to remove these lights â€“ not in ten years â€“ but actually in an expedited time frame of two years,” Giorgio said.

She notes these bills are, "Important first steps and important first victories," towards eradicating PCB, but that there is "more that needs to be done about it. These lights need to be removed and they need to me removed immediately."

In addition to the PCB bills, the City Council also voted to require landlords to update expired Carbon Monoxide detectors with new ones that emit a beep when they are no longer functional, something the current legislation does not mandate.