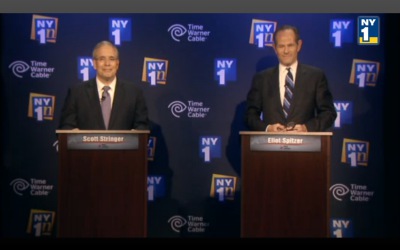 NEW YORK — Thirty or so New Yorkers were cheering for comptroller candidate Scott Stringer on Fifth Avenue last night when a platoon of his opponent’s noisy supporters marched in front of them, holding a huge banner that read: SPITZER.

The scene, outside the building where the Democratic comptrollers were set to debate, was apropos of the comptroller race.

For months, outgoing Manhattan Borough President Stringer had an all but assured one-man race for the Democratic nomination for the comptroller's office.

Enter Eliot Spitzer. The self-financed multimillionaire former governor dropped into the race in early July, bum-rushing the Board of Elections with enough signatures to earn a line on the ballot.

At last night's debate — their second in four days — both candidates spent the night fighting over who was better suited to protect the middle class: Spitzer, who won't wait on anybody to get things done; or Stringer, who can get along with other players in leadership.

But the middle class theme was overshadowed by a back-and-forth that was more focused on tearing at each others' records. Often interrupting each other with a "with all due respect" disclaimer, both Stringer and Spitzer seemed more focused on attacks than on distinguishing themselves as the best man to become the fiduciary of the city's $137 billion pension fund.

Here are some of last night's highlights:

Right off the bat, Stringer hit Spitzer on his record, again calling his rival's tenure in Albany a failure.

"I don’t think that it’s right," Stringer said, "that the person who runs for this office should be somebody who has engaged in money laundering — somebody who has used his previous offices and used it in a way that suggests illegal activity, both as attorney general and as governor."

Spitzer, meanwhile, went for a just-as-low blow in questioning Stringer's contribution to the city after years in office, both as an assemblyman and borough president.

"As Mr. Stringer observes, he's been in Albany 12 year, eight years as borough president — 20 years," Spitzer said. "I would ask what mark has he left on public policy? Why is it that he needs to launch a campaign that is one of ad hominem attacks? Because the public doesn't know what, if anything, he's done."

Spitzer also reminded viewers that Stringer had been the sole candidate for comptroller up until his entry. He accused Stringer of being afraid of competition, and overly reliant on "the establishment" — a reliance that makes Stringer less qualified to stand up to it.

"Sometimes you have to be willing to stand up alone," Spitzer said, targeting his answer to Stringer. "And that’s the difference between us — sometimes you need to be independent and have the fortitude, be willing to stand up to the establishment, an establishment that has given you an embrace to the tune of millions of dollars in independent expenditures than to spend on you."

Stringer gave credit to Spitzer for coming up with good policy initiatives, but accused Spitzer of failing to get them implemented on account of his own personal and professional scandals.

"I think the difference is a lot of people don't want recklessness," Stringer responded before running down his list of policy achievements, namely preventing the deportation of immigrants jailed at Rikers Island. "When I put out an issue, I got the issue passed by City Council, I worked with immigration advocates, I worked with Latino elected officials who said we could make a difference here. You didn't work with anybody; you put an idea out for your own political viability."

Spitzer also attacked Stringer for helping get a third term in 2009 for another self-financed, independent-minded candidate — Mayor Michael Bloomberg.

"The reason why we had a third term is that the political establishment, with Scott's support and participation, gave the mayor a third term," Spitzer said.

Stringer, who did support the Council bill to overturn limits, responded that he's never supported term limits on principle. At the same time, Stringer argued, he worked hard to get then Democratic candidate Bill Thompson into City Hall.

“I’ve never supported term limits,” Stringer said, arguing that changes between offices can be chaotic and comparing it to Spitzer’s own early departure from Albany. “I walked the streets with Billy Thompson … You were nowhere to be found.”

There was some common ground in the debate, however, during the debate's quick-paced lightning round.

Neither Spitzer nor Stringer had ever used the CitiBike bicycle sharing program. They admitted to never having tasted the croissant-doughnut concoction, the cronut. They also both support paid sick leave for all New York City residents.

Stringer, shaking his head, responded with an aghast, "no."

Both candidates were also asked if being comptroller would be the most exciting job the candidates would ever have.

Spitzer was less excited to answer the question.

"You know," he said with a smirk after a short pause, "I don't think I can answer that question. It's a very exciting job. I'll leave it at that."