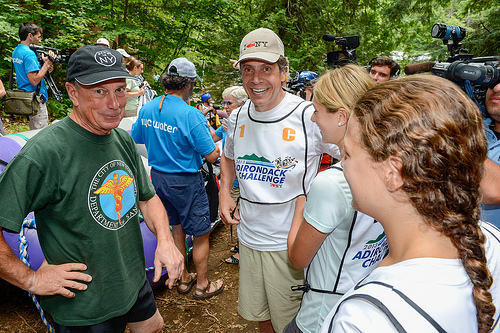 With time running out on Mayor Michael Bloomberg’s lame-duck term, a number of his staffers are looking to his longtime rival Gov. Andrew Cuomo for job security. The last few weeks have seen a steady stream of press releases from Cuomo’s office announcing the hiring of ex-Bloomberg staff.

Cuomo and Bloomberg are notorious political rivals and the tension between the two administrations has been more than apparent whenever they have to work on anything. Perhaps the most obvious example of that was their differing responses to Hurricane Sandy. And who could forget how both camps took a recent Adirondack rafting competition a little too seriously? Now Bloomberg is stuck watching as key staff from his administration walk out the door for Cuomoland.

“This is smart on Cuomo’s part,” said Baruch College professor of political science Doug Muzzio, pointing out that Cuomo is picking up experts in specific fields who are already used to working in government.

Let’s take a look at the recent departure list:

The Cuomo administration announced Sept. 19 that it had Kary Sarlin, Bloomberg’s one-time director of consumer affairs, and Gerrardo Russo, a senior Bloomberg policy advisor. Both now have positions at the Empire State Development Corp. Sarlin will work as executive vice president of public affairs and strategic initiatives while Russo will serve as vice president of communications.

A day later, the Cuomo administration announced that it had hired Andrew Nicklin, director of research and development for the city’s Department of Information Technology and Telecommunications. Nicklin is an open data guru and will head Cuomo’s Open NY open data initiative that has slowly gotten off the ground over the past two years.

Bloomberg might not be outwardly grumpy about losing staff to Cuomo but he does seem sick of hearing critiques of his legacy.

Bloomberg has endured a summer of attacks from his potential replacements as they appeal to a large voter base that wants to see the furthest thing from a “mini” Bloomberg take Gracie Mansion. Yesterday Bloomberg threatened to stop holding press conferences because he was tired of being asked about the race to replace him.

“I don’t find it interesting,” Bloomberg told reporters after declaring he hasn’t listened to “one campaign speech.”