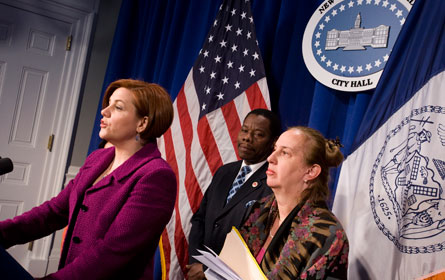 The City Council voted yesterday to pass the most far-reaching and transparent open data legislation in the nation.

The Open Data Bill will require city agencies to release government data to the public online in spreadsheets to speed analysis and trend spotting by the government, outside groups, and citizens alike.

The bill will be fully enacted by 2018. The first wave of data — that which is already available online — will be combined into one web portal within the year. The bill will also create an online forum for citizens to provide feedback on the data released and request more specific data or point out trends.

“What we're striving to do here is making sure we get the total data and get it out there regularly,” Council Speaker Christine Quinn said, adding that the bill will create a “more transparent, effective and I hope, problem-solving focused government.”

As the city aims to adapt its governing policies to the digital age, it is becoming increasingly transparent. The bill has been lauded by good government groups like Citizens United, which noted that its ability to analyze lobbying data will help its work. Gotham Gazette is published by Citizens Union's sister organization the Citizens Union Foundation.

The data that will be disclosed is essentially all the data the city would otherwise release if released via a Freedom of Information Act request. There are exceptions to the rule — like employment and legal data, and the data sets used by only one agency and stored on one computer.

The bill will cost the city around a million dollars, Quinn said, “it’s a lot of data.” But she doesn’t expect additional staff to be added for it. The bill doesn’t include an enforcement mechanism, but Quinn said that with the Mayor’s support, “'we don't expect anything but full compliance.”

As for the city’s game plan to enact the massive data release, the bill’s lead sponsor Gale Brewer said that’s up to the Department of Information Technology and Telecommunications, with input from the Council of course.

The bill is just one part of the city’s push for data-driven innovation and crowd-sourced problem solving. In January 2011, Rachel Sterne was hired as the city’s first Chief Digital Officer. In May, Sterne released the city’s first Digital Roadmap — a 65-page document outlining the city’s digital engagement and plans to connect with its citizens — that highlighted the city’s intention to release more data online.

“We have a very data driven government in New York,” Sterne said late last year at the data-centric NY Strata conference. “We are measurement oriented and we are results oriented.”

Putting that data online, Quinn said, will help the City to more effectively problem solve, noting an early success of this style of problem solving: the MTA’s release of bus data, which allowed third-party developers to create online applications giving real-time arrival and departure estimates of the city’s buses.

With the new data, Quinn hopes the city, public, and third party groups will be able to problem solve and spot trends in traffic accident, illegal conversion and inspections data.

In her Strata speech, Sterne noted that there are already dozens of applications that use city data to create useful apps, like DontEat.at, a Foursquare app that texts consumers who have checked into a restaurant at risk of being closed for health code violations. The release of additional data — like that in the Council bill — often allows third-party developers to better communicate the information. "As long as the right information was getting to citizens, that's all that matters," Sterne said at the NY Strata conference. "It's OK if it's decentralized, as long as the reach is being expanded."