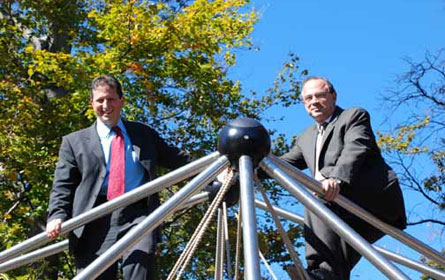 As far as political expos go, this one looked more like a science fair. Delegates packed into a room at the Park Slope Armory with twenty cardboard-mounted ideas of what their community needs.

The proposals ranged from road repair to a giant projector for showing films in the Prospect Park bandshell, to upgrading equipment for a junior high school’s broadcast journalism program. All these plans are on next week’s participatory budget ballot, to be held in four city districts.

The elections represent four months of the volunteer delegates’ work in turning the community’s thousand vague ideas into twenty concrete proposals. Residents will choose their top five and the favorites will become part of the council member’s spending plan, up to a value of $1 million, the amount allocated to capital spending per district.

The project, called participatory budgeting, is now in the final stretch of its first trial run in New York City, the second city in the United States to try the idea after Chicago. Despite many challenges that volunteers faced during the winter, enthusiasm was high at the Park Slope expo where people who knew nothing of local politics last summer spouted civic lore.

“I enjoyed it. I got to learn about how the council members have to interact with all the city agencies and the requirements and rules required to get things done,” said Michael Futtman, who lives in the small part of Boro Park that Lander represents. As part of his presentation, he had a rattling dashboard video of what it’s like to drive down a street in his neighborhood which some of his fellow delegates would like to repair.

Others had graphics showing what can happen, such as the projection of a tall monument to languages and a timer on bus stops which would feed into the buses’ new GPS and tell passengers their wait time.

Still other council districts’ proposals reflected the communities’ concerns. Williams’ and Viverito’s districts focused on public housing issues, while Ulrich’s district, in the Rockaways, concerned itself a great deal with the environment.

The process began in October, when thousands of community members met and brainstormed ideas. Groups of volunteers then formed into committees organized by topic and set to condensing the ideas.

It didn’t all run smoothly. Many delegates didn’t know the amount of bureaucracy that goes into budget proposals and getting projects done in New York City and had to balance learning about the process, reaching out to city agencies and, often, having a full time job. Even with the council members’ support, there was some attrition.

Another challenge came from the departments. Many were unused to the increased volume of proposals the delegates had submitted, many of which were unfeasible. Some proposals cut across multiple departments, such as the plan to fix “Lake Fort Hamilton,” a sidewalk dip near the entrance to the Fort Hamilton F train stop which routinely gets flooded during rain.

“The MTA said their jurisdiction ends a few feet from the station and the [Department of Transportation] didn’t really want to take ownership” of rebuilding a non-functioning drain and walkway, said David McGillan, a transportation committee delegate. “The parks department was the most receptive,” agreeing to plant some trees down the side of a hill where rainwater runs off. A spokesman for Viverito added that some agencies never called them back but declined to name the agencies.

Scott Gastel, spokesman for the DOT, didn’t comment other than to say that the department is always willing to discuss capital projects with all council members.

Lander painted the relationship in a more optimistic light. “It’s been really encouraging,” he said. “Agencies capital people were, for the most part, excited to engage with people.”

All the proposals have different price tags, ranging from $45,000 to $500,000 and beyond. Council members will act on the top proposals until they hit their limit of $1 million. If the amount exceeds the limit by a little bit, they can possibly work something out, said Lander.

Though it might be over a year before some of the top proposals get acted on, it has so far been a success, according to Josh Lerner of the Participatory Budgeting Project, a nonprofit organization, which tries to advance the practice in new areas. The real test will come next week when the public goes to the polls and turnout can be measured.