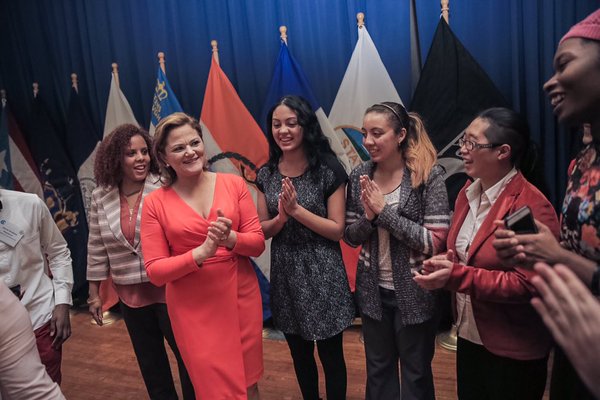 Mark-Viverito with young attendees of her speech (photo: William Alatriste)

In her second State of the City address, City Council Speaker Melissa Mark-Viverito on Thursday made it clear that she is determined to make New York a more inclusive city where different voices are heard and counted. Her message of 'More Justice,' the title for the speech, resonated in the different initiatives the speaker announced to improve civic engagement and to empower New Yorkers so that city policy is more fair and responsive to constituents.

Speaking at the Samuel Gompers Campus in the South Bronx, Mark-Viverito said she wants to kickstart the heartbeat of New York's democracy, with increased funding for participatory budgeting, expanding student voter registration, using technology to increase voter turnout, and enhancing community input in land use decisions.

She touted the success of the Council's participatory budgeting program, calling it a "laboratory for what an enfranchised voting populace is all about," and announced that Brooklyn Borough President Eric Adams will pledge $1 million to the process this year.

The last round of participatory budgeting, she said, saw increased participation owing to new outreach measures, including text notifications telling people when and where to vote. Youth participation, in particular, was high she said, with 12 percent of PB votes cast by those under 18 years old.

"Our young people can, and should be, a powerful voice in the next election," she said.

Voter turnout has been a particular challenge for New York state. In the 2014 elections, with only 29 percent of eligible voters casting ballots, New York ranked 49th in voter participation in the country, fact Mark-Viverito bemoaned during her speech.

"This generation was lucky enough to be born with the right to vote, regardless of race or gender," said City Council Member Helen Rosenthal, in a statement. Rosenthal has led Council efforts to promote Student Registration Voter Day. "Our next challenge," Rosenthal said, "is to raise awareness of the value of voting and civic participation."

Mark-Viverito placed partial blame for the dismal voting record on outdated voting laws and said the Council would push to make voting easier. She also pledged support for Governor Andrew Cuomo's efforts on voting reform, as promised in his State of the State speech, which include early voting and automatic voter registration when New Yorkers interact with government agencies.

"The public cannot stand up and be counted if we fail to modernize our voting process," Mark-Viverito said.

In keeping with this proposed modernization and tackling some of what the city has control over, Mark-Viverito announced new initiatives including a voting app and online portal to help voters locate polling places, check their registration, track absentee ballots, and obtain other election data. The city will also start to notify voters via email and text messages to improve turnout. "We are going to bring democracy right to your fingertips," she said to New Yorkers.

More than by voting alone, the speaker wants young professionals to directly participate in local government. She announced the creation of a full-time one-year Social Justice Postgrad Fellowship, which would place graduates with professional degrees in positions throughout city government.

Noting that public service is not always an option for young professionals without financial means, Mark-Viverito said, "We need to recommit ourselves to a simple yet powerful notion: New York needs to be a city for everyone, with policymaking and governance that is open to everyone."

Mark-Viverito segued into addressing the city's handling of important local land use decisions. In the last few months, there has been widespread backlash from communities against Mayor Bill de Blasio's proposals to change the city's zoning codes and to rezone specific neighborhoods across the five boroughs. Residents have claimed that the processes have been top-down, without enough local input, and that plans do not meet neighborhood needs.

The speaker proposed a solution in her speech, calling on the city to develop Neighborhood Commitment Plans along with rezoning proposals to allow people to track the city's promises. "Planning for the future of our neighborhoods should start from the ground up and infuse the voices of everyday New Yorkers into policy decisions," she said.

She also appealed to the city to refine its guidelines for the Fair Share system to invite public input and ensure that different communities receive important city services in equal measure and are not overburdened by certain types of facilities.

The speaker's discussion of increasing civic engagement was coupled with attempts to improve communication with constituents: Mark-Viverito's speech was live-streamed in Bengali this year, along with Spanish and Mandarin as it had been before. It was also available online in multiple languages and City Council social media accounts were active throughout.

This is part of a larger commitment the de Blasio administration and City Council have made to reaching out to a broad base of ethnic communities. Earlier this month, the speaker and Mayor Bill de Blasio announced new plans to utilize ethnic and community media outlets across the city.

Expanding on these measures, Mark-Viverito in her speech emphasized the need to upgrade the city's language access law, going beyond just translators, to create a more comprehensive framework.

"English proficiency should never be an obstacle to accessing city services," she said, promising a law that would require city agencies to gather data on language needs and demographics of the communities they serve. Its implementation would require the city to provide translation services for the top six languages identified. The Council will also work with the administration to provide emergency push notifications on digital devices in multiple languages through NotifyNYC.

The Speaker also said the Council will establish financial outreach and education programs for immigrants, seniors, and women, giving them greater financial literacy and access to services.

A common thread running through the speech was Mark-Viverito's emphasis on empowerment -- for communities to have a say in rezoning plans, for the youth to have a say in social issues and, in the final section of her remarks, for women to have a larger role in city government and business.

The 51-seat City Council has 14 women, five of whom will be term-limited out of the next election. Those five are all women of color, Mark-Viverito said.

"Empowering women means empowering all of us – creating a stronger, healthier, and more just society," Mark-Viverito said before she talked about the Council's Young Women's Initiative launched last year. The initiative gauged input from more than 200 experts and advocates, including young women, transgender women, and gender-nonconforming women to create policy recommendations for the city.

On Thursday, the Speaker pledged $10 million from the city over the next two years, matched with another $10 million from private charitable donations, to fund the recommendations of the initiative including programs to enhance career guidance, leadership development, youth employment, transgender health services and access to contraceptives, and to end sexual exploitation. "Young women are the very foundation, the core of our city's hope for the future," Mark-Viverito said. "So we don't need cracks in the glass ceiling - we need to shatter it, once and for all."

The speaker also addressed issues of homelessness, pledging support for a $15 minimum wage, calling on the federal government to expand housing subsidies for low-income families, and appealing to the city administration to allocate more public housing to homeless families and survivors of domestic violence. She raised the possibility of the city creating its own permanent rental subsidy program modelled on the federal system and funded partially by the state. Current programs have time limits, at times leading people back into shelters when they cannot pick up their full rent without subsidy.

The speaker also announced increased support to families and caregivers through a bill that would require the city to identify the needs of caregivers and to provide them assistance. She spoke of increased investments in after-school programs, supporting paid family leave, and a Division of Paid Care under the newly-created Office of Labor Standards.

A large part of the speech focused on an expansive criminal justice reform plan, which includes reforming the warrant system; increased oversight of city jails; improved pre-trial, reentry and rehabilitation services; and the creation of an independent Criminal Justice Commission to study and accelerate reforms. "It's time to reimagine our entire criminal justice system," Mark-Viverito said.

[Related: Mark-Viverito 'Doubles Down' on Criminal Justice Reform in State of the City]