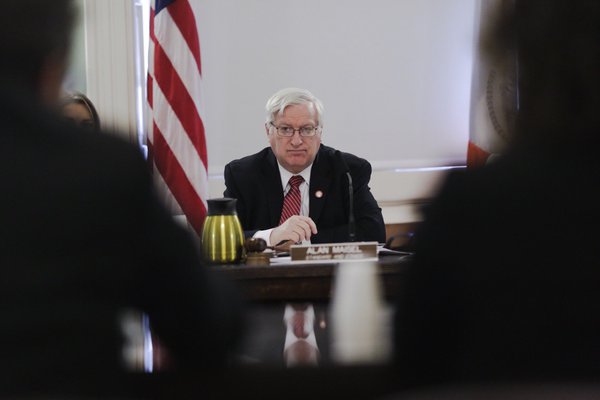 The New York City Conflicts of Interest Board is struggling to retain staff due to the the agency’s inability to adequately compensate employees, according to Alex Kipp, director of the training and education unit. Kipp and other representatives of the COIB testified Tuesday at a City Council budget hearing, explaining their budget constraints as they work to ensure that a growing city workforce acts ethically.

Mayor de Blasio’s $82 billion preliminary budget allocates $2.29 million to COIB, a 3.1 percent increase from last year’s adopted budget. The modest increase is primarily due to collective bargaining increases that were included from the city’s November financial plan, said City Council Member Alan Maisel, chair of the Committee on Standards and Ethics, which has oversight of COIB.

The COIB budget remains essentially unchanged, despite the fact that the agency workload has significantly increased in recent years.

“One difficulty that we’ve continued to encounter, and we’ve felt this especially this year, is retention,” Kipp said. “The salaries are quite low for training staff, and we’ve tried various ways to ameliorate that situation unsuccessfully.”

In 2015, COIB made three separate requests for more funding to raise the salaries of agency employees, all of which were rejected by the Office of Management and Budget (OMB).

COIB initially made a proposal to raise salaries across the board. After it was rejected, agency leaders came back with another proposal to raise the salaries of specific individuals, including trainers, which was also rejected. Then, COIB asked for additional funds just for the three trainers and one other position in the agency which are “acutely underfunded,” only to have that proposal rejected as well.

As a result, COIB, one of the smaller city agencies with just 22 full-time employees, lost at least two employees in 2015, one of whom left for a similar position with another city agency offering more money.

“In December,” Kipp said, “my senior trainer was offered a position with the Housing and Preservation Department” to improve their inspector training program. “They offered him a $10,000 raise to do so. We asked for $10,000 to match that offer, and it was rejected. And so, we lost him.”

Maisel asked why all of COIB’s requests had been rejected, since “the city is obviously paying people more in other agencies and departments.”

Kipp said they did not have information as to why their proposals were rejected. The entire proposal to raise the salaries of COIB employees across the board was “less than $200,000,” Kipp said. “By the time we were looking at just these targeted proposals, we were looking at less than $75,000 in personnel costs. I don’t know why they rejected it.”

In defense of OMB, Wayne Hawley, deputy executive director of COIB, added that the two agencies’ relationship on budget matters typically “range from reasonably good to quite good…but this is one particular area where we feel like we could really use some help.”

Yet, COIB has only four employees on staff who carry out such training, meaning, as Kipp said at the hearing, “while we had a record-breaking year last year with about 35,000 people trained, we’re never going to be able to hit 150,000-175,000 people a year with live training classes.”

COIB was “hoping to start development of [an online training] system in late 2015, but, because of staffing setbacks,” had to postpone the project. Beginning a pilot program to conduct conflicts of interest training electronically is something COIB hopes to achieve this year.

In 2015, COIB taught 855 ethics classes, a 42 percent increase from the previous year, according to COIB’s annual report. COIB’s Enforcement Unit, which also consists of just four attorneys, opened 544 new cases in 2015, another record high for the board, 484 of which were closed by the year’s end.

At Tuesday’s hearing, Council members asked COIB to come back to them with something in writing that details exactly what COIB needs in order to function as effectively as possible, so that Council members can include it in their preliminary budget response.

“It would be wise of us to spend more on prevention. We are increasing the budget of the Department of Investigation,” Council Member Brad Lander said, referring to the other city agency tasked with preventing and rooting out unethical behavior, “but if we could spend a bit more on things that keep people out of trouble, obviously, that would be wise to do.”