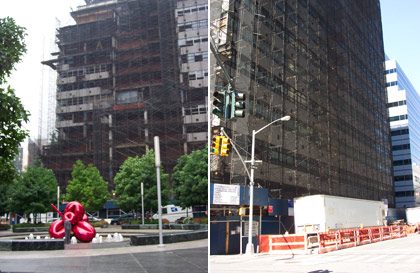 Standing on the 52nd floor of his new building at 7 World Trade Center, developer Larry Silverstein recently declared the structure a monument to what private enterprise can do. If that is indeed the case, then many would no doubt see its neighbor, Fiterman Hall, as a monument to what government cannot, or will not, do. Certainly, if Silverstein's office building epitomizes what has been accomplished in Lower Manhattan since 9/11, Fiterman offers mute testimony to how much remains to be done.

Fiterman had served as an academic building for Borough of Manhattan Community College when the World Trade Center twin towers collapsed on 9/11 and debris from the original 7 World Trade Center damaged its facade. Since then, Fiterman has remained vacant and unused. Today workers have decontaminated much of the building, but doubts remain about if and when the structure will come down and when work can begin on something to take its place. Amid the billions being spent at Ground Zero, the dispute at Fiterman centers around some $60 million and who -- in this time of tightening budgets-- should pick up the bill.

"The city and state are playing ping pong as to who should ante up, and the ball has not landed," said City Councilmember Alan Gerson, who represents Lower Manhattan. And so, he said, some worry the site will become another vacant spot in the downtown cityscape -- a bleak counterpoint to the shiny red sculpture between it and 7 World Trade Center.

A 15-story building constructed in the 1950s, Fiterman began serving BMCC faculty and students in 1993. A major renovation there had been almost completed when the 9/11 attacks took place. While officials originally hoped the building could be cleaned and repaired, they eventually determined that, due to mold and the dust from the adjacent destroyed buildings, Fiterman needed to be razed, or in the parlance of those involved, "deconstructed." 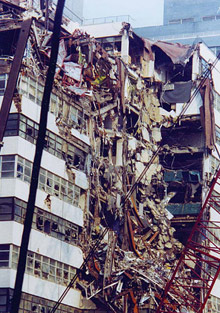 For years, though, little happened. By many accounts, Fiterman became enmeshed in jurisdictional and funding disputes between the city, the state and the City University of New York, of which BMCC is a part. Top officials, Steve Cuozzo of the New York Post has written, seemed less interested in Fiterman than other downtown projects. George Pataki, then governor, "ignored Fiterman Hall entirely," as did Mayor Michael Bloomberg, according to Cuozzo.

Finally, now, the decontamination is underway, with workers removing furniture, rugs, non-structural wall and the like.

"Everything that is not the skeleton has come down or is about to come down," said Mark Violette, spokesperson for the New York State Dormitory Authority, which is overseeing the work for CUNY -- much like a contractor might oversee a kitchen renovation, according to Violette. Workers pack the debris into boxes about the size of a large television set and the boxes -- tripled-wrapped are loaded onto trucks for removal. So far, Violette said, the debris has filled 280 tractor-trailers.

The next step calls for demolishing the elevator shafts and finally for cleaning to a "dime standard" -- where workers remove any piece of dirt or other material larger than a dime.

The authority anticipates finishing the decontamination by late December 2008 or early January 2009, a few months later than anticipated partly because the authority has had to go back to the EPA to request minor changes in the plan.

While all of that proceeds, the next step remains in doubts.

CUNY knows what it would like to do. It wants to demolish Fiterman. To do that, it will require another permit from the EPA.

But even more ticklish is the issue of what would then occupy the then vacant space where West Broadway and Greenwich Street intersect.

CUNY wants to build there. Noting that BMCC currently has 21,000 students -- several thousand more than on 9/11 -- Michael Arena, director of communications and marketing for CUNY said, "they are an institution that's bursting at the seams."

To remedy that, CUNY has proposed placing a new facility on the site that the university thinks would benefit BMCC and the surrounding area. "What's gotten lost in the discussion is the impact the new building will have on the community," Arena said.

In addition to classrooms, the new Fiterman Hall would include a public gallery on the ground floor, a meeting space on the top and a public plaza. "It's not just a series of isolated classrooms slapped in the zone," said Arena. (For a video on the proposed building, click here.)

Before that can happen, though, CUNY has to come up with the money, estimated, according to various accounts, at about $340 million. Under the rules governing community colleges in the City University, the state and city split that.

According to testimony prepared by Noah Pfefferblit, district manager for Community Board 1, which covers lower Manhattan, the proposed demolition and the new building would cost about $340 million with the city and state each contributing $98.6 million and the rest coming from insurance funds, the Federal Emergency Management Agency, the Lower Manhattan Development Corporation and the 9/11 fund.

By many accounts, the city has balked at paying what some observers believe is its fair share.

Last May, Community Board 1 unanimously passed a resolution calling on Bloomberg "to allocate sufficient funds in this year’s budget to match the amount allocated by the state so that Fiterman Hall can be demolished and redeveloped in the coming year."

While the Bloomberg administration did not comment for this story, earlier this year, it said it had in fact anted up $80 million. Its critics say the city really has paid only $20 million and is trying to take credit for Federal Emergency Management Agency funds. But the administration has countered that the $60 million in question really came from the city -- not Washington.

More fundamentally, the city has expressed qualms about what it sees as CUNY's skyrocketing cost estimates for the project, now put at $325 million. Of course,the longer the dispute drags on, the more costs are likely to increase.

"The city and state and CUNY are all pointing their fingers at one another," Gerson said. "It's the craziest situation I've ever encountered in terms of funding."

Whatever the merits of the arguments, Arena said CUNY wants to see the dispute settled. "There certainly is a need for the project and we're hopeful it can be resolved shortly," he said.

For his part, Gerson thinks all those involved need to go into a room and stay there until they can solve the funding issue once and for all. And, he said, "I'm happy to keep the door locked."

CORRECTION: This story originally reported the cost of the new Fiterman Hall at $430 million. According to CUNY, it will cost $325 million. The article has been corrected.