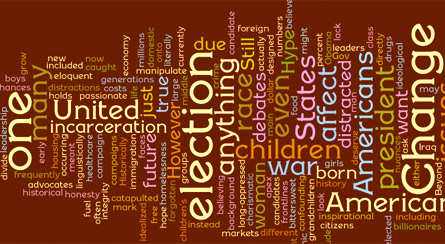 When many American children-- boys or girls of any ethnic background -- are born, they often are told by proud parents, "You can be anything you want to be, even the president of the United States."

This inspirational sentiment will ring poignantly true for one candidate this year. The 2008 presidential race will mark an historical apex, where the winning ticket will include either a woman or an African-American man. I did not grow up believing I could be president, but after 2008, my children and all American children, regardless of race or gender, might look at their chances in a different light.

Gov. Sarah Palin, and Sen. Barack Obama are now the faces of long-oppressed minority groups. Each is charismatic and photogenic, and according to early polls, is idealized as the ultimate champion by supporters. Still, many Americans from all walks of life wonder if this election promises true change, or instead, more of the same traditionally stale rhetoric.

Both candidates have been catapulted onto political frontlines via linguistically eloquent and passionate debates designed to sway the voting population. However, frequently forgotten is that this election is occurring during war. Historically, war is a time when the economy thrives and the dollar remains strong; but, due to domestic and foreign issues including the bitter divide over the Iraq war, in 2008, it is not. As each party advocates change, promising a brighter future under new leadership, fuel and food costs are skyrocketing while housing prices and the stock markets plummet. Americans are distracted.

I see large numbers of Americans caught up in the hype of change, literally led astray by politicians who seem willing to say anything to win. We are distracted by other troubles too, such as drugs, lack of healthcare, homelessness, immigration and crime. I ask, who holds the power? Isn't it supposed to be "we the people," and not just a few billionaires spending millions on campaigns meant to strategically manipulate gender and race into the main issues?

I don't believe the 2008 election results will directly affect me in any practical way, but it will affect the ideological perspectives of future generations, my children's included. Sadly, I am someone who lost the right to vote due to incarceration, and though I am separated from many distractions, this election with all of its unique nuances, is bittersweet. To witness history, but not actually be a factor in the election process, is personally confounding.

The United States has one of the highest incarceration rates in the world, and I'm just one person. I may be a woman, but I'm not one of the richest 2 percent, or one of the middle class: I'm not even free. The issues currently on the table affect American citizens who deserve honesty and integrity from elected leaders, not shady campaign ploys. However, after all the debates are over, I will still hope for change, and yes, when my grandchildren are born, I will whisper, "You can be anything you want to be, even the president of the United States."