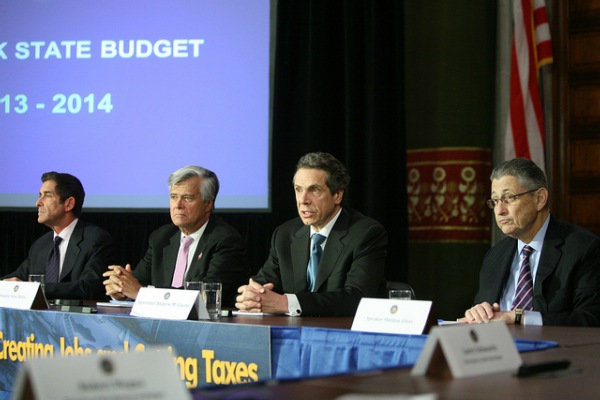 ALBANY, N.Y. — Black and Latino state lawmakers say their signature issues were sidelined during negotiations over the budget, leaving them wondering if they can get their communities’ voices heard in Albany.

“On issue after issue we just aren’t being listened to,” said Democratic Sen. Kevin Parker, of Brooklyn, in an interview last week. “This is not working together. Maybe in the end I don’t get what I want, but at least hear me out.”

Espaillat and other black and Hispanic lawmakers say the causes they had championed only to see them jettisoned during negotiations that culminated in a $135 billion budget on Thursday would have benefited people of color in particular.

They included helping to keep open a struggling Brooklyn hospital that provides training to minority doctors and employs 500 people; and the decriminalization of the possession of small amounts of marijuana that could prevent tens of thousands of young men and women from having their records irreversibly damaged each year.

“New York City got left behind in this budget, “ said Sen. Adriano Espaillat, of northern Manhattan. “I like the governor and I have had a good working relationship with him. But I am hopeful we can bring forward our ‘spring of discontent’ and discuss our issues with him soon.”

Harlem Assemblyman Robert Rodriguez agreed. “I think we absolutely know there is a disconnect between the rank and file and what got done in the budget,” said

But the most painful setback for the lawmakers was the lack of momentum on the state’s proposed DREAM Act that would have extended financial assistance for secondary education to undocumented immigrants.

“I have never seen one single issue that has been more important to our community than the DREAM Act,” said Sen. Adriano Espaillat. “This is our gay marriage, this is our gun control.”

Espaillat noted that Cuomo has been ahead of national issues with gun control and gay marriage, and passing the DREAM Act would once again demonstrate the state’s leadership on a national level. A separate, federal version of the DREAM Act would provide permanent residency to undocumented immigrants who graduate high school, arrived in the country as minors or lived in the country continuously for five years before the bill is enacted.

“You can’t make everybody happy,” Gov. Andrew Cuomo told Susan Arbetter on the Capitol Pressroom on March 25 in response to criticism about the budget. “This budget in many ways does more work on more levels than any budget we’ve ever done.”

Cuomo’s office declined to go on the record for this story after repeated requests for comment.

It wasn’t just minority legislators who were miffed at the issues ignored in the state budget. Mayor Michael Bloomberg lit into Republican Sens. Dean Skelos, Marty Golden, and Simcha Felder (a Democrat who is caucusing with the Republicans) last week, blaming them for failing to allow a speed camera program that would have been instituted around schools to prevent speeding around schools. Bloomberg is also a supporter of the DREAM Act.

Some legislators have said that there wasn’t enough outcry from advocates of the DREAM Act, but Espaillat disagrees. “We had thousands of people there pushing the DREAM Act. Maybe they just weren’t listening to us,” he said.

Eric Soufer, a spokesman for the Senate’s breakaway Independent Democratic Conference, said that IDC leader Sen. Jeff Klein supports a “fully funded DREAM Act." He said key reforms back by black and Hispanic lawmakers failed to get into the budget because the Senate Democrats didn’t have enough votes “to advance the governor's reform proposals."

For decades, Albany has been controlled by three white men. That changed briefly when Senate Democrats won the majority in 2008. Democratic Sen. Malcolm Smith, who is black, became majority leader and senate president but only after going to great lengths to woo the support of Sens. Pedro Espada, Ruben Diaz, and Carl Krueger. All three legislators won positions and power that were supposed to be reserved for more tenured members.

Budget negotiations were different this year only in that there was an extra man in the room, with leadership of the Senate split between a breakaway faction of Democrats and Skelos.

Other legislators blame the alliance between the IDC and the Senate Republicans for marginalizing minority issues. When Republicans and the IDC cut a deal for a power-sharing agreement last year, many minority groups were aghast because the five members of the IDC were in effect blocking the influence of a great number of minority legislators from the city. The IDC had only one member of color and only five members total .

The NAACP, Rev. Al Sharpton and a number of black and latino legislators decried the union as discriminatory. NAACP President Hazel Dukes wrote Cuomo and implored him to get involved to stop the IDC from joining the Republicans. “If what I read is true, there is one African American, no Hispanic and 35 White members in this important leadership group,” wrote Dukes. “This ‘cozy’ little cabal excludes women, gay and Hispanic legislators from most important leadership positions.”

Parker and Espaillat both say they want to see a fundamental change in how budgets are negotiated so that the needs of their communities are actually addressed or at least are heard by those who are hashing out the budget.

“This kind of stuff matters to voters,” said Parker. “Voters don’t care about campaign finance reform but budget issues they understand because it involves money, it involves what is happening in the district. It is the most important thing I do. We are talking about the third largest budget in the country and to not have a truly democratic process goes against the fabric of America.”

It will take a concerted effort from lawmakers to pressure Cuomo into action on their issues. The governor has a number of major policy points he still wants to get done this year including his women’s equality agenda. But with his approval ratings tanking with Republicans and upstate, Cuomo may be loathe to spend political capital on The DREAM Act or any other issue that is being championed by Hispanic and black lawmakers.

Image of the four men who ultimately decide the state budget, courtesy of the governor's office.