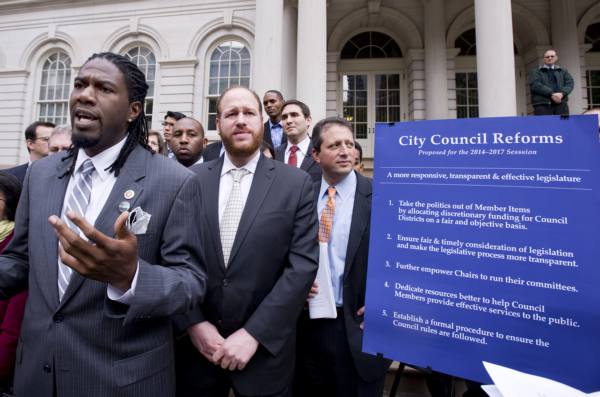 With just under a week until the general election, a group of incumbent and almost-City Council members are calling for systemic reforms to how the legislative body operates.

The slate of reforms announced earlier today at City Hall aim to decentralize the next speaker's key powers over member items and committees, boosting the power of individual Council members and committee chairs to set the city's legislative agenda.

The current speaker, Manhattan Councilwoman Christine Quinn, has faced criticism over the past seven years for the process by which Council members get discretionary money as well as how bills make it to the Council floor.

The speaker's office did not respond to requests for comment about the proposed reforms by the time of publication. Council members at the announcement steered clear of any accusations or complaints about the body's rules under Quinn. Supporters instead framed the package of reforms as a means to improve the Council going forward.

At least one Council member publicly slighted by the rules system under Quinn applauded the reforms. Queens Councilwoman Elizabeth Crowley, who faces her own general election challenge from Republican Greg Caruana, said she was speaking specifically in support of the changes to the distribution of discretionary funding to members.

The New York Times reported earlier this year that Crowley got into a tiff with Quinn over a poorly timed press release. Following the incident, the newspaper reported that Quinn cut Council funding to Crowley’s district.

"Right now, too much politics goes into who gets how much money for discretionary funds," Crowley said. "It needs to be equitable, it needs to be fair and it certainly needs to be transparent. These are tax-dollars we're talking about, and New Yorkers deserve to know how their tax-dollars are spent."

Pressed for how the platform is more fair in spreading out discretionary money, the Council members supporting the reforms had no one answer.

Brooklyn Councilman Brad Lander pointed to three recommendations for discretionary funding: that it be distributed equally among members; through a need-driven formula; or through issue-specific initiatives, such as domestic violence or immigrant opportunities.

"The requirement is fair and objective," Lander said, adding that any of the options would also be transparent. "You could use a mix of all three of them."

Lander wouldn't answer, however, if the rules were a litmus test for the next speaker. The Brooklyn councilman is a leading member of the Progressive Caucus, which is expected to grow in the next Council and could play a major role in deciding the next person to lead the chamber. DNAInfo.com previously reported that the caucus was mobilizing an effort to restructure the Council.

Other provisions in the Council reform platform include creating an independent drafting unit that would make bill-making more transparent, as opposed to the current method of Council staff being responsible for drawing up legislation. It would also mean expanding the city's current online database and improving how members communicate with their constituents electronically.

Council committee chairs, typically appointed by the speaker, would also be given more control over their respective committees, including schedule, topics and staff. The new vision for the Council would also create a procedure by which members can file complaints with the body's rules committee if they think Council rules are being broken.

Citizen Union Executive Director Dick Dadey praised the proposals, remarking on what he said was a gradual movement within the Council towards improved transparency.

"When we first started looking at this, the glass was pretty empty," Dadey said. "Over the last couple of years, that glass has become half full. We're very pleased to see the level of commitment being shown here today to fill that glass even higher."