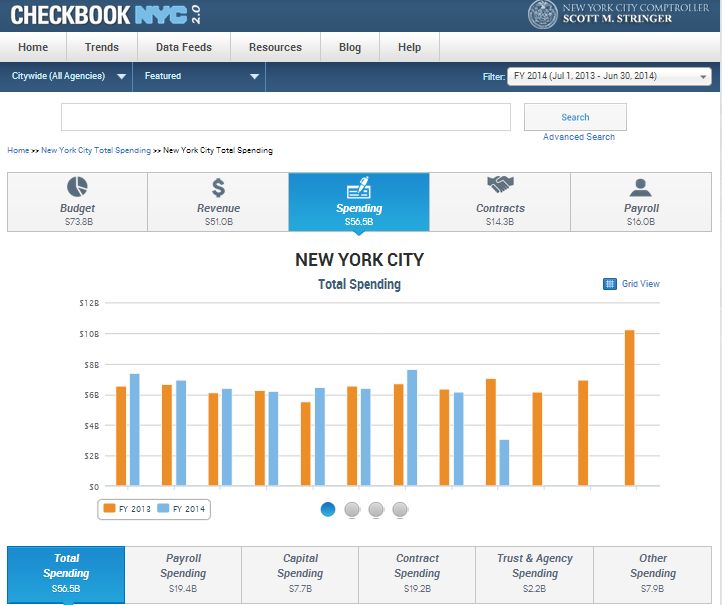 Albany, N.Y. – With the dawn of national Sunshine Week on Sunday, good government advocates will intensify their campaigns for more transparency in New York State, where progress in open government is seen as a mixed bag.

The state has made headway in providing online access to public records, but the state legislature and city government are failing to grant greater access to meetings where policy decisions are made.

New York leads the nation in open-data initiatives, according to John Kaehny, executive director of Reinvent Albany, an organization advocating for an open, accountable state government.

Kaehny attributes the state's success in this area to such websites as Gov. Andrew Cuomo's Open NY, Comptroller Thomas DiNapoli's Open Book New York and Attorney General Eric Schneiderman's NY Open Government. These sites offer access to a wealth of data, from the spending practices of state agencies to who is lobbying state officials.

"We can say, 'we are the best at this,' said Kaehny, adding that the state Department of Health won a national award last year for having the best open data site in the country.

However, the state legislature – specifically the Assembly ¬– has neglected to take advantage of available technology and expand public access by webcasting committee meetings. The legislature is, of course, a politically charged place, and relinquishing even the slightest bit of power is often anathema to those who hold it.

Assemblyman Andrew Hevesi is sponsoring a bill that would require all committee meetings be webcast and votes be posted online within 24 hours. He told NY1 in January, however, that Assembly Speaker Sheldon Silver's staffers informed him the bill has no chance of passing. The Senate already webcasts its committee meetings, but without being required by law to do so.

"The State Assembly should work toward implementing these best practices by webcasting their committee meetings, aligning with what their colleagues in the State Senate already do" she said.

Legislative committees include members from both parties, but are chaired by a member of the majority party. They are organized by and deal with a variety of issues such as housing, education, and insurance. And, committees are typically used by the majority party to quietly kill legislation that it does not want to see come to a floor vote. It is easier to allow bills to die in committee – particularly when the tactic isn't part of a webcast – than to allow a floor debate and full-body vote.

Senate committees have allowed debate on legislation, but debates in Assembly committees are known to be much more of a formality with a bill's fate decided before it even reaches committee.

The committee process in Albany is even more opaque because committees provide scant information about their oversight and what they do during their meetings.

"Every committee should provide a description that is easy to find through the Assembly and Senate websites that details the types of bills that move through that committee, general areas of focus, significant topics that were a focus last session and are a focus this session, and agencies that it oversees," said Maggie Williams of The Advocacy Institute, which supports legislative advocacy by social justice organizations.

"Anything less than clear, accessible, up to date information is unacceptable – especially with the technological tools at our disposal."

At the city level, New York's Local Law 103 went into effect this month and requires city agencies, task forces and commissions to webcast their meetings. As Gotham Gazette reported earlier this month, most groups have not been compliant as of yet, and there is widespread confusion about the law's implementation and oversight.

The bill was championed by then-Councilwoman Gale Brewer, an outspoken open data reformer, who is now Manhattan borough president. While the law is indicative of reform, it is unclear which city agency is in charge of ensuring compliance with its mandates. Meanwhile, Mayor Bill de Blasio's administration says it is committed to making the law work.

The city comptroller's office operates an online portal, Checkbook NYC, that is similar to the state comptroller's site for publishing state contract information.

While New York State is generally ahead of most others on open government, the state lags behind the city in most regards, including the aforementioned differences regarding legislature webcasting.

Additionally, there is no state-level parallel to the city's 311 system, by which New Yorkers can provide and seek information, including by logging complaints about city services and infrastructure.

"The fundamental problem is the state does not know itself well enough yet," said Kaehny. With the exception of the Department of Health, Kaehny noted, state agencies are not actively seeking or tracking information from their users.

Perhaps the most important divide between how the city and the state approach open data and transparency is how each deals with the cornerstone of government data accessibility: the Freedom of Information Law (FOIL).

The state has no central clearing house for FOIL requests and there is a sense among advocates and journalists that FOIL requests are not treated equally in Albany.

There is no system for tracking FOIL requests, whether they are approved or not, or how quickly they receive a response.

"FOIL itself is completely opaque," Kaehny said. "We don't know when FOIL requests are received if they are fulfilled. There have been hearings in Washington in the last couple of days on FOIL reform. Those hearings are based on reporting metrics we don't even have in New York so we can't even complain about it."

Kaehny said he has heard from several people who are concerned that "commissioners set requests aside while others are expedited."

Meanwhile, a recent report by the Ithaca Journal showed that of 86 state agencies, 79 were not complying with the Freedom of Information Law's requirement that each state agency keep up-to-date "subject matter lists" available online.

In New York City, a bill that would create an online hub to track FOIL requests is set to be introduced at the next council session. Sponsored by Councilman Ben Kallos, the bill would create a website to allow any New Yorker to file an online request that would then be linked to the data in machine-readable form.

News reporters have expressed some reluctance to file online requests for fear of alerting competitors to their story ideas, Kallos said in a brief phone interview. His legislation will address those concerns, he promised.

Brewer, who helped create the law, said she thinks having a single portal for FOIL requests could work in tandem with the open-data websites each agency maintains. Requests could be answered quickly if the information is already available on another site, she said.

Kallos expects that the mayor will support his bill because as public advocate de Blasio issued a report that showed major inconsistencies between city agencies and their responses to FOIL requests. De Blasio called on Mayor Michael Bloomberg at the time to track and report on the responsiveness of every city agency to FOIL requests.

Kallos feels the governor could possibly be on board too. Advocates hope that there will be more pressure on Albany to pass a FOIL-tracking bill if the City Council sets the precedent.

"I think the governor has made a commitment to Open New York and open data," Kallos said. "The more the city can do to set an example with our progressive governor, the more we empower him to do the right thing."

One major discrepancy between open data access in New York City and at the state level is exposure of which subcontractors are used by firms that win government contracts. The city is set to make all subcontractors public while the state has no such plans.

Advocates say that being able to see which subcontractors are getting work through the state and comparing that to contributions being made to politicians could go a long way toward ending the "pay-to-play" culture in Albany.

"It is way more likely for a local subcontractor to give [a campaign contribution] to local politicians than for a large corporation," said Kaehny.

Advocates for government transparency and accountability would also like to see the creation of a dataset of companies that benefit from tax credits from the state. Cuomo's first tax reform commission headed by Carl McCall released a report last year that found the state's tax breaks for businesses have tripled from 2005 to 2013.

Kaehny said the state's tax credits are in desperate need of more transparency.

"The state gives out $1.7 billion in tax credits each year and we don't know who the recipients are," he said, "The pay-to-play risk is really high."

During Sunshine Week, advocates will be calling for changes such as these to broaden the scope of government data available to the public and improve the agility with which government can respond to new information, policies, and needs.

Sunshine Week was launched in 2005 by the American Society of News Editors. It is observed in mid-March each year to coincide with the March 16 birthday of James Madison, the nation's fourth president and champion of an informed electorate.

"A popular government without popular information, or means of acquiring it, is but a Prologue to a Farce or a Tragedy, or perhaps both," Madison wrote in 1822.