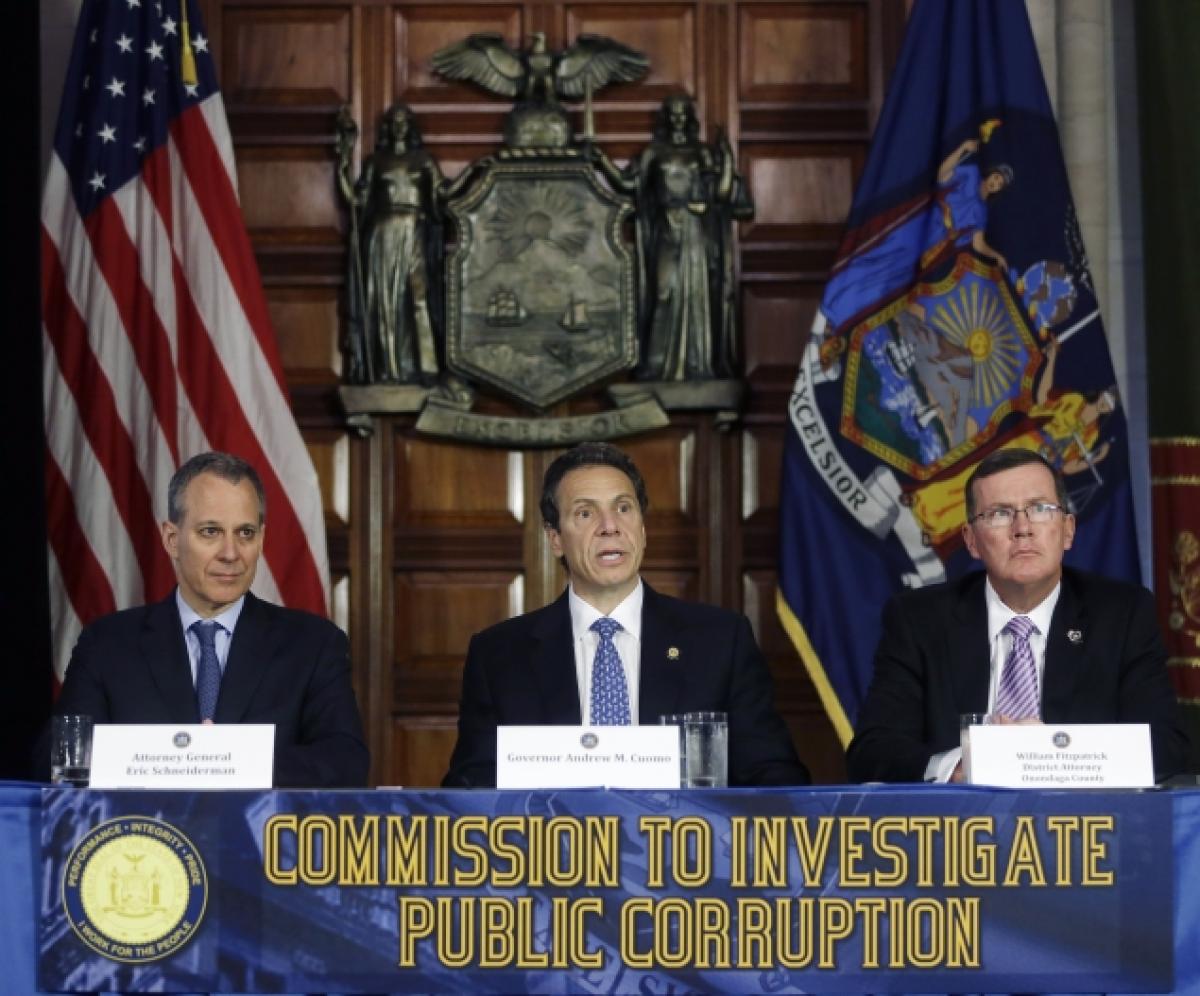 Albany, N.Y.---"Fishing expedition!" "Abuse of powers!" "Bullying!" These are all things legislators have said about the Moreland Commission on Public Corruption, which was convened by Gov. Andrew Cuomo on July 2, 2013 in order to investigate wrongdoing in Albany and make recommendations for reform.

After being elected in 2010, Cuomo had long threatened to form such a commission, but in the Spring of 2013 at least two legislators wore wires as participants in FBI investigations and several more were indicted. The state legislature balked at Cuomo's reform proposals so he formed Moreland.

But according to members of the commission and advocates, the genie is already out of the bottle: even if the legislature gets its way and the commission is de-funded, investigations have begun, threads have been unraveled, and data has been collected.

On Monday, Moreland Chair and Onondaga County District Attorney William Fitzpatrick said during a live chat for Syracuse.com that if the legislature is successful in shutting down the commission, investigations will be forwarded to the proper agencies so that they can be pursued.

Other commission members and staffers have recently expressed frustration that the hard work they have put into investigating the culture of corruption in Albany could be bartered for a less-than-ideal agreement on election and ethics reforms in the state budget.

Sources on and close to the commission told Gotham Gazette that Moreland has dug up plenty of smaller offenses, such as legislators falsifying their travel records for their own financial benefit, as well as larger offenses including massive violations of campaign finance law.

On Wednesday, the FBI raided the office of Assemblyman William Scarborough and left with boxes marked "evidence." Scarborough told reporters that the FBI, along with Attorney General Eric Schneiderman, was investigating his possible abuse of Assembly travel expenses.

Last week, Assembly Speaker Sheldon Silver called the commission "a fishing expedition," leading Fitzpatrick to call Silver's comments, "maybe the dumbest" thing he had heard during his time in public service. "Perhaps he hasn't noticed, but several dozen fish have been removed from his chamber under his watch for blatantly stealing from the tax-paying public," Fitzpatrick wrote during the live chat.

A number of rank-and-file legislators and staffers said they have not had Moreland on their minds as of late; they feel confident the commission will be dealt with by the leadership in budget negotiations. But a few acknowledged in private conversations on Wednesday that the FBI's presence in the capitol was a reminder that the commission is still out there.

"The D.A.'s comments were very clear," said Karen Scharff of Citizen Action NY, a social justice organization. "These investigations are going to be pursued, the legislature can't stop that, and I hope that they wouldn't want to."

Citizen Action has lobbied Cuomo and legislative leaders to enact a system of public campaign funding that it says would reduce the pay-to-play culture that sees large donors pressing legislators to support or introduce favored legislation.

Scharff pointed out that three of the four men negotiating the budget support public financing of campaigns: Silver, Independent Democratic Conference Leader Jeff Klein and Cuomo have all said they support a public matching system similar to the one used in New York City. Republican Senate Leader Dean Skelos has publicly bashed such a system, but the budget proposal drafted by Skelos and Klein and passed by the Senate did include vague support for such a system. As budget negotiations continue it is hard to tell how committed to campaign finance reform any of the three supporters really is. Advocates hope that Cuomo won't simply say that Skelos opposed the measure and therefore it didn't make it into the budget.

For its part, Moreland has also further exposed the failings of the state's much-maligned Board of Elections (BOE). One Moreland hearing focused on the Board, which is run by both a Democrat and a Republican, regularly stopping investigators from doing their jobs, in some cases telling them to stop being so inquisitive. Good government groups claim that cases they refer to the BOE almost always end up being dismissed despite heavy evidence that the law has been broken. Cuomo has proposed creating an independent election enforcement agency.

Insiders point out that even if an agreement is struck to end Moreland and do away with its investigations in exchange for some sort of reform, altogether squashing its work would be almost impossible to accomplish.

The district attorneys who chair the commission could easily pick up the threads of investigations once the commission is disbanded. Many of the commission's investigators come from prestigious backgrounds and have powerful connections in the law enforcement community - staffer Kelly Donovan is the executive deputy attorney general under Attorney General Eric Schneiderman while others have deep connections to the U.S. Attorney's Office.

"Now that this has started, there doesn't seem to be any way to put the genie back in the bottle," said Alex Camarda, director of public policy and advocacy at Citizens Union (Citizens Union's sister organization, Citizens Union Foundation, publishes Gotham Gazette).

Bill Mahoney, research coordinator for the New York Public Interest Research Group (NYPIRG), cautions, though, that Moreland has the kind of tools at its disposal that make running a massive investigation into corruption in Albany feasible, but that local district attorneys may not have the staffing or funding to follow up. "People who are concerned about wasting taxpayer money should want to see Moreland continue its work," said Mahoney, who added that the vast majority of legislators likely aren't under investigation and should support removing those who break the law.