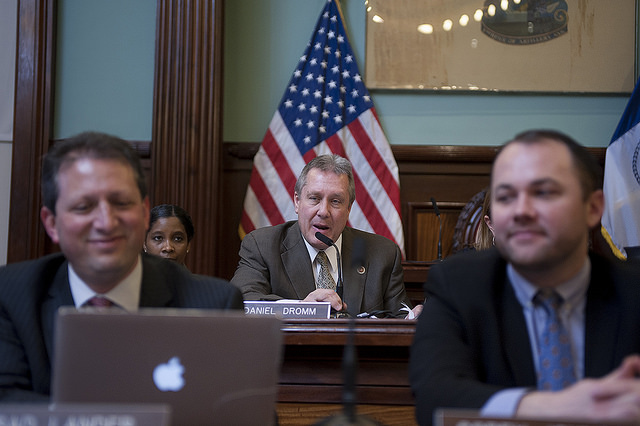 The City Council education committee oversight hearing scheduled to look into Success Academy C.E.O. Eva Moskowitz twice closing her schools for political rallies has been postponed until April 24th, according to a spokeswoman from education committee chair Daniel Dromm's office.

The spokeswoman said there were scheduling conflicts for multiple parties, but would not confirm if Moskowitz was among those or if there had been contact between the committee and Success Academy.

Gotham Gazette reached out to Success Academy to confirm if Moskowitz was invited or planned to attend. Multiple requests for comment were not returned.

The hearing, labeled on the council's website as "Oversight - Charter School Management and Accountability," was scheduled for Tuesday, April 8th.

Dromm originally publicized his intention to hold the hearing on March 1 after Moskowitz announced she was closing all 22 of her charter schools and busing students to Albany for a March 4 rally. The protest was in response to Mayor Bill de Blasio reversing approval for three Success Academy schools, one existing and two new.

Gov. Andrew Cuomo attended the rally and later lent his support to charter schools with several legislative items in the State budget including a ban on charging rent for charters and a requirement for co-location or rental assistance.

It was the second time this school year Moskowitz has closed her schools for political rallies. The first was in October, also in response to de Blasio. At a campaign event, de Blasio suggested he would make wealthy charter schools pay rent, naming Moskowitz specifically.

The March 1 statement from Dromm said he would also look into the "extraordinary salaries" paid to Success Academy administrators.

As of the writing of this article, the council's website still lists the hearing for April 8th.