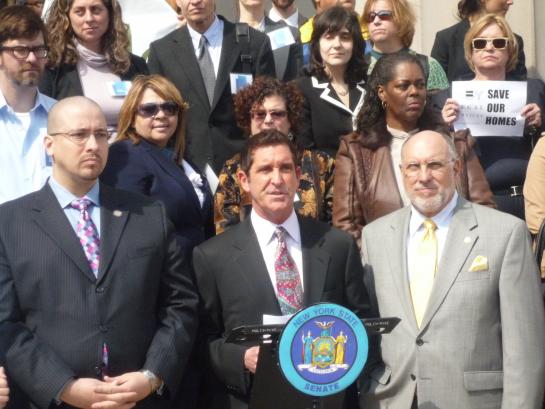 The Bronx could become a flashpoint in the 2014 battle for control of the New York State Senate as Sens. Jeff Klein of the IDC and Gustavo Rivera of the mainstream Democrats both face the possibility of primary challenges.

While there is no love lost between the two men, it may not actually be in either's interest to see the other challenged. Primaries for the two could test the allegiances of other Bronx activists and elected officials while making Klein and Rivera appear to be meddling in each other's district - even if they aren't.

Each man's potential challenger says he is motivated by the incumbent's policy positions.

Oliver Koppel, a former city council member, assembly member, and attorney general, has said his possible challenge to Klein is motivated by the fact that Klein has allied himself with Senate Republicans, which has in turn stymied and watered down progressive legislation that would benefit the 34th Senate District and the state.

Current City Council Member Fernando Cabrera has kept his possible challenge to Rivera fairly low profile - a spokesman for his campaign told Gotham Gazette Cabrera isn't giving interviews regarding a run at this time - but according to a number of Bronx insiders, Cabrera has told them that he feels Rivera has betrayed the values of his district by supporting same-sex marriage and other socially progressive measures as well as going against the Bronx establishment's major endorsements in the races for mayor and speaker of the City Council.

A spokesman for Klein said the IDC would not comment on a theoretical challenge from Koppell, who, for his part, has said he will announce a decision about a run soon after the just-passed Easter holiday.

Rivera would only comment on a potential primary to say that he is "focused on my constituents" and that he takes, "any challenge seriously."

Klein and Rivera may want each other out of office, but seeing the other primaried may make their own race more difficult. Rivera told Gotham Gazette that he thinks Klein's arrangement with Senate Republicans is "untenable" and Rivera, along with Sens. Liz Krueger and Neil Breslin, has historically been one of the most vocal critics of Klein and the IDC. Gary Axelbank, host of "BronxTalk," said that it is well known that neither Klein nor Rivera is a fan of the other, but that animosity could hurt Rivera. "Jeff Klein has the kind of resources that if the Rivera-Cabrera race is perceived as a Klein-Rivera race the councilman could gain quite a few resources."

Axelbank said that those loyal to Klein may jump to support Cabrera over Rivera without any prompting just because of the kind of power Klein wields.

But there is also the flip side of that coin. Cabrera is an unabashed social conservative and will likely garner the support of Bronx Sen. Ruben Diaz and his followers. This could be a boon for Cabrera, but the race being about Rivera's progressivism is likely to hurt Klein if he is perceived to be directly or indirectly supporting a candidate, in Cabrera, who is anti-choice and anti-gay.

Progressive advocates who are urging Koppell to challenge Klein argue that Klein has helped suppress or dilute a number of progressive initiatives including the DREAM Act, a minimum wage increase, and the Women's Equality Agenda. Liberal activists and labor groups would very likely unite behind Rivera against Cabrera, but its unclear if the Senate Democrats who are being pulled in multiple directions this year by IDC and Republican-backed challenges will be able to give Rivera any financial support.

But Cabrera carries other, major political baggage. He unexpectedly came out against the plan to turn the Kingsbridge Armory into an ice sports facility, saying that his constituents had concerns about noise and traffic, but the developers and a number of other insiders said that Cabrera had been privy to negotiations and had no problems with the deal until he tried to get the ice center to funnel $100,000 annually to Community Action Unlimited, an organization that he happens to control.

The IDC already had to deal with being associated with an ethically-troubled ally when Sen. Malcolm Smith was indicted on bribery for trying to buy his way onto the Republican ticket for mayor of New York.

If Koppell decides to challenge Klein things could get even messier in the Bronx as a number of Bronx electeds would be forced to decide whether they want to risk alienating Klein and lose the support of the head of the Senate or publically give Klein and the IDC their blessing.

Klein recently won the endorsement of Stuart Appelbaum, president of the Retail, Wholesale and Department Store Union (RWDSU), indicating that labor and progressives may be inclined to play it safe.

One Bronx insider said he expects most community activists and advocates in Klein's district to support him, "They can't risk alienating the guy who brings home the bacon. They might not like the guy but they aren't stupid."

Other electeds say that Koppell has been wavering back and forth on whether to run and it may be too late in the game to mount a credible challenge against the Senate's most prodigious fundraiser.

Both Klein and Rivera would certainly rather be traveling the state to work for other Democratic candidates this summer than slugging out a primary battle.

Rivera plays well in other districts as the passionate progressive young leader from the Bronx who defeated jailed former Sen. Pedro Espada.

While they would rather wage summertime proxy wars over control of the Senate, at the moment Klein and Rivera are facing the prospect of spending their summers in the Bronx trying to secure the votes of their own constituents.