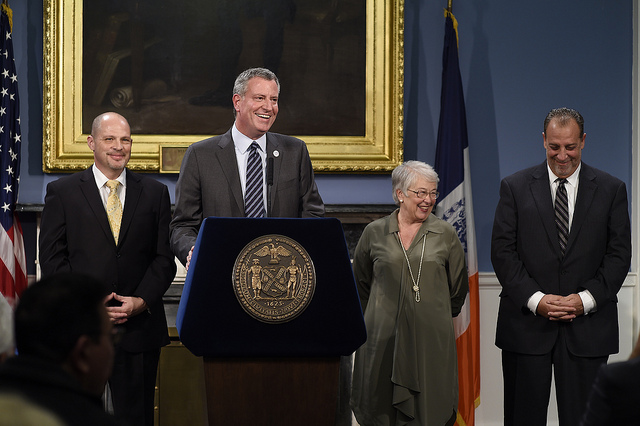 NEW YORK - Dating back to his time as a candidate, Mayor Bill de Blasio made one thing clear regarding retroactive pay to the city's roughly 150 municipal labor unions: find savings to pay for it, or it's off the table. He often mentioned healthcare costs, which have ballooned in recent years and, if left unchecked, are expected to top $7 billion by 2017.

With raises given, how did de Blasio come out on the healthcare savings to help pay for them?

The UFT and the City agreed to a series of cost-cutting measures that are projected to save a total of $3.4 billion over four years if adopted by all the city's municipal unions through ratification by the Municipal Labor Council (MLC), as required.

The details of the savings plan given at Thursday's City Hall press conference were extremely limited. Changes in the healthcare benefits must be ratified by the MLC because they would affect all labor unions (which are still in contract negotiations of their own). Other than generalities and flashy numbers, officials appeared cautious about releasing details of the healthcare changes since the MLC is expected to meet on Friday to discuss, and possibly ratify, the proposals.

"Working together, we identified significant healthcare cost savings, the kinds of savings that have been talked about for years, but never achieved until this group of individuals got together and found common ground," said Mayor de Blasio.

Multiple reporters asked for details as to what these measures would include, but the questions were largely dodged. Robert Linn, the City's director of labor relations, gave two examples of potential cost savers: having radiology and blood work done in a central location as opposed to a doctor's office, and purchasing prescription drugs through a single entity. UFT President Michael Mulgrew mentioned there would be a joint committee at the MLC that would come up with cost cutting measures in a transparent way.

One possible change noticeably missing is having workers contribute to paying their healthcare premiums, something fiscal watchdogs have been suggesting for years. Linn hinted that measure was not a part of the conversation: "We think there are menus that we have put together that don't involve shifting cost to employees and to provide much more efficient, effective healthcare."

The healthcare benefits New York City municipal workers enjoy is rare in that they do not pay any money toward their healthcare premiums. Only the city of Los Angeles offers a comparable benefit, according to a 2013 report from Citizens Budget Commission (CBC). By comparison, New York State workers have been contributing to their healthcare premiums since 1983 with the current rate being 10 percent for most single coverage employees and 25 percent for family coverage.

In addition, New York City retirees do not contribute to their healthcare costs and once retirees hit 65 and are eligible for Medicaid Part B, the City reimburses the cost 100 percent. No other municipality in the country offers either of these benefits, according to CBC.

Municipal workers contributing to their healthcare premiums would provide reliable cost savings to the city. The hodgepodge of measures the City has negotiated with the UFT, which appear to be bulk buying and saving methods, are less predictable.

"Pursuing cost control measures is a worthy effort, but the savings that will materialize from such an effort are unclear," Maria Doulis, cities studies director at CBC, said by email on Thursday. " More predictable savings are available by asking employees to contribute to the cost of health premiums; this would mirror the agreements virtually all other public and private employees have with their employers and would provide savings the City could bank on to help fund wage increases."

Linn all but guaranteed the programs would be a success. "We feel certain those targets are achievable and my guess is we will hit them, if not go beyond them," he said.

A Missed Opportunity?
De Blasio is in a unique position when negotiating these expired contracts. The unions, especially the UFT, want an enormous sum of retro pay. The City, which has watched healthcare costs eat up considerably larger portions of the budget year after year, needed to find ways to lower these costs - as de Blasio has repeatedly said.

"This was a time when they would have the most leverage to push something more dramatic," said Dan DiSalvo, a senior fellow at the Manhattan Institute and an assistant professor of political science at CUNY, by phone on Thursday.

If the City would have negotiated municipal workers contributing in line with State employees (10 percent for single coverage and 25 percent for families) the City would have saved $715 million in fiscal 2014, according to the CBC report. Although a jump that large was highly unlikely, the numbers exhibit the amount of savings possible with employees contributing to their healthcare costs.

"Even if the city had gotten the workers to pay a small amount on the premium side at least that would have crossed the threshold of having them pay anything," said DiSalvo. "That would have been a big step forward in terms of shifting the cost out of the city budget to more cost sharing with workers for their healthcare - especially if healthcare costs are rising."

DiSalvo argues cost cutting measures have not been shown to generate the type of long-term savings that employee contribution has.

"The amount of savings they say they are going to get and the policy levers they are pulling, at least so far as has been reported, just don't correspond," DiSalvo said. "What you end up with is a cosmetic concession that makes it look like the union is giving up stuff but these don't translate over the long term into real savings."

He continued, "Then costs rise over time and then you cycle back to the same set of things you are confronting."