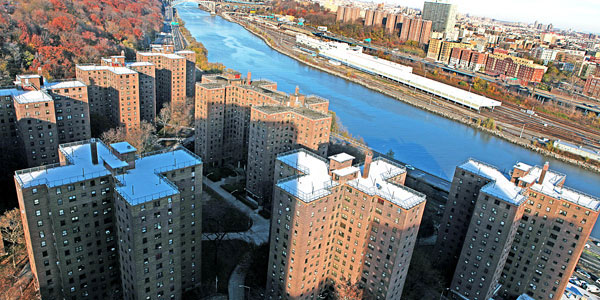 Every year, the staff of the Rent Guidelines Board (RGB) collects and analyzes volumes of data on housing affordability, incomes, and the expenses associated with operating housing in New York City. This work underlies faith in the power of this research and accompanying analysis to allow RGB members – representing landlords, tenants and the public – to determine how much rents should rise in about one million apartments in New York City.

This annual process, perhaps unsurprisingly, not only involves research and data analysis, but lots of shouting, ranting, predictions of apocalypse and the imminent end of the city as we know it.

This year is no different in that respect – there will be lots of shouting – but it is different in one crucial way: it looks like, for the first time since this process was developed in the late 1960s, the landlords will be complaining much more than the tenants. The Rent Guidelines Board appears poised to freeze rents for New York City's roughly one million rent-regulated apartments – the city's largest stock of affordable housing - for the first time since the RGB was established in 1969.

Why this historic possibility that is making tenants and tenant advocates nearly giddy? Well, the RGB's nine members are appointed by the mayor - and there's a new mayor in town; a mayor who ran on a platform of reducing inequality and protecting affordable housing, and who called for a rent freeze during his campaign.

Bill de Blasio has appointed six RGB members since taking office, including representatives for tenants, landlords, and the public, and many will be watching to see how those new members perform at the RGB meeting set for Monday night, May 5, at 6 p.m. at U.S. Customs House in Manhattan. At Monday night's meeting, the RGB will set preliminary guidelines leading up to a final vote on June 23. In the past the board has set an initial range for increases such as "2.5% to 4.5% for one-year leases and 4% to 7% for two-year leases."

Will the range start at zero this year?
Indications so far are auspicious for advocates seeking to make history: at its first meeting, the board's staff conceded that the price index of operating costs, which had long been a big part of justifying rent increases, is flawed. And, the board's schedule now shows that it will take public testimony at meetings in each of the city's boroughs in evening hours, when tenants are more apt to attend. This is a first in and of itself - in previous years, only one "outer borough" meeting was held during the process.

In recent weeks, the mayor appointed two public members, one landlord member and a board chair, Rachel Godsil. The public members and chairperson, by all accounts, appear more open to the call for a rent freeze, the promise for which clearly aligns with the mayor's focus on reducing economic inequality. Tenant members are, of course, all but certain to favor a freeze.

The housing stock
Rent stabilized apartments are in buildings of six or more units, generally built before 1974, that are not co-ops or condos. Easily more than two million New Yorkers live in these apartments - they comprise approximately 59% of rental apartments in the Bronx, 43% in Brooklyn, 45% in Manhattan, 42% in Queens, and 15% in Staten Island, according to the RGB.

These apartments are important not only because their rent can increase solely through the board's annual guidelines; these apartments fall under laws that guarantee tenure (landlords must renew their leases) and set strict rules on grounds for evictions. The laws also require services to be maintained and a state agency, the Division of Housing and Community Renewal (DHCR), has administrative processes to enforce these rules. How well DHCR does so is a topic of frequent debate among tenants and landlords.

The number of rent stabilized apartments has been falling for years - at minimum, landlords have convinced DHCR to deregulate more than 90,000 apartments; advocates estimate the number as high as 200,000 units.

Arguably, the bigger fight over these apartments is not around this year's RGB hearings - as historic as a rent freeze may be; instead, it may very well take place next year when the laws expire and must be renewed by the State. The laws will almost certainly be renewed but advocates are hoping they are renewed with rules that make it more difficult for landlords to deregulate apartments.

The process and the members
The nine-member Rent Guidelines Board holds several meetings to review the data and analysis its staff collects and collates, and to hear the views of landlords and tenants and the general public before it determines what to do with the rents. The board's approach has historically involved a three-step process: first, the board sets a range for the new rent guidelines, then it holds hearings and further analyzes data, and then, at its final and usually especially raucous meeting, votes to set the guidelines.

The board's nine members are appointed by the mayor and Bill de Blasio has appointed six since his election - to represent tenants, he renewed the term of tenant representative Harvey Epstein, associate director of the Urban Justice Center, which litigates on behalf of tenants, and appointed Sheila Garcia, a tenant organizer from the Bronx; to represent landlords, he appointed Sara Willard, a senior project manager at the Hudson Companies, which develops both market-rate and affordable housing, who joins Magda Cruz, a real estate attorney.

"It's not exactly the best job in city government," said Michael McKee of TenantsPAC, a statewide tenant lobby group that watches the proceedings carefully. "They get $100 a day to have people scream at them, the chair gets $125 a day. You have to ask yourself why would anyone want to do this - it's the classic thankless job."

A 'historic' rent freeze?
A rent freeze is not novel. In times of economic crisis in the city's history, state authorities have frozen rents – the last time that happened was 1950, and prior to that, 1943. A full history of the rent regulation system is available via the City's RGB site. Meanwhile, it is important to note that the state laws are not solely or even mostly about rent – in fact, as important as their instructions on rent, the rent regulation laws establish very important tenant protections.

But if it occurs this year, it would be the Rent Guidelines Board's first rent freeze since the board itself was established in 1969 under state law.

The reason is simple: the politics have changed. Finally, it appears, enough board members are sympathetic to the arguments put forth by tenant advocates: especially that the price index of operating costs is flawed and that tenant incomes have not increased enough to justify another hike.

The price index of operating costs is one key data point the board considers in its deliberations and has shown the costs of operating apartment buildings rising every year. The price index looks mostly at the changes in the prices landlords pay for the things needed to operate a building: oil, water, etc. It's similar to the federal consumer price index. But, advocates point out, it does not look at actual expenditures. Worse, they say, the index is one-sided - it only looks at expenditures but does not consider the profits landlords obtain from their buildings.

The RGB staff conceded problems with the price index at the board's first meeting this year. At the very least, the lead researcher said, the index is long out of date and has not been revised because doing so would cost about $200,000 in data collection and analysis.

But it comes down to politics
"The fundamental flaw of the process is that the board is usually dominated by pro-landlord appointees," said Moses Gates of the Association for Neighborhood Housing and Development, which is comprised of hundreds of groups across the city that work on housing affordability, among other things. "It's a political process.

"[But] it's a new day and there's a paradigm shift," Gates added. "That's why we had an election." Gates was referring, of course, to the election of Mayor de Blasio, who said as a candidate he supported a rent freeze. The mayor appears to be following up on his promise. The board ultimately reflects the mayor's wishes because he appoints its members.

"I'm excited to have a board that I think has some members on it who will actually follow the statute and consider not only landlords' profits but tenant incomes," said Ellen Davidson of Tenants and Neighbors, a large tenant advocacy organization. "That's something the previous board was completely uninterested in taking into consideration.

"The board over-compensated landlords so severely under Bloomberg – especially in 2009 and last year," McKee said. "[Landlords] knew that last year was their last chance for a big increase.

"Look," he went on, "some of the same landlords have been testifying at these meetings for 20 years saying they're going out of business, but one I know who has said that has only kept buying buildings."

In the same time, however, homelessness has only increased and now stands at record levels with more than 50,000 people in shelters, advocates point out.

"We've always talked about how tenants suffer - and how rent stabilization is the largest source of affordable housing in the city," Davidson said. "The board in the past has made sure profits go up and up and up while ignoring what's happening to tenants. It's been ignored by most politicians up to now."

Landlords, to be clear, beg to differ
"The bottom line is that you cannot operate housing without money," said Frank Ricci of the Rent Stabilization Association, the largest landlord's lobby group in the city and state. "Hopefully all of these new people on the board will understand that unless you have money you cannot operate buildings."

The operating costs include oil for the boiler or natural gas, insurance, water, a doorman's wages, repairs and, of course, taxes. Costs have increased dramatically this year, according to the RGB's price index of operating costs. The latest research by the RGB staff points to highly increased costs for landlords and has led to further dispute of a potential rent freeze, though the index to assess those costs is under question.

Housing in the city will suffer from a rent freeze, Ricci said. "Owners will do less maintenance and the number of buildings in tax arrears will increase," he said. "They'll throw up their hands and look for a way to get out of the business."