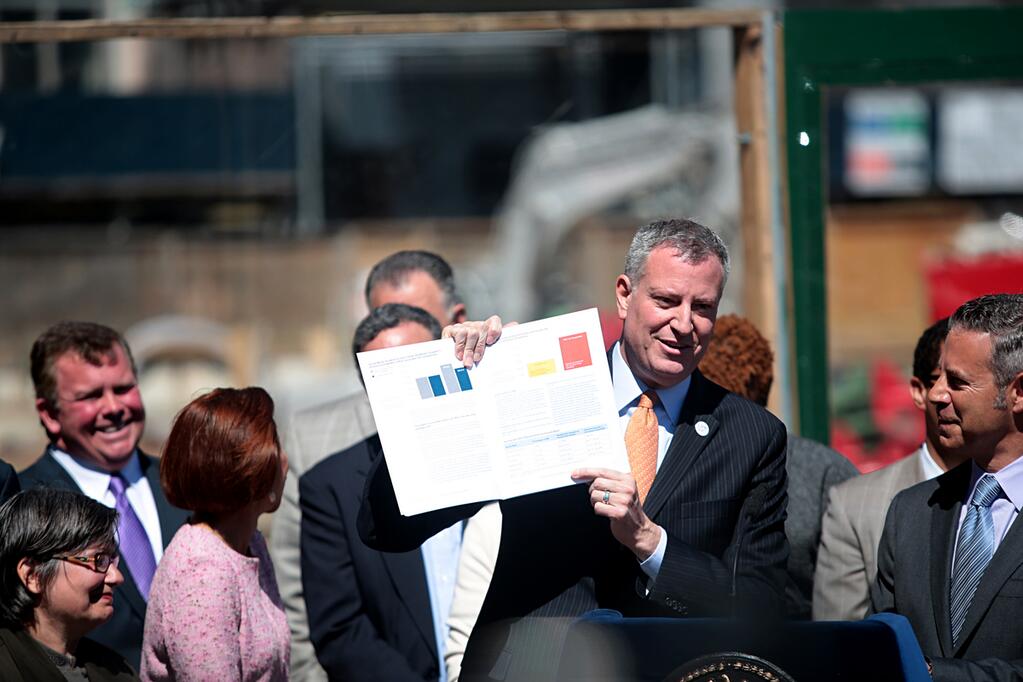 Housing built during de Blasio's 10-year timeframe aims to provide rent relief to today's New York City residents, but the buildings will be there long after de Blasio is mayor. In the next several decades climate change is projected to increase the severity of storms, and sea levels are projected to rise. The city's housing stock, newly built or preserved, will need to withstand all that Mother Nature throws at it.

The de Blasio housing plan, entitled "Housing New York" and outlined in a 115-page booklet, donates only four pages to environmental sustainability and resiliency, though the mayor has promised to prioritize these elements.

Following Superstorm Sandy, the Federal Emergency Management Agency (FEMA) updated their flood maps. The new, 2013 maps increase the size of the city's high-risk zones by more than 50 percent, according to de Blasio's housing plan. Despite the risk of flooding, and higher insurance premiums, the City will not shy away from building or preserving affordable housing in those areas.

Carl Weisbrod, chair of the City Planning Commission, said he believes if the City accords with sustainability and resiliency measures, "we should be able to build in almost all parts of the city." He added the only off-limit areas would be parts of Staten Island that participated in the State buyout program. Those parcels of land will be returned to their natural state per homeowner deals with the State.

Much of what was said Monday echoed what Daniel Zarrilli, director of the city's newly created Office of Recovery and Resiliency, recently told Gotham Gazette regarding the City's resiliency plans.

Meanwhile, FEMA allows for insurance breaks for homes that use mitigation measures such as elevating the home, or raising critical building systems like boilers and electrical boxes. But for many of the large buildings that make up the New York City housing stock, elevation is not possible. De Blasio's housing plan says, "we will advocate for Federal recognition of other forms of risk reduction other than elevating structures."

Without the relaxation of the Federal requirements, which are set to kick in during 2015, insurance premiums could make owning affordable rental units cost prohibitive.

The City will continue to expand coastal flood protection measures such as bulkheads, sand dunes, wetlands, and other physical structures in order to reduce the risk and damage of flooding.

The Future is Green
Energy costs have been a contributing factor to increased rents in recent years. Utility costs rose more than six percent between 2012 and 2013, with the cost of fuel oil rising 20 percent during the same period, according to the housing report. The rise in energy costs could continue to push rents higher and thus turn more currently affordable units unaffordable, particularly for low-income residents.

De Blasio's housing plan calls for a pilot outreach program aimed to slow rising utility costs. According to the plan, this program will include financial assistance of grants or loans to help speed up investment in energy and water efficiency. The loans could help bridge the monetary gap for the oil conservation plan that is already in place from work done by the prior administration.

Under former mayor Michael Bloomberg, the City passed laws banning No. 6 oil by July 1, 2015. Buildings using No. 6 have the option to convert to less dirty No. 2 oil or to natural gas. The conversion rate has been slow: barely more than half of the 10,000 buildings using No. 6 oil have converted, according to the New York Times. Cost was given as the biggest reason for not converting.

The de Blasio program will target housing that serves low-to-moderate income residents in the city's oldest and most vulnerable housing units. These efforts could reduce energy and water consumption by 30 percent.

"The plan's focus on retrofitting existing housing for energy and water savings is a win for both the environment and affordability," Marcia Bystryn, president of the New York League of Conservation Voters, said by email Monday.