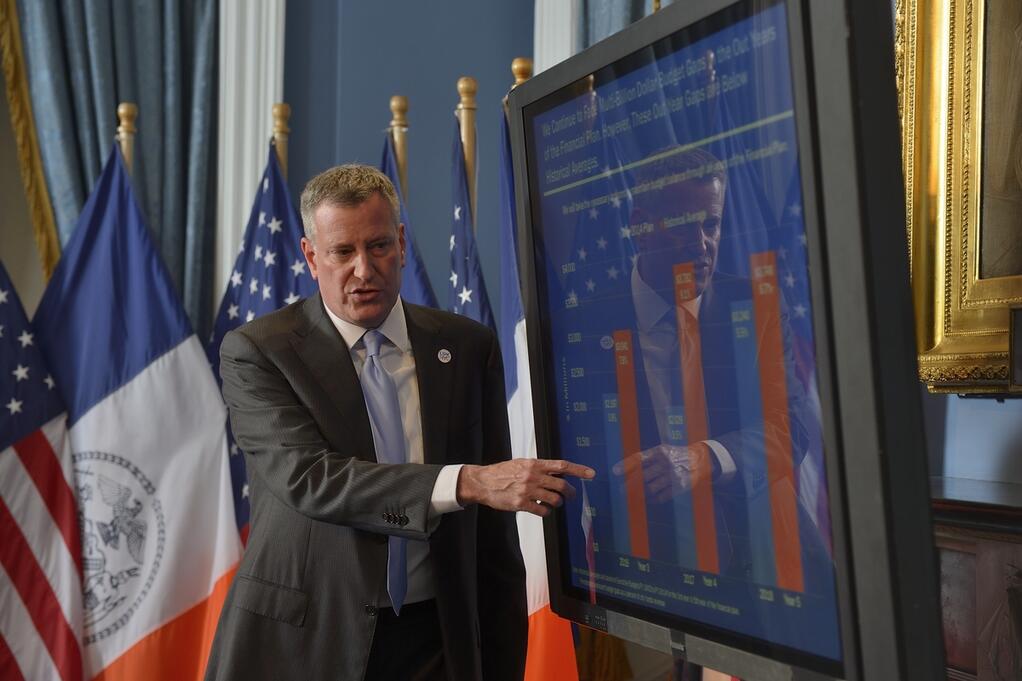 NEW YORK - Mayor Bill de Blasio released the first executive budget of his mayoralty on Thursday, May 8. The $73.9 billion, fiscal year 2015 budget sets a path for the de Blasio administration's vision of a progressive city with a focus on education, affordable housing, and infrastructure.

The document signifies another step toward the City Council and the mayor negotiating a final budget agreement by June 30. Between public hearings and closed-door meetings, the Council will spend the next six weeks trying to coax the mayor into funding particular additional initiatives its members deem necessary. The mayor will try to keep the city's budget balanced and fiscally responsible.

The annual game of cat and mouse had grown contentious in years past under former Mayor Michael Bloomberg. The yearly budget dance - where Bloomberg would cut money to 'vital' programs leaving the Council to fight to restore them - has ended under de Blasio, something council members have openly welcomed. The Council and the mayor share a similar progressive agenda, leaving less ground to cover to get to an agreement.

"It does not seem like it will be a contentious budget process," said Council Member Mark Weprin at City Hall on Thursday following a budget briefing with the mayor.

While there is a more open, working dialogue, the Council will continue to push for the items the mayor has yet to fund from its April 23 budget response.

"There are a lot of items out there that we have requested that are not in there yet, but that doesn't mean that by the end of June we won't see some more changes," Weprin said. "The negotiations are not over. This is still the middle of the process."

The mayor's executive budget shows a mixed bag of results on six key issues from the Council's wish list:

Transparency
For years council members have expressed frustration over the size of the units of appropriation in the budget. These units, the money allotted for particular budget line items, have been as large as several billion dollars (usually within the NYPD or Department of Education allocations). During the 2013 election season, several council members sent a letter to the mayoral candidates asking them to promise greater budget transparency. As a candidate, de Blasio never responded to the letter, but as mayor, he vowed to bring a greater level of transparency. That promise did not materialize in his executive budget, which did not go over well with the members.

"We are greatly concerned with the lack of transparency in units of appropriation in the Executive Budget," said Speaker Mark-Viverito in a statement. "Dividing funding for Universal Pre-Kindergarten, Elementary and Middle Schools and High Schools into smaller units of appropriation would increase accountability and transparency in a massive budget, making it easier to track categories of spending and ensure that all school funding is scheduled in the appropriate budget code."

"I was hoping there would be more detailed units of appropriation in this budget but there are not," Council Member Dan Garodnick, among the signees of last year's letter, said at City Hall May 8. "They have said they will improve, but have not yet done it."

De Blasio, when asked about the issue by Gotham Gazette on Thursday, countered by saying, "We will work with them on that. There is more to come on that as we move towards the adopted budget."

Fund 1,000 More NYPD Officers
In the Council's budget response, a request was made for funding to hire 1,000 new officers to support community policing, Vision Zero initiatives, and more. The estimated cost is $94.3 million for the first year and $97.9 million the second.

The mayor, as well as NYPD Commissioner Bill Bratton, came out against the proposal almost immediately, saying the current force headcount is fine, citing the continued drop in crime as evidence. The mayor did not fund more police in his executive budget.

"We think with the resources we have, we can keep crime low and continue to do better in terms of the Vision Zero program," de Blasio said, adding there were budget priorities elsewhere. "The fact is, thank God the NYPD is achieving what they are achieving with the resources they have now."

The mayor did put in $13 million for NYPD traffic enforcement to implement Vision Zero and added $110 million over the next three years to rehab two NYPD precinct buildings and construct a new 40th Precinct in the South Bronx.

Speaker Mark-Viverito, who has been a strong proponent of adding the additional police officers to the force, said in a statement, "We are disappointed to see that while the Executive Budget addresses skyrocketing overtime costs for the NYPD, it does not include funding to hire the additional 1,000 police officers needed to reduce understaffing at City precincts and provide support for Vision Zero."

While the mayor shows no sign of budging, the budget process is not over and the Council will keep pushing.

"While the proposed budget does not include funding for additional officers in local precincts, I remain hopeful that as we go through the budget process the administration will see the urgency of adding additional police to address the public safety needs of communities throughout the City," Council Member Vanessa Gibson, chair of the public safety committee, said in a statement.

Fund Universal Free School Lunch
To eliminate inequality in the school cafeteria, the Council, with support from Public Advocate Tish James, asked the mayor to make all public school lunches free. The Council estimated the program would cost the Department of Education $24 million, but would generate $60 million in additional State and Federal aid.

De Blasio did not include the initiative in his budget, but not because he doesn't agree with the idea. He said his team is examining whether or not initiating such a program would negatively impact the city's school funding as a whole.

"We are not convinced at this point that it won't unfortunately have the negative impact of reducing our federal funding substantially," de Blasio said. "Until we know if there may be a net negative in that, we have to be very careful."

Mark-Viverito said she was "distressed" the lunch fees were not waived in the budget. "Eliminating lunch fees are a simple, financially prudent way to address hunger in our City and ensure sure that every child can focus on learning," said Mark-Viverito in a statement.

Increase Funding for Anti-Gun Violence Initiatives
While the city as a whole has seen a dramatic decrease in crime in recent years, there are still neighborhoods with high incidents of gun violence. The Council asked the mayor to fund anti-gun violence programs to 10 additional communities, at a cost of $12 million.

The mayor did not fully meet the request, but did baseline $6 million - a first for the program.

"I think we need a little bit more to get there, but I am happy [the funding] was in there," Council Member Jumaane Williams, deputy leader and co-chair of the Task Force to Combat Gun Violence, said at City Hall May 8.

Williams said he is not only looking for funding, but hopes a change in philosophy in dealing with the problem will help. He wants to see more collaboration across multiple city agencies to combat gun violence on the ground including legal aid, job preparation, and help with mental health issues.

"We have to make sure we have a collaborative effort to get to the gun violence," Williams said. "Law enforcement is one aspect, but not the only aspect."

The mayor's budget put an additional $8.5 million in the Summer Youth Employment Program budget which will support a total of approximately 36,000 participants in 2015. It is worth noting these numbers are based on an assumption of federal funds. Since the federal budget has not been finalized, the funding could be less than expected, which may lead to fewer slots in the city program.

"Investing in the Summer Youth Employment Program is an investment in the futures of our young people," said Council Member Mathieu Eugene, chair of the Committee on Youth Services. "I hope the City continues to support this and other initiatives that give youth the opportunity to develop skills to succeed in life."

Increase Funding for Road Resurfacing
Through a particularly rough winter, potholes became a major issue in the city. The Council asked the mayor for an additional $53 million in fiscal year 2015 to allow the Department of Transportation to resurface 1,000 lane miles.

The mayor, calling himself an "outer borough motorist," has expressed empathy for city drivers, and provided $49 million in additional capital funding for road resurfacing. When completed, it should bring 1,000 lane miles into a state of good repair. De Blasio also added an additional $346 million for bridge rehabilitation.

"It is no secret that our City's underground infrastructure is aging, and that roads that protect those utilities have been badly battered by a harsh winter," said Council Member Daniel R. Garodnick in a statement. "These funds are an important investment toward keeping our roads in good repair, and, significantly, protecting our gas pipes, water mains, and electrical wiring underground.