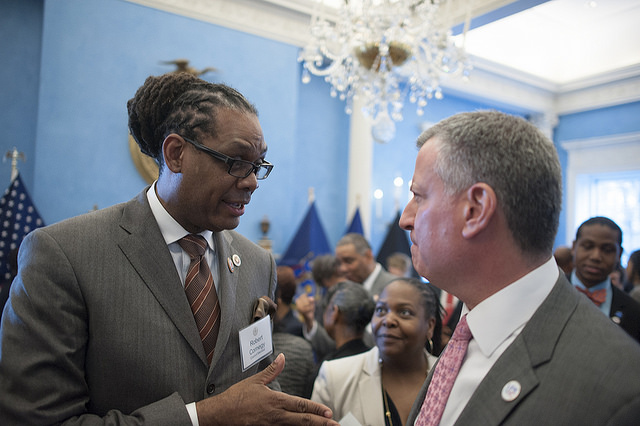 A few months into his first term as a member of the New York City Council, Brooklyn's Robert Cornegy Jr. has tapped into his experience in city government and community activism to embrace his role as chair of the Council's small business committee and pursue legislation to help those in his district and around the city. Recently, the council member, who represents Brooklyn's Bedford-Stuyvesant and Crown Heights neighborhoods, sat down with Gotham Gazette to discuss a wide range of issues, including two new pieces of legislation he has introduced to the Council, his role as committee chair, gentrification, public safety, and more.

Here, in the fifth and final part of the interview (see below for links to parts 1-4), Cornegy discusses his take on NYPD commissioner Bill Bratton, police-community relations, and policing of public housing with Gotham Gazette's executive editor Ben Max:

And in the fourth segment of our interview, CM Cornegy discusses his public lactation station, what it means to be progressive, and the issue of gentrification in his district and beyond.

[Related: See our video interview with Public Advocate Letitia James on a wide range of topics including her efforts to push more women into politics]
***
Video production generously donated to Gotham Gazette by GZIPUSA.HumanityCode.com