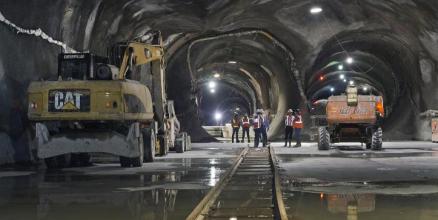 The terms "capital project" and "over budget" go together like peanut butter and jelly. Ask city agencies in charge of these projects why they consistently cost more than expected and the laundry list of excuses begins: we didn't anticipate this, we didn't expect that. The excuses are likely the reality, but they don't address the broader issue: telling the truth from the beginning is much harder than making excuses after the fact.

"When you start looking at [projects like] East Side Access, a Kosciuszko Bridge, there is an initial fear that if we put a project out that is going to cost $10 billion, that it will never happen."

So government agencies across the country, including the MTA and the New York State DOT, have historically projected smaller numbers publicly and asked for forgiveness later because, as McDonald points out, there is virtually nothing anyone can do about it once the project starts.

"Once you start a project, you don't stop it," McDonald said. "So there has never been any real negative for cost overruns, because you are going to build the project."

No one wants to see billions invested in a project that only gets half built. The incomplete project would be unusable, leaving the initial investment wasted. Once initial budget projections are hit, the only option becomes to continue to dump more money in, regardless of how upsetting it is to the public or how much debt is incurred.

One person familiar with this process is Tom Prendergast, chairman and CEO of the MTA. His agency is responsible for two over-budget and late projects. The East Side Access project, which will connect the Long Island Railroad to a new East Side station and incorporate Grand Central Station, was scheduled to be complete in 2009 at a cost of $4.3 billion. It is now estimated to be complete in 2021 and will cost roughly $10 billion. It is currently the largest infrastructure project in the country.

The Fulton Street Center, which will connect 11 subway lines at Fulton Street and Broadway in Lower Manhattan, is currently five years behind schedule (though slated to open June 26) and millions over budget.

"Fulton and East Side Access are projects over $1B," Prendergast said at the City and State forum on Thursday. "[Managing those] is not a core competency of the MTA and its capacity. It has gotten better at it."

Prendergast was the president of the Long Island Railroad at the time the project was originally approved, but as head of the MTA now, he is having to deal with the headache of the cost overruns.

For the East Side Access project, Prendergast blamed the tunneling for the excess time and money.

"I think we underestimated the amount of tunneling and mining that was done," Prendergast said. "If you actually go down to the caverns and see how much earth that has been moved, we totally underestimated that. Yet, we have to finish that project."

For the Fulton Center project, which is in at just over $1 billion, Prendergast was less detailed: "I think in some ways, the eyes were bigger than the stomach."

As federal funding has become more scarce in recent years, there has been a greater focus on front-end planning to prevent going over budget. McDonald said the State has recently instituted accountability measures into all State DOT projects. If the estimates tip to 5 percent over budget, a corrective plan must be issued.

McDonald cited the Alexander Hamilton Bridge as an example. The $400 million project, which began in the spring of 2009, is slated to be complete under budget and on time, according to McDonald.

Better managing the front end of a $400 million project is far easier than a multi-billion project, however, and Prendergast acknowledged the MTA will have to do better.

"We need to manage those projects better," Prendergast said. "We can't afford to waste billions of dollars."