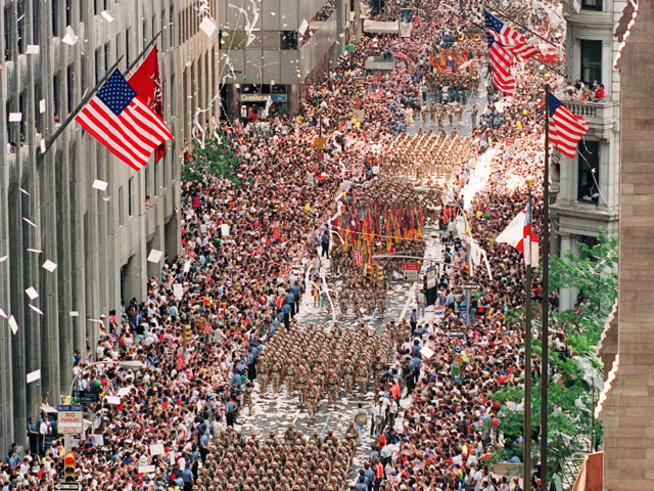 The push for a ticker-tape parade for the veterans of the Iraq and Afghanistan Wars continues to gain momentum among elected officials in New York City. At its May 29 Stated meeting the City Council passed a resolution in support of a parade. This followed an April 13 announcement by Sen. Charles Schumer who said the City should "kick off a campaign" for a welcome home parade for troops that served in Iraq and Afghanistan.

Unfortunately, the parade will likely have to wait until next year.

On May 27, President Barack Obama announced the United States would end the combat mission in Afghanistan by the end of this year and reduce the number of troops in the country from 32,000 to 9,800 by the beginning of 2015.

"Together with our allies and the Afghan government, we have agreed that this is the year we will conclude our combat mission in Afghanistan," President Obama said from the Rose Garden of the White House on May 27.

The announcement, while good news to those serving abroad as well as their families, does put a kink in the parade plans. Historically, New York City ticker-tape parades following wars are not thrown until the President declares the conflict over and the majority of the troops have come home. The President did not give a specific date for the end of combat, only saying "by the end of the year."

Vincent McGowan, President of the United War Veterans Council of New York County (UWVC), who stood with Sen. Schumer during his April announcement, proposed having the parade on this Nov. 11, Veterans Day, at a city council hearing on May 23. With all of the troops not likely to be home by then, though, McGowan does not appear hopeful the parade will happen this fall.

"I think after [the president's] comments, it is pretty clear to say that it will not be this November," McGowan said by phone May 29. "We would not have a welcome home [parade] until the president has declared a secession of hostilities."

He added, "The plan is to follow, not lead, the country into respecting the service members, which would require the President to make that statement."

When that statement will be made is unclear at this point. The nature of the conflict, especially how it will end, is significantly different from wars past - something the President eluded to in his Rose Garden speech.

"This is how wars end in the 21st century - not through signing ceremonies, but through decisive blows against our adversaries, transitions to elected governments, security forces who take the lead and ultimately full responsibility," Obama said May 27.

The Department of Defense (DOD) refused to answer specific questions regarding the parade, including if all the troops would need to be home before it could move forward.

"We appreciate the senator's desire to honor our Iraq and Afghanistan veterans and are reviewing his proposal," Lt. Cmdr. Nate Christensen, a DOD Spokesman, said by email May 30.

McGowan said UWVC would coordinate among the military, DOD, the President's office, New York City and State officials, as well as any any other state or organization that wished to participate.

"An uncoordinated event would be a disaster and be disrespectful," McGowan said.

He has a meeting with DOD later this month.

A Parade Committee
Regardless of when the parade happens, funds will need to be raised to pay for it. The nature of that process is yet to be determined, however McGowan said he would anticipate a commission would be formed, as it was in 1991.

New York City hosted it's last ticker-tape welcome home parade for troops returning from the First Gulf War in June of 1991. To facilitate the fundraising, Mayor David Dinkins appointed Joseph Flom, a lawyer who was the lead organizer of the city's bicentennial celebration, and Michael Duval, an investment banker and member of the Defense Policy Board of the Department of Defense, to co-chair a commission in March of 1991.

The City donated half a floor of office space at 346 Broadway, according to Robert Green, commissioner of the Mayor's Office of Veteran Affairs in 1991 and a member of the commission.

The commission set a fundraising goal of $5 million to cover the cost of the parade, as well as reimburse the City for police and sanitation costs (this was required because of tough fiscal times the City was facing at the time).

As of June 1, Mayor de Blasio has not appointed a commission, although he has lent his support for the parade idea. Gotham Gazette asked the mayor's office if Mayor de Blasio will be forming a commission for an Iraq and Afghanistan Wars parade. A spokesperson said the administration looks forward to working with the federal delegation on a parade, but provided no comment on a commission.

"I would like to see a commission or a parade committee representative of all the VSOs (veteran service organizations) and all the groups that are so supportive of veterans issues," Council Member Eric Ulrich, chair of the Council's veterans committee, said May 29. "I don't want to see this being run by one person or one group. I want to see this as a reflection of the veterans community."

There has been strong support for the parade dating back to 2012, and fundraising could exceed the funds needed to pull the parade off, as it did in 1991. At that time, the commission set up what they called a "living memorial," according to Peter Kohlmann, who was also on the commission and helped organized the parade.

Kohlmann said the organizers wanted to ensure long-term assistance to veterans with any money raised that exceeded the cost of the parade. The commission accepted proposals for what to do with the additional money and eventually it was decided a donation would be made to United Way to help homeless veterans, according to Kohlmann. This allowed the money to go to a worthy cause, but the commission (which was disbanded following the parade), would not be responsible for running a program.

"I think it is a good example and a good thing to do," McGowan said. "I think it would help with the fundraising if there was a social benefit rather than just a celebratory event involved."

McGowan did not name a specific program he would like to see the funds go toward, but did note there are many more service women than in wars past. He said he wanted that taken into consideration when deciding on a program or organization to donate money to.

Council Member Ulrich said he anticipates the parade will raise more money than is needed and agrees it should go to a longer-term program.

"If more money was raised than needed to put on the event then I would like to see that money go towards scholarships for...families of fallen troops," Ulrich said.