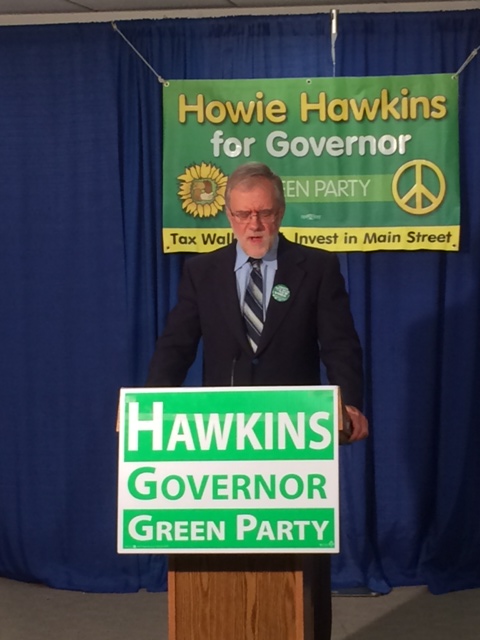 Albany - Green Party gubernatorial candidate Howie Hawkins came to Albany last week to declare his belief that thanks to the divisive nature of the Working Families Party's endorsement of Gov. Andrew Cuomo he has become the go-to candidate for progressives and union members disenfranchised by Cuomo's centrist politics.

Running on the Green Party line, Hawkins had surprise success in the 2010 gubernatorial race when he used frustration over the financial crisis and a "Green New Deal" that promised jobs for every New Yorker to win almost 60,000 votes.

"We have a real shot to win this," Hawkins said in interview at the capitol last week. First, Hawkins is slowly but surely presenting himself to the state's union members who have felt attacked by Cuomo's austerity measures.

Four years ago, Cuomo campaigned on cutting benefits and costs of the state workforce. Since being elected he has followed through, driving hard bargains, cutting pensions, freezing wages, and increasing the amount employees must contribute to their health care costs. Among many upset state employees, public teachers unions have perhaps the largest chip on their shoulder - they are upset about the state's implementation of Common Core and Cuomo's resistance to increasing school funding and strong support of charter schools.

As part of his plan to harness labor support, Hawkins is betting that the state AFL-CIO will not endorse in the governor's race. In 2010, reps of the New York State United Teachers and Civil Service Employee Association walked out of the room when it was time to endorse, protesting Cuomo's nomination - their absence allowed the AFL-CIO to reach the two-thirds majority it requires for an endorsement. But if the two groups stay this year it is unlikely Cuomo will get the nod. That will then free up regional labor councils across the state to make their own endorsements. It may be a long shot, but Hawkins is betting enough union members are open to making a protest vote.

And the WFP's decision to back Cuomo has drawn more than just media attention to Hawkins' campaign. The endorsement ignited a spike in donations, donations with notes of encouragement from "former WFP members," Hawkins said. His campaign has tossed all their initial fundraising projections out the window.

The WFP was divided between rank and file advocates who wanted to endorse anyone over Cuomo to show their disgust at what they see as pro-charter school, pro-business and anti-labor initiatives, and labor heads, who fund the party and fought to stay in Cuomo's good graces.

Jilted WFP activists took to social media that Saturday night in May when the WFP officially endorsed Cuomo, with a number pointing to Hawkins as their only remaining option. Hawkins wasn't looking to go to war with the WFP - on the contrary, he looked to meet with WFP leaders on how to defeat Cuomo, but his advances were ignored. Even now Hawkins says he can help the WFP hold Cuomo to his word and win the state Senate for Democrats. "If I'm not in this race progressives are going to stay home," says Hawkins. "I'm happy to talk to candidates and the WFP about how we can work together so that progressives show up to vote for me and Democratic Senate candidates."

Hawkins hopes have been bolstered by the two polls that put the Working Families Party in a position to bargain with Cuomo for its endorsement - a Siena Poll and a Quinnipiac Poll both found that an unnamed Working Families Party candidate would cut into Cuomo's vote total by about 20 points. Now that the WFP has given Cuomo their line, Hawkins thinks voters will still be looking for a progressive alternative to the centrist governor: "I'm a working guy. I'm a teamster with a name," Hawkins is fond of saying.

Hawkins may now have a better shot at being Governor of New York than he did last week, but that doesn't mean his days start any easier. Last Wednesday, Hawkins made his long drive into Albany from Syracuse through New York City, where he had a fundraiser. Unrecognized and unregarded by passers-by, the simple process of ordering breakfast at the Capitol's new Dunkin' Donuts turned into a debacle for Hawkins as his veggie breakfast sandwich was forgotten as other customers who had been behind him in line received their orders first. Finally, when Hawkins had his coffee and breakfast in hand, more frustration: his face shot into a grimace as he took a sip from the white styrofoam cup, "I ordered black and its full of this sweet stuff," he said pulling off the lid to reveal a white mixture. There was no assistant, no campaign staff there to fix the gubernatorial candidate's order.

Nothing about this race will be easy for Hawkins, especially given that he still holds down his night job in Syracuse where he unloads trucks for UPS. He is excited, though, that this year his campaign has around $30-$45,000 to work with, money he will have to use wisely as his opponents can afford to plaster ads on primetime television.

Other than the hope that a significant number of progressives are free agents in search of a candidate, Hawkins also has going for him his relative success in 2010, when he was one of a coterie of gubernatorial wannabes included in televised debates.

Cuomo appeared on stage with the at-times unhinged Republican challenger and Tea Party enthusiast Carl Paladino, leftist New York City Council Member Charles Barron of the Freedom Party, Libertarian Warren Redlich, glove-wearing Jimmy McMillan of the Rent is Too Damn High Party, and Kristin Davis of the Anti-Prohibition Party, whose only claim to fame was that she was allegedly madame to former Gov. Eliot Spitzer.

During those debates, Hawkins, who comes across as folksy, even a little bit out of time with his Southern accent, managed to deliver poised answers about his "Green New Deal," decried Wall Street, and promised every New Yorker the right to a job - messages that resonated two years deep into the fiscal crisis. Hawkins ended up with 60,000 votes and secured the Green Party its ballot line.

Hawkins says he has studied where those 60,000 votes came from and has a plan to capitalize on the frustration and resentment many state labor groups feel toward Cuomo for his hard bargains and cuts to benefits and compensation. On top of that, Hawkins asserts he will be the logical vote for Democrats and progressives who are frustrated with Cuomo's dalliances with Republicans and conservative fiscal policies.

So far Hawkins has modest endorsements from Bad Ass Teachers, which claims to be made of "nearly" 2,000 parents and educators who stand against the common core and what they see as the privatization of public education, and from United Opt Out, a national group that is opposed to the common core.

"They've suffered under his cuts now," Hawkins said of state employees, "and I think more of them are going to be with me."

Hawkins has met with a number of labor councils and expects to be endorsed by some. Major unions have included Hawkins in their news briefs and appear willing to keep members apprised of his campaign, something that wasn't true in 2010.

It may sound hopeful on Hawkins' part, but a number of Albany County legislators and union members confirm that there is a growing sense among public employee union members that the only way to send a message to Cuomo is to vote Hawkins. "I think right now that feeling is concentrated with the insiders, but the frustration continues and I think it can only grow," said one legislator who asked to remain anonymous.

Mark Dunlea, executive director of Hunger Action NY and regular Cuomo critic, said that Hawkins is already ahead of where he was at this time four years ago. "He's already gotten more media coverage than he did during the entire election cycle in 2010," said Dunlea. "There is really an opening for him there with labor."

So what exactly would Hawkins do if he was governor? His progressive platform includes that backing a $15 minimum wage, ending the state's rebate of the stock transfer tax to Wall Street firms, providing municipalities with 8 percent assistance as opposed to the 1 percent they currently receive, banning hydrofracking, beefing up the state's Department of Environmental Conservation, and pushing full public financing of electoral campaigns.

All of those stances are likely to alienate conservatives and many moderates, but Hawkins does have one position that may appeal to some on the right.

"The SAFE Act was rushed through out of political expediency," says Hawkins. "There was no thought put into it." Hawkins, whose father taught him to hunt, says he hasn't picked up a firearm since "I put down my M-16 and left the Marine Corp," but that he understands the complaints of community members who say that aspects of the SAFE Act simply don't make sense, like the seemingly arbitrary limit on magazine size and restrictions on inheriting firearms.

Hawkins hopes to put together a grassroots campaign that focuses on his credentials as a progressive; he plans to open a field office in New York City soon. Hawkins notes that Cuomo has spent the last month in New York City, often by the side of the state's most popular progressive, Mayor Bill de Blasio. "People know he's not a progressive. He isn't fooling anyone," Hawkins says of Cuomo. "I've been approached by a lot of liberals who voted for Cuomo on the WFP line last time as a protest vote and tell me they aren't going to make the same mistake. What good did it do them?"

In the end, though, it isn't just Cuomo's and Astorino's money that Hawkins is up against. If the Cuomo camp perceives Hawkins as having the possibility to significantly cut into the governor's vote total the gloves will likely come off. The Cuomo camp has been aggressively dropping opposition research on Republican candidate Rob Astorino since early this year and began to do so to Zephyr Teachout, who challenged Cuomo for the WFP line. Hawkins could be next.

Hawkins says he isn't worried about getting roughed up politically: "I don't know what they could do to me. I've got a job in the private sector. I don't got a lot of money. I'm a working class guy and we don't got much to lose. So if they think I'm enough of a threat to go after me, thats a good thing."