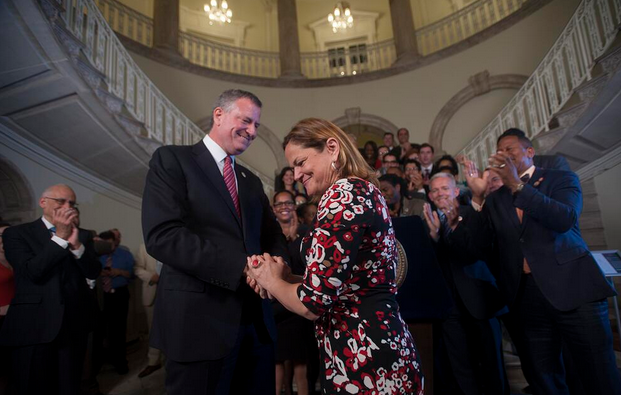 In its April preliminary budget response, the Council had asked Mayor Bill de Blasio to increase the budget of the Mayor's Office of Veterans Affairs by $400,000 and to allocate an additional $1 million toward veterans support services. De Blasio, who has voiced his support for veterans, did not add any additional funding, leaving the Council to use its own money.

When asked on Tuesday afternoon about the lack of funding, the mayor said, "We are evaluating how to proceed on veterans issues. It's very personal to me, as you know, and this country has not done enough for our veterans, particularly our wounded veterans." The mayor's father served in the American army during World War II, losing a leg in the Battle of Okinawa.

De Blasio continued, "We're going to be looking at a series of things we can do, we'll have announcements on that coming up."

Not waiting on further news from the mayor's office, the Council finalized its fiscal year 2015 funding plan. In addition to the general Council funds, council members individually allocated a total of $150,000 of discretionary funding to veterans causes ranging from homeless veterans services to funding for the Memorial Day parade, according to an analysis by Gotham Gazette.

Eric Ulrich, chair of the Veterans Committee, is funding two veterans organizations with $8,500.