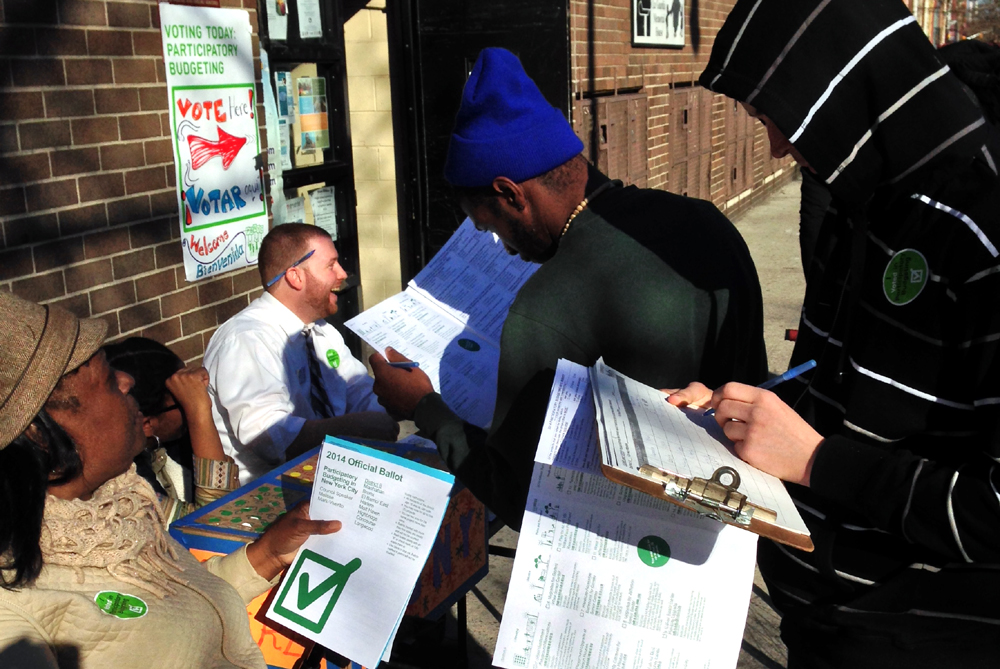 On Wednesday morning at 10:30, City Council Speaker Melissa Mark-Viverito, other council members, and advocates will gather in City Hall's red room to announce the expansion of participatory budgeting to at least 20 council districts.

Participatory budgeting, now entering its fourth year in New York City, will see implementation double, up from ten council districts the previous cycle, eight the second year, and four the initial year. This rapid increase in city electeds allocating $1-2 million in capital funding to community decision-making reflects the successes council members have seen in directly engaging their constituents in the budgeting process and empowering them to take ownership of bettering their communities.

The recently passed New York City municipal ID law, set to go into effect in 2015, is another effort, along with participatory budgeting (PB), to bring more New Yorkers into civic life. The ID law could even prove to be a boon to PB involvement among community members previously hesitant to register with government entities. All district residents 16 years and older can take part in the PB process where it is being implemented, which with this year's expansion nears half the city's 51 council districts.

PB allows district constituents to propose projects and vote on how to spend roughly $1 million in discretionary funds to improve their communities. Participants need not be registered New York voters or U.S. citizens, and advocates say PB has brought many more New Yorkers into community involvement.

While the official list of council members implementing PB will not be released until Wednesday morning, several participating council members have begun holding initial information sessions in their communities and Gotham Gazette has confirmed at least 20 council members who have committed to the program for fiscal year 2015, which just began on July 1.

And, though no official report on the efficacy of PB over its first three years in New York has yet been offered, the Urban Justice Center and the Participatory Budgeting Project, the not-for-profit organization that helps facilitate the PB process, released a report on year two of PB in New York that evaluated engagement and impact.

Then, while the FY2014 PB process was happening, so were the 2013 city elections. Nine council members originally committed to PB in FY2014, with eight of them seeing the process through, and Carlos Menchaca taking over for Sara Gonzalez in council district 38 after he defeated the incumbent in the Democratic primary and went on to take the seat. Menchaca was one of many candidates in 2013 who pledged to PBNYC that they would implement the program if (re)elected.

Newly elected Council Member Ben Kallos, who had also made such a pledge, joined the nine other districts with his own truncated PB process after taking office in January of 2014, making for ten total participating districts in FY2014.

Four other council members had pledged to The Participatory Budgeting Project that they would participate. The names of Council Members Chaim Deutsch, Inez Barron, Dan Garodnick and Laurie Cumbo were listed in a September press release from PBNYC, the Project's NYC branch. Inquiries to the offices of the Council Members Deutsch, Barron, and Cumbo have not been returned.

More clarity will be gained on Wednesday morning. There is, of course, the possibility that more than 20 council members will be implementing PB in FY2015. A higher number is more likely if Speaker Mark-Viverito has decided to dedicate greater council staff and/or funds to support PB. The speaker's office did not return multiple requests for comment.

The PB Process & Increased Community Input
PB's growth can largely be attributed to Mark-Viverito's early involvement, the community groups involved with PB, and the successes seen in the neighborhoods in which PB has been implemented. While PB funds are for capital work only and can often go to seemingly mundane projects, those chosen often relate directly to neighborhood quality of life issues. Over the past two years in New York City, PB has led to funding for expanded sidewalks for pedestrians, increased security in libraries, computers for schools, and much more.

"We've seen projects that get implemented in areas where there's higher need in the community compared to in the past when it was just the council member deciding on their own," Jennings said in an interview.

In 2013, Brooklyn Council Member Brad Lander (D-39) oversaw the repaving of pothole-plagued 50th Street between Fort Hamilton Parkway and 13th Avenue. The project, costing $150,000 and greatly easing traffic on the congested roadway, was entirely initiated by constituents through the PB process and completed just over a year after it was chosen for funding. Lander is one of the only council members with a dedicated web page to tracking approved projects in his district.

After a council member decides that his or her district will be home to PB and sets aside $1-2 million in capital funds to do so, the PB process has four stages that take months of planning and dedication from the community - and the council member's staff.

Information sessions for PB start in the summer, almost immediately after a new budget is passed. Here council members spread the word and educate constituents about the process. Newly-elected Council Member Johnson, representing District 3 in Manhattan, and incumbent Council Member Van Bramer, of District 26 in Queens, are two of the many council members that have already begun holding information sessions.

District residents then come together in the fall to brainstorm ideas for capital projects that will help their communities. Capital projects are intended to better the district's infrastructure and make it a better place to live. Projects can range from park renovations to new handicap-accessible ramps to updated technology in schools.

Next, brainstormed ideas are developed and defined by cost estimates, timelines, and projections. Steering committees, made up of constituents, guide this research and compilation process. Then the projects go to a vote.

The top projects get funded - with the number of winning projects varying. Projects become earmarked within the council members' discretionary funds in the completed budget that the mayor signs into law for the following the fiscal year.

The Participatory Budgeting Project and Community Voices Heard (CVH), a grassroots community development group, come together to provide structure for the process that spans almost the entire fiscal year. The two groups conduct outreach to get residents involved, and provide materials to take the creative process through the stages.

Sondra Youdelman, Executive Director of CVH, lauds how PB creates new space for all residents to engage in the budgeting process, especially groups that have typically been marginalized.

"Relationships across constituents and residents in communities that may never interact with one another start to get built across boundaries of neighborhoods, across boundaries that are traditionally established of class, of race, of culture...and people come together for the greater good of the community," Youdelman said in an interview.

According to PBNYC, in 2014 nearly 17,000 people came out to vote on how to spend approximately $14 million in discretionary funds allocated by their council members.

However, there are inherent challenges to eliciting engagement and ensuring projects enhance communities to help the most people, and help those that are most in need, Youdelman said. It can be a question of whether to pursue, for example, more streetlights and security in NYCHA developments or new turf fields at high schools. Like any other democratic process, these decisions can come down to get out the vote efforts.

Finite staff and resources limit the capacity of nonprofit organizations, but constituent steering committees are coming up with creative ways to tackle these challenges.

"Almost like the spicy spectrum on a menu where you have an extra logo that says 'Hey, look this is a spicy thing,'" the ballot might begin to highlight projects "that really advance equity in the neighborhood, allowing individuals to decide whether they want to choose that or not," Youdelman said.

Mark-Viverito, a pioneer of PB in 2011, is now in the position of leadership where she can dedicate greater resources for PB along the lines of central staffing and accountability measures.

Tracking PB Progress
While a list of funded projects is available to the public on the PBNYC website, a clear, systematic tracking system for the status of projects does not exist. Certain council members, such as Lander, have chosen to post results on their own web pages, indicating where in the process approved projects may be.

The delayed gratification here can be challenging, Youdelman said. "It can be hard because there's a lag time between when you make a decision and when you start seeing the results," she said.

But once constituents see projects come to life, she said, it "inspires people to both understand and respect what the city government and the public sector really bring to our communities."

Note: This article has been corrected to state that Council Member Garodnick is not participating in PB, it orgininally stated that he was participating.