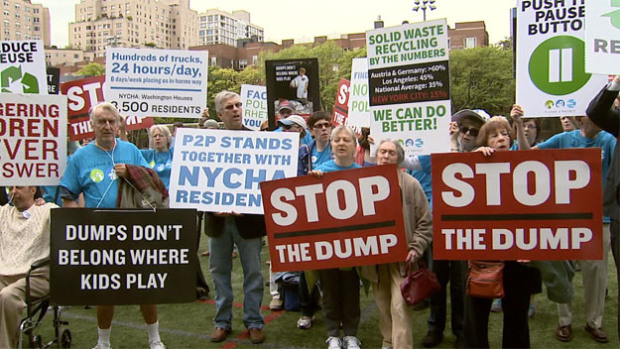 Protestors against the opening of a marine transfer station on the Upper East Side (photo: CBS 2)

While residents of the Upper East Side continue to fight the opening of a rebuilt Marine Transfer Station that would handle some of the island's waste, the true cost of New York City's trash output steadily grows.

Is the 91st Street Marine Transfer Station the beginning of a new paradigm, in which the collective burden of processing our waste is handled more equitably and sustainably, or is it a "hollow symbol" of a city strategy that doesn't address the underlying problem of too much trash?

No matter your view of the transfer station, though, one thing is clear: New York City's day-to-day approach to trash – shipping most of it elsewhere - is not fundamentally sustainable.

"We're not where we need to be," agreed City Council Member Antonio Reynoso, referring to the city's long-term approach to waste. But Reynoso, who represents North Brooklyn and chairs the Council's Committee on Sanitation and Solid Waste Management, maintained that the new transfer station would make the existing system "more efficient."

Reynoso said the City was moving in the right direction by shifting from trucks to barges, and establishing transfer stations in every borough. "We want to give every community the best [transfer] facility we possibly can," he added.

20,000 Tons Per Day
New York City generates 10,000 tons of residential waste and a comparable amount or greater of commercial waste every day. Manhattan's residential waste is trucked daily by the city's Department of Sanitation to an incineration plant in Newark, which converts trash into energy. The island's commercial waste is taken by private carters, both directly to New Jersey, and to waste transfer stations in the other boroughs for shipment to out-of-state landfills.

While converting Manhattan's residential trash to energy is arguably better than burying it, there are real costs associated with the practice. Kim Gaddy, a Newark resident and community organizer with Clean Water Action, described being on the receiving end of Manhattan's garbage as "a nightmare." "We have been fighting the Covanta [the plant's operators] facility for 20 years," she said.

Gaddy said that Covanta has finally agreed to install new filtration technology for the plant's boilers after a long campaign by local residents. Elevated child asthma rates in Newark are due to emissions from the Covanta plant and others like it, she said, and compounded by trucks delivering trash from New York City.

A Better Plan?
The hard-fought Solid Waste Management Plan of 2006 was supposed to address some of the most egregious irrationalities of New York City's waste management system, especially the way in which trash is moved and consolidated within the city. The plan may also provide some indirect relief for residents of Newark by re-routing some of Manhattan's residential trash flow to other locations.

After the 2000 closure of the Fresh Kills Landfill on Staten Island, the city had no place to take its trash aside from other locales throughout the U.S. The city's residential waste – excluding Manhattan's - and much of its commercial waste is delivered by truck to waste transfer stations, which are concentrated in a handful of New York City neighborhoods, particularly the area around Newtown Creek in Brooklyn and Queens, and the South Bronx.

There, trash is transferred to tractor-trailers and taken to landfills in upstate New York, Pennsylvania, Ohio, and other states. And it's not cheap. New York City taxpayers spend over $330 million annually in landfill costs. Trucking the trash out of New York City every day, and the out-of-state landfills themselves, also impose costs on the broader natural environment.

And there are local public health costs. Almost two-thirds of the city's waste transfer stations are located in the Newtown Creek area and the South Bronx, say environmental justice advocates. Both areas have higher than average hospitalization and death rates linked to air pollution.

Establishing a More Equitable System
The basic philosophy behind the Solid Waste Management Plan is to establish a more equitable -and less impactful- waste processing system, with infrastructure in every borough. Not surprisingly, communities targeted for new and/or upgraded waste infrastructure facilities are responding with bitter opposition.

Opponents to the 91st St Marine Transfer Station say that, besides taking DSNY trucks off the road, the station will not contribute to a more environmentally sustainable waste management system in New York City. "It [the transfer station] harms residents," said Council Member Ben Kallos, who represents the area.

"Instead of being located in an industrial area, it is being placed...between an Olympic training ground serving 30,000 children from all five boroughs and a public housing development with 1,173 units, and within feet of 6 schools and 22,056 residents."

Opponents like Kallos argue that the City should be focused on reducing the actual waste stream, and not on large capital projects.

The City is clearly trying to do both. The Department of Sanitation is continuing the Bloomberg administration's late-term efforts to expand what is recycled in the five boroughs. The City is introducing organics recycling to a growing number of neighborhoods.

But even the 91st Street transfer station's opponents concede that no matter how much the waste stream is reduced by recycling and other strategies, the city will still need to cope with solid waste - the question is where and how.

How Do You Measure Positive Impact?
How much of an impact will the new Marine Transfer Station have if local opposition is unsuccessful and it opens, as planned, in 2016?

Four of Manhattan's 12 Community Districts will send their waste to the new facility, which will sit on the site of a former transfer station that closed in 1999.

This would require around fifty daily truck trips into the Transfer Station, Mager said. But the City also estimates that, at maximum use, between 100 and 500 trucks could enter the facility every day, via an entrance ramp at 91st Street and York Avenue.

Commercial carters are also supposed to use the station eventually, contributing to what could become 24-hour truck traffic moving through the neighborhood.

The entrance ramp, which will run between the Asphalt Green sports complex and its soccer field, will bring trucks over the FDR to the marine transfer station.

Residential trash will be barged from the station to the New York Container Terminal on Staten Island, and then shipped by rail to two "waste to energy" incineration facilities in Chester, Pennsylvania and Niagara Falls, New York. The facilities are also operated by Covanta, which has a 20-year contract with the City.

Residents in both Chester and Niagara Falls are organizing to fight the shipment of New York City's trash into their cities.

Back on the Upper East Side, opponents to the 91st Street station maintain that it will not receive enough of Manhattan's trash to justify the daily physical impact it will have on one neighborhood.

Eddie Bautista, Executive Director of the New York City Environmental Justice Alliance, who was heavily involved in the City's creation and adoption of the Solid Waste Management Plan, responded that, "this transfer station was always supposed to handle the East Side wasteshed (i.e., the districts that always used this station for decades), as other marine transfer stations are only supposed to handle their respective local wastesheds."

According to the City, Manhattan's other eight community districts will continue to send their residential trash directly to the incineration facility in Newark, which opponents cite as a fundamental injustice. Why burden the Upper East Side with a transfer facility, when most neighborhoods will not have to live with one, they ask.

The Solid Waste Management Plan also proposes a marine transfer station at West 59th Street, which would handle commercial waste, along with a Gansevoort Street facility that would receive recyclables.

Belinda Mager said that both facilities were slated for completion. An additional marine transfer station for commercial waste, at West 135th Street, was dropped from the City's plan.