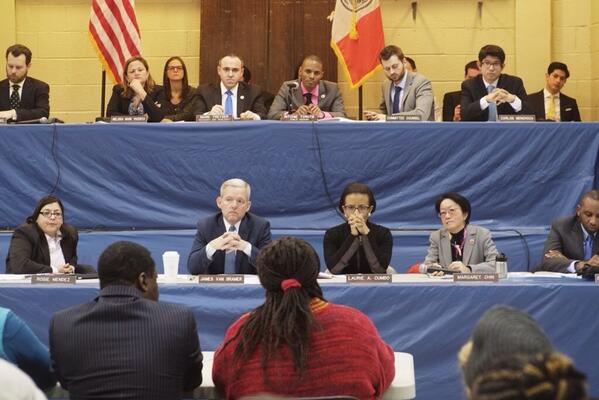 "I would argue there's no agency in the country where the gap between responsibility and resources is so large," asserted New York City Council Member Ritchie Torres, of the Bronx, about the New York City Housing Authority, or NYCHA. "There's no agency that has so much responsibility for so many people, hundreds of thousands of people, and yet receives so few resources to meet those responsibilities," said Torres, who chairs the Council's Committee on Public Housing.

In an interview with Gotham Gazette, Torres discussed his first seven months on the job and important public housing issues on the horizon. When the 26-year-old freshman council member discusses problems plaguing NYCHA, it is both personal and professional: Torres grew up living in public housing. Now, Torres leads the council committee with oversight over the NYCHA, which runs 179,000 apartments in 334 public housing developments across the five boroughs. New York City is home to the largest public housing stock in North America.

The months since Mayor Bill de Blasio and a new class of city council members took office ushered in a mounting sense of urgency around public housing not seen in recent years and yielded significant developments for NYCHA, with virtually unanimous positive reaction.

For example, NYCHA has been granted at least temporary relief from the $70 million annual payment it had been making to the NYPD for patrolling developments; a deal was reached in March that would provide NYCHA with $100 million dollars in federal funds to install permanent boilers in the 110 public housing developments where those systems were affected by Hurricane Sandy; and, in fiscal year 2015, NYCHA has over $200 million in public funds for infrastructure, a comprehensive security plan, and community centers; one of the largest monetary allotments in years, Torres touted.

In light of these milestones, Torres appeared emboldened as he discussed what issues he foresees the public housing committee focusing on in the coming months. Torres said that the committee will leverage its oversight power to examine and attract attention to issues such as increasing resident engagement and civic activism in public housing; development rights on NYCHA property; and examining the agency's most recent progress addressing repair backlogs.

Currently in its 80th year, NYCHA was once regarded as the country's most successful public housing authority, but is now in critical condition. While New York City's public housing stock remains intact and fully occupied (contrary to trends in other cities where public housing has been demolished or phased out), the agency and its 400,000 residents are dealing with the consequences of years of disinvestment by all levels of government.

"Our government, in the form of its housing authority is the city's largest and worst landlord," wrote NY1 political anchor Errol Louis in a recent Daily News column. According to a 30-page report published in July by Community Service Society (CSS), between 2001 and 2011 NYCHA lost roughly $1 billion in federal operating subsidies alone, resulting in the rapid deterioration of living conditions and a massive backlog of repairs estimated to cost between $7 and $15 billion. Residents live amidst untreated mold, cracked walls, leaks, heating breakdowns, broken elevators and rodents.

Yet, at the core of the crisis exists more than just the deterioration of brick and mortar, but the realities of political powerlessness that public housing residents face. NYCHA tenants vote in low numbers, admitted Torres. Hence, there is little to no incentive for elected officials, especially those without public housing or section 8 recipients in their districts, to mobilize around their plight; a status quo Torres is passionate about changing.

More concretely, Torres identified the proposal for participatory budgeting around Tenant Participation Activity (TPA) funds as one way of increasing civic engagement among residents. NYCHA tenant leaders are allotted TPA funds to execute programming in their developments. Torres would like to hold a hearing that explores ways to maximize the impact of this funding and draw more residents into the decision-making process for how it's spent.

Other topics Torres mentioned as worthy of a hearing in the near future include exploring best practices in property management that can be applied to NYCHA; revisiting the issue of security in developments; and a thorough overview of City Comptroller Scott Stringer's recent audit. Stringer's audit reveals NYCHA's failure to contract with companies that hire mandated percentages of low-income workers and NYCHA residents required by federal and city regulations.

The hearing that may be most impactful to NYCHA's long-term trajectory, however, could be the one the committee holds on financing options that can change the system's fiscal situation. Torres is enthusiastic about exploring the Rental Assistance Demonstration (RAD) program in the context of New York City. Through RAD, the public housing subsidy is converted into a section 8 contract, thereby allowing a housing authority to access both private and public funds, rather than only the latter as is now the case in New York City.

"Think about how we fund affordable housing," pushed Torres. "We're not funding it purely based on subsidies. We fund it based on the local housing tax codes, based on tax exempt bonds, based on a whole range of financial tools. So, if private housing providers can access these tools, why shouldn't NYCHA?" he asked rhetorically.

"And so, the Rental Assistance Demonstration program would allow NYCHA to fund public housing in the same way that we fund private affordable housing. NYCHA needs more funding for its capital needs....and RAD has the potential to deliver more funding, not at the margins, but to the point of changing the game."