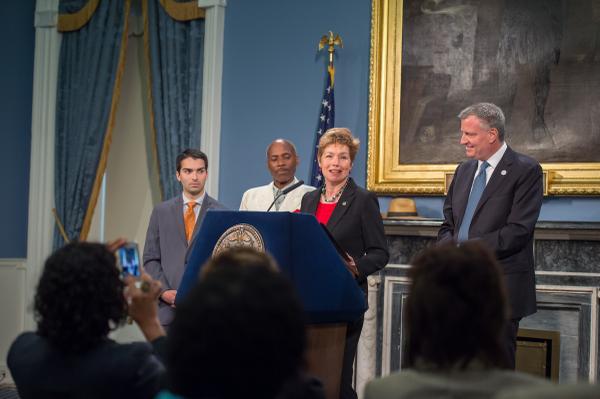 De Blasio, whose father was a World War II veteran, noted at the press conference to announce Sutton's appointment that veterans issues are deeply personal for him. He called Sutton, who has extensive experience on the federal level, a "transcendent figure."

"We have growing numbers of veterans returning from Iraq and Afghanistan, many with much more complicated challenges than past veterans faced," de Blasio said from City Hall's Blue Room on Monday. "There is a lot to do and a lot to expand on. It requires the right leadership. I think we know General Sutton has proven her strength."

Sutton will take her post on September 2 and begin a 90-day review of her office.

Like her predecessor, Terrance Holliday, who served as commissioner starting in 2010, Sutton will have to attend to the city's 200,000 veterans with a razor thin budget. In this current fiscal year, which began on July 1 and will end June 30, 2015, MOVA has a budget of $549,112 which pays for five staff members (including the commissioner) and only $25,000 in non-personnel costs. Advocates and City Council Member Eric Ulrich, who chairs the Council's Committee on Veterans, pressed the mayor for more funding during this year's budget negotiations, but it was not given.

With such a small budget, MOVA cannot directly provide services to veterans. In addition to serving in an advisory role to the mayor, MOVA leaders work with multiple federal, state, and local agencies as well as local organizations to ensure veterans have access to services. These services can include jobs, housing, medical benefits, and education.

With such limited money and manpower and so many people to reach, MOVA faces a tall order. A growing number of those in the veteran community feel it's time to revamp the office.

"MOVA has not been effective. Most veterans, especially in our generation, have no idea what MOVA is and don't see MOVA playing a critical part in their life," said Paul Rieckhoff, Founder and Chief Executive Officer of Iraq and Afghanistan Veterans of America (IAVA). "MOVA must be revamped. She [Sutton] has to lead that change."

Rieckhoff added that Sutton is a "national-level leader" and called the appointment a "huge homerun."

With the support of advocates, Ulrich has proposed legislation that would establish a Department of Veteran Affairs, removing it from within the mayor's office. Establishing a separate agency would allow for more funding and personnel resources, as well as alleviate some issues with funding relevant non-profits. At least for now, the mayor appears to be taking a wait-and-see approach before shaking things up.

There will be a hearing on the legislation this fall, but after having already waited eight months for the mayor to name a new commissioner, some advocates are looking for more than just a new leader at the helm.

"[MOVA] needs money, power, a staff, and real programs," Rieckhoff said. "[Sutton] needs to be empowered to have money, staff, and authority. If she doesn't have that it will be strictly ceremonial."

"They can only do what they can do with what resources and money that is currently there," said Joseph Bello, a Navy veteran and founder of NY MetroVets, an advocacy organization. "I would like to see the mayor put his money where his mouth is and get more funding into that office to give her the ability to actually do some of the work."

Sutton did not comment directly on the proposal, but multiple references of partnership during her speech indicated she understood, at least in part, the limitations of the office in its current form.

"Community partnerships within New York City organizations are critical to meeting the needs and harnessing the strengths of our city's veterans," Sutton said. "I will join with my fellow commissioners and key members of this administration to identify potential synergies as virtually every policy issue facing New York City is relevant for veterans and their loved ones."

Ulrich said he had not spoken to Sutton about his proposal yet, but hoped to in the near future.

"I think she will take this office to the next level," Ulrich said following Monday's announcement. "I think she is uniquely qualified for this position and she brings a higher level of expertise and management that I think will serve her and the veterans of the city well."