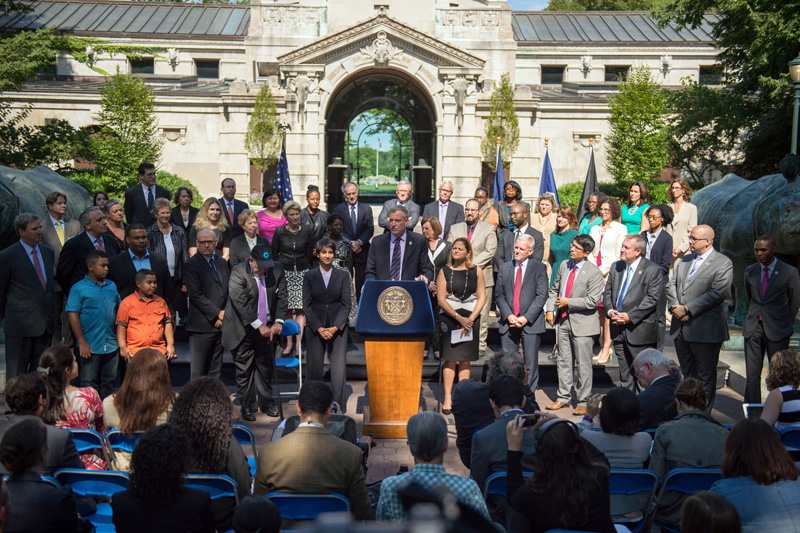 Less than three months before the City rolls out its new municipal ID card program, New Yorkers are being called on for the first time to publicly express their interests and concerns regarding what many consider one of the de Blasio administration's most important initiatives.

The New York City Identification Card Program, more commonly referred to as the Municipal ID, was codified into law in July and has received widespread acclaim. In a city of immigrants, many undocumented, the ID is poised to provide a form of identification which would give the most vulnerable residents of the city key protections and access to vital services. Regardless of immigration status, homelessness, gender identity or virtually any other factor, all New Yorkers 14 years and older will be eligible for the card.

On Wednesday evening, the city's Human Resources Administration (HRA), the agency responsible for implementing the program, will hold a public hearing to discuss the rules which have been established for application procedures and to address privacy and security concerns. These concerns remain at the forefront for those hesitant to back the program.

HRA has also already given people the opportunity to air their opinions and provide feedback via its online portal, where commenters have reinforced concerns that have existed throughout discussion of the initiative.

Ever since the program was announced, immigrant rights advocates have taken it with a pinch of salt. While they applaud the overall objectives of the program, some express skepticism about the information being collected and what will happen with it, and the danger of creating stigma for undocumented residents of the city.

These concerns are echoed through the comments expressed on the HRA website. In fact, the latter issue was raised by Council Member Dan Garodnick when the bill was being voted on in June. "If this card does not gain widespread voluntary acceptance, I fear that it will serve the opposite purpose than what is intended, namely that it will, in fact, simply identify the undocumented for the government," he said at the Stated Meeting of the Council on June 26.

A social worker, Rhonda Ryan, wrote on HRA's website, "Everyone deserves to be able to carry a document that says who they are. My concern however, is getting illegal persons to trust the process and to sign up for the card. They are very worried about getting caught in the country illegally, therefore I think there will need to be major training and sensitivity around this issue in order to get the most vulnerable population the card they deserve."

To address these concerns, the de Blasio administration announced that it would partner with 33 cultural institutions, such as the Bronx Zoo and the Metropolitan Museum of Art, to provide free access and memberships through the ID cards, which will be provided free of charge to applicants. This was done in the hopes of attracting a wider population to the cards and removing the possible stigma. It seems widely agreed upon that attaching those perks will be a boon to the program.

The greatest issues, most agree, are those of privacy.

Council Member Daniel Dromm, who championed the legislation, believes the protections included are strong enough to keep immigrants from the prying eyes of government agents. "The NYPD will not have access unless they have a judicial subpoena," Dromm said by phone this week. "Some people wanted an administrative subpoena, but we didn't allow that," he added.

Dromm stressed the importance of all New Yorkers signing up for the card. "When we have a lot of people thrown into the mix, there is virtually no chance of telling who is undocumented and who is not. And we will not be asking people if they're documented or not."

To add to the benefits of the card, Dromm said the Council has reached out to businesses and financial institutions, such as Mastercard, to accept the card as a form of identification, and that these companies have shown a lot of interest. This would be a breakthrough in providing homeless New Yorkers and undocumented immigrants with much-needed access to bank accounts and financial services.

"There are concerns that all advocates share," said Emily Tucker, staff attorney for immigrant rights at The Center for Popular Democracy. "We live in a society with increasing surveillance and there are worries that federal authorities might get their hands on the data. We just hope we can let people know so they can make an informed decision about the ID cards."

In particular, the Immigration and Customs Enforcement's (ICE) Secure Communities program, which targets undocumented immigrants with criminal records, relies heavily on coordination with local authorities. "It's hard to say how it'll work out with ICE. There's not a lot of transparency in how they operate," said Tucker. "City officials have assured advocates that the information will be protected. But the systems are very opaque." However, she was encouraged by the potential in the system and said immigrants could rely on it without fear.

Also, there are ongoing efforts to distance the NYPD from ICE officials. Just yesterday, City Council Speaker Melissa Mark-Viverito introduced a bill to end the policy of the City handing over detainees to ICE.

Gotham Gazette reached out to ICE officials for comment. Public Affairs Officer Luis Martinez said, "U.S. Immigration and Customs Enforcement (ICE) requests detainers on individuals arrested on criminal charges to ensure that dangerous criminals are not released from prisons or jails and into our communities. ICE will continue to work cooperatively with law enforcement partners throughout New York as the agency seeks to enforce its priorities through the identification and removal of convicted criminals and other public safety threats."

Among the stipulations in the municipal card legislation is that the information collected by HRA will be stored for up to two years, following which it would be destroyed. Future records would also be discarded after the application process if it is deemed unnecessary to store them.

This record keeping, and the NYPD's access to the data, was the crux of the argument made by the New York Civil Liberties Union (NYCLU). "Our primary concern is that the legislation allows the City to retain the collected information for two years. The State specifically lowers the standards by which law enforcement agencies can obtain that information. They can do so without having to show probable cause" said Johanna Miller, advocacy director, NYCLU.

Miller said immigrants will be excited about the program, but most would have no knowledge of how their information is being used. "One important measure we hope the City will take is to agree to give people notice when law enforcement requests their information. Otherwise people won't have the opportunity at all to defend their privacy," she added.

"The city has made huge strides in making the city accessible to immigrants. But in this case, they really compromised too much when the NYPD indicated they would want access to the information. They set out to create a program beneficial to immigrants and to the most vulnerable communities. But really, they're creating a program that would benefit the NYPD," Miller said.

Harpreet Toor, from the Sikh Cultural Society, posted on HRA's site, "In the rules there is a lack of a penalty for anyone who intentionally or negligently releases confidential HRA collected municipal ID data. This [penalty] needs to be included to explicitly to give confidence to municipal ID applicants and to deter anyone who would use this data for their own purposes."

There was Republican opposition to the bill in the City Council. Believing that it encourages illegal immigration, Council Member Vincent Ignizio, one of the three Republicans on the Council (the only council members to vote against the proposal) said at the June 26 meeting, "I will vote no on this bill because I believe there are legitimate security concerns that have not been adequately addressed in it, and notwithstanding the desire of my colleagues to act in a compassionate manner to ensure that people aren't treated...unfairly."

The other side of the coin is that the ID is one of the current administration's most progressive moves so far. "NYC's expansion of the municipal ID to a broad swathe of residents is an important advancement not only for the immigrant population but for all New Yorkers," said Peter Markowitz, a professor at Cardozo Law School.

Markowitz insisted that the ID would provide better access to critical government services and improve interactions with the NYPD. "The City Council and the mayor have gone to great lengths to ensure that immigrants can share the information they need to and that the information stays with the city. Immigrants would be wise to take this opportunity," he added.

Immigrant communities are raptly awaiting the ID cards, according to the New York Immigration Coalition (NYIC), an umbrella organization that has more than 200 member organizations. "Immigrants are definitely excited about it," said Betsy Plum, director, special projects, NYIC. She expressed confidence in the privacy protections put forth in the legislation and said the benefits outweigh the minimal risks. "An ID is an incredible privilege and a lot of immigrants are prohibited from it," she said. "It's the element that gives you access to the rest of your life. It's the key to the city."

At Wednesday's hearing representatives from the NYIC and NYCLU will be present to testify. The Mayor's Office of Immigrant Affairs did not provide comment for this story.