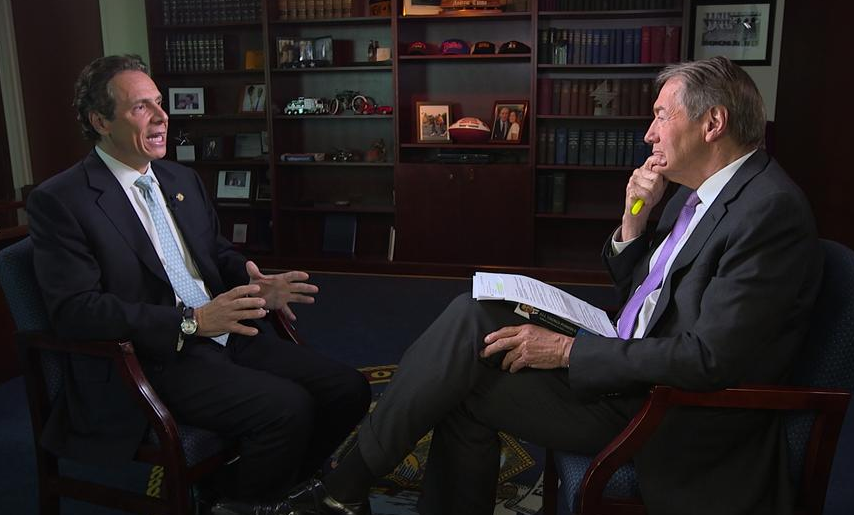 New York Governor Andrew Cuomo's policy book for his 2009 campaign seeking the state's highest office promised that "sunlight is the best disinfectant and will bring transparency and ethics to government." Cuomo pledged to post his full schedule online including meetings with lobbyists and elected officials. Instead, the press has become accustomed to daily announcements that "Governor Cuomo is in New York City."

When it comes to transparency, Cuomo's first term has included a great deal of state data published online, but can largely be characterized by secrecy, obsessive message control, and the editing of public records and reports.

"The bottom line is Andrew Cuomo is not a transparent governor," said Baruch professor of political science Douglas Muzzio. "There are many points, but the fact that the administration uses text messages rather than email is troubling. The administration closely holds their cards to their chests."

However, Muzzio says that the lack of openness may very well have enhanced Cuomo's ability to govern. "Lack of transparency is not necessarily a bad thing. Too much transparency leads to inefficiency. Would he have been successful in budget negotiations, the SAFE Act negotiations, same-sex marriage negotiations? Some things in politics ought not be exposed to public view because it can freeze system," said Muzzio.

The Cuomo administration has pushed transparency efforts through the use of technology and posting data online, but experts agree most of the information shared that way has been superficial.

In the days prior to the 2011 launch of Cuomo's CitizenConnects website ("an electronic town hall") the governor's press office lobbied reporters not to focus on the fact that Cuomo would be posting his full public schedules online and instead that the site was designed to keep New Yorkers apprised of public meetings and to share their ideas. The administration did begin posting Cuomo's schedules, but with months delay and serious omissions.

A Mixed Bag
"I can charitably say the administration has been a mixed bag of making data open to the public," said Blair Horner of the New York Public Interest Research Group (NYPIRG). "They have utilized technology to make government databases open to the public and they deserve credit for it. But when it comes to the process by which decisions are made the administration is opaque - budget negotiations are shrouded in secrecy, they monitor who is requesting information through FOIL (Freedom of Information Law). They really cherry pick the information they make available to the public."

Horner, who is a seasoned Albany veteran, says that Cuomo's father Mario had the most open administration he has seen whereas former Gov. George Pataki was very closed off. "I think this Cuomo (Andrew) is closer to the Pataki administration. They are extremely secretive. We still don't know how they are funding the building of the Tappan Zee Bridge and they are pouring concrete into the ground."

Horner notes that increasing transparency whether it be from sharing schedules, government data, or policy positions can open a politician up for attack. Cuomo has felt that sting a number of times in his first term.

Cuomo's schedule became particularly important when he unexpectedly announced in his 2012 state of the state speech a plan whereby Genting, a Malaysian gambling company, would build and run a Queens convention center and casino.

Many observers wondered where the idea had come from. It turns out that Cuomo was approached about the idea by Genting officials during an October 2011 fundraiser that was not disclosed on Cuomo's official schedule. Cuomo officials said the omission was a mistake. It further turned out that Genting had given $400,000 to a business-focused advocacy group, formed at Cuomo's behest and called The Committee to Save New York, while Cuomo was working on the convention center plans. The New York Gaming Association gave the committee $2 million and The Committee to Save New York refused for months to release its list of contributors.

As criticism swirled, plans for the convention center were eventually dropped.

Meanwhile, the administration has won praise from advocates and tech groups for making budget data and info on state agencies available through open.ny.

Media Relations
Cuomo's new memoir details what appears to have bred his deep mistrust of the press. In the book, released October 14 (exactly three weeks before Election Day), Cuomo explains how he learned about his divorce from a New York Times reporter and how he feels the press was responsible for sinking his 2002 bid for governor because it harped on his statement that then-Gov. George Pataki had held former New York City Mayor Rudolph Giuliani's coat in the aftermath of the September 11, 2001 terrorist attacks.

Perhaps an exchange with the Times' Amy Chozick best distills Cuomo's feelings for the press: "You have to be careful because sometimes the temptation is actually to tell [reporters] the truth," Cuomo said in reference to those 2002 comments. Chozick responded: "We like the truth." To which Cuomo countered: "No. You like your truth."

Albany insiders remember Cuomo's father Gov. Mario Cuomo as someone who regularly conversed with the press and had collegial relationships with a number of reporters. The son's administration has earned a reputation for the exact opposite.

Administration members have developed dossiers on reporters and in the case of Liz Benjamin of Capital Tonight, the brief was prepared for a meeting with her employers at Time Warner Cable. Her file was marked "Generally Snarky." Administration officials have made direct appeals to have reporters' work or style changed. Cuomo is known to himself make off-the-record calls to reporters and editors trying to shape stories.

The governor has continually refused to appear on prominent political television shows such as Benjamin's and Errol Louis' Inside City Hall. Instead, the governor makes radio appearances on a fairly regular basis, but in a very selective manner.

Cuomo has so tightly controlled his interaction with the media that over his first four years in office he has mainly dealt with two reporters to get his message out to the public. Early in his term Cuomo exclusively appeared on a radio show hosted by Fred Dicker of The New York Post. The administration appeared to float policy ideas through Dicker's articles with anonymous tips. If something was brewing in the news cycle that needed addressing Cuomo would call in to Dicker's show and carefully discuss it, though the focus of his appearances was normally on Cuomo's love of muscle cars and Upstate.

Eventually the pair had a falling out when Cuomo began advocating for tougher gun laws, leading to the SAFE Act. Since then Cuomo has made regular, albeit often brief appearances on Susan Arbetter's The Capitol Pressroom radio program on Syracuse's WCNY.

"He doesn't talk to the press except for in tightly controlled situations and that is a problem because you guys get the message to the people," said Muzzio. "Right now the [agency] commissioners don't talk to anyone unless they get approval from the second floor [of the Capitol, where Cuomo's office is]."

"There is a general lack of information getting to the public. He's got a responsibility to the people and ignoring the press is bad because there could be a much greater discussion of policy than there is," said Muzzio.

With the release of his memoir, Cuomo did tape an hour-long interview with PBS' Charlie Rose in mid-October. However, he continues to ignore invitations from NY1, incuding for televised debates.

In-house Communications & Record/Commission Tampering
In what appears to be another attempt to restrict media and general public knowledge of the administration's goings on, members are known to follow tight rules on internal communications. Cuomo's staff confers by Blackberry pin messages that are not saved for the archives as messages sent by official email would have to be under state law. And Pro Publica reported in August that the administration has an email policy that requires state employees to automatically delete their email periodically.

Pro Publica also detailed how administration members have conducted state business by private email. "Government business should never be conducted through private email accounts," Christopher Dunn of The New York Civil Liberties Union, told Pro Publica. "Not only does it make it difficult to retrieve what is a government record, but it just invites the suspicion that a government employee is attempting to evade accountability by supervisors and the public."

The administration has also tampered with records from the governor's time as Attorney General. The Times Union reported in July 2012 that administration staff reviewed documents it had requested from the archives, inspected them after they left, and then removed what they didn't want them to see.

The New York Times reported that administration staff were "editing" Cuomo's public record as attorney general by pulling multiple files from the state archives. The files related to Cuomo's controversial investigation into the "troopergate" scandal involving then Gov. Eliot Spitzer and former Republican Senate Majority Leader Joe Bruno. Cuomo's report found major fault with Spitzer's behavior but exonerated Bruno. Other reports were less damning of Spitzer and some saw Cuomo's as a political move to damage Spitzer. Administration officials told The Times that they were simply removing documents that should not have been placed in the archives in the first place.

Lastly, but perhaps most important, is Cuomo's handling of commissions. Cuomo has come under the spotlight for his and his administration's alleged meddling in the anti-corruption Moreland Commission - which the governor had formed to root out corruption in Albany and closed down in what many call premature fashion. This group includes U.S. Attorney for the Southern District of New York Preet Bharara, who has had his office pick up on Moreland's initial work and is also investigating Cuomo's interference.

A number of members of previous commissions including Cuomo's on the Long Island Power Authority and tax relief insist Cuomo had complete control of their work - editing their findings, pressuring them to back his agenda, and at times simply telling them what their findings should be.

It was also recently reported by Capital New York that Cuomo's administration edited and delayed a federal fracking study - being performed at the governor's request while he simultaneously drags his feet on taking a stance on the controversial energy extraction practice. Cuomo has said he will make no declaration about fracking before Election Day.

What is most striking about his handling of the recent Moreland Commission on Public Corruption is that Cuomo appears to have begun interfering when the commission began looking into groups that had strong connections to his administration. Subpoenas to the Real Estate Board of New York (REBNY), which donates heavily to Cuomo, and to an ad-buying firm Cuomo uses were pulled back at the suggestion of Cuomo staffers. Cuomo had promised in August 2013: "Anything (the Moreland Commission) wants to look at, they can look at—me, the lieutenant governor, the attorney general, the comptroller, any senator, any assemblyman. They have total control and ability to look at whatever they want to look at."

Muzzio says that its important for politicians to "separate what is good for governing from what is good electorally. It is good at times to open yourself up, but he can't. He is a macro- and micro-manager."

A cloud of 'secrecy' even hovers over the governor's re-election campaign. Horner of NYPIRG said that he would love to know more about Cuomo's policy positions and that it would help Cuomo build a mandate. However, he admits, "When you take a policy position you leave yourself open to opposition. Cuomo appears to be taking the Rose Garden Strategy. So no, Albany has not yet achieved openness nirvana. There are still some very dark places."

***
This article is part of The Cuomo Record, Gotham Gazette's series looking at the governor's first term. Find the other articles in the series here.
***
by David King, Albany Editor, Gotham Gazette
@DavidHowardKing