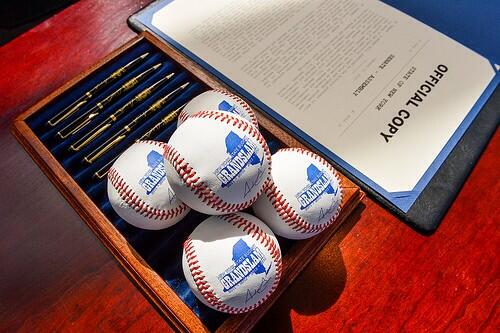 Governor Andrew Cuomo and his administration were so excited about delivering a four straight on-time budget that they printed commemorative "Grand Slam" baseballs to hand out to legislators to memorialize the accomplishment.

In fact, Cuomo's roundly lauded record of timely budgets has become the simplest argument the governor and his supporters have made for giving him a second term. Clear, responsible leadership, they say: four on-time spending plans, keeping state agencies functioning, workers paid, and infrastructure maintained.

It might not seem like much to those unfamiliar with New York politics, but for years the state was known for knock-down, drag-out budget fights between the Governor and Legislature that left the state without a spending plan far past the April 1 deadline.

What's more, in a state that has seen recent budgets that grow spending by about 8 percent most years, Cuomo delivered each budget with relatively flat spending: 2 percent increases to match inflation. That is no easy feat considering it is basically the Legislature's job to demand more spending. Not to mention, Cuomo took office right as the federal stimulus money that had been used to prop up State spending was drying up - Cuomo had to make hard cuts without millions in federal cash.

And yet Cuomo faces criticism from both those who want to see the State cut spending and those who want it to spend more on things like education, healthcare, and transportation.

"The first year the governor came in with $6 billion in federal stimulus that just disappeared overnight," said E.J. McMahon of The Empire Center, a non-partisan think tank. "Federal cash propped up school aid, Medicaid, and it was coming to an end. It was foreseeable, but that doesn't lessen the fact that the governor had to cut spending...he simply could not afford to replace the federal stimulus."

Facing major cuts in Medicaid spending Cuomo called in the hospitals and healthcare unions to figure out how to spend the money that was available. "That kept them busy so that they weren't out there attacking him," said McMahon.

Kathy Wylde of The Partnership for New York City, a pro-business group, called Cuomo's first-year efforts "courageous" because he was willing to risk political capital to make drastic, needed cuts.

McMahon said that while he was impressed with Cuomo's first budget, the following three years saw the governor getting creative in ways to hold spending to a two percent increase without actually balancing the budget: "You look at the first year and the governor really had success in holding spending on Medicaid, school aid, and [making] other cuts, but in his second budget he lets out his belt."

McMahon says that Cuomo has used "gimmicks" to patch holes in the budget. The State has deferred $1 billion in pension payments, tapped into the State Insurance Fund for $1.75 billion, and also reclassified debt to make things look better for current budgets. "Even with keeping spending flat, not making cuts, the governor needed taxes and spending gimmicks that aren't recurring. So the budget isn't balanced," McMahon asserts.

Comptroller Tom DiNapoli has expressed concern over the State's raid of the State Insurance Fund and other practices. In his 2013 budget report, DiNaopli praised the governor and the legislature for enacting another on-time budget, but criticized a lack of transparency around a few big-ticket items and warned of a budget containing "temporary resources and revenue assumptions that may fall short." He indicated that the State should reduce its "reliance on backdoor borrowing."

Specifically, DiNapoli's report noted, "The enacted budget relies on more than $4 billion in temporary and non-recurring resources, excluding $5.1 billion in extraordinary federal assistance for Superstorm Sandy expenses. At least $467 million in new temporary resources to be used in 2013-14 – including a $250 million transfer from the State Insurance Fund (SIF) – are included in the budget. In total, the enacted budget authorizes the transfer of at least $1.75 billion from assessment reserves held by the SIF to the General Fund through SFY 2016-17."

At the start of this year Cuomo began talking about the state having a $2 billion budget surplus - something that baffled McMahon and other budget experts. McMahon has described it as an "aspirational" surplus and yet in August Cuomo announced a $4.2 billion surplus thanks to legal settlements reached with big banks. The State took in $3.2 billion in a settlement with French bank BNP Paribas. Earlier in the year Cuomo and the Legislature came to a budget deal to strip control of a $613 million bank settlement away from Attorney General Eric Schneiderman.

And While McMahon is concerned by lack of cuts to members of the public employees unions, education advocates and transportation experts are concerned that the governor isn't spending nearly enough.

Susan Kent, president of The Public Employees Federation (PEF), continues to insist that Cuomo's cuts to the public workforce have damaged the ability of state agencies to fulfill their basic tasks. "Many state agencies are understaffed, services are being cut in communities, and expensive privatization is on the upswing," said Kent in a statement reacting to Cuomo's proposed 2014 budget. "We believe the public-sector workers we represent, the governor's own workforce, should have the same expectation of job growth and stability as those workers in the private sector."

Education
Education advocates, while happy to see Cuomo commit to a state-wide pre-kindergarten plan, say that governor has not addressed the gap in quality between poor schools and rich schools. In 2006, well before Cuomo's tenure, the State Court of Appeals found for the Campaign for Fiscal Equity in its lawsuit against the State that accused New York of failing to live up to its constitutional and financial obligations to fund education. The court mandated increases in funding for K-12 with a floor of at least $1.9 billion annually. Gov. Eliot Spitzer took office in 2007 and with the Legislature, implemented a plan that increased education spending for New York City by $3.2 billion and the rest of the state by $4 billion. However, in 2009 following the economic collapse, Gov. David Paterson implemented a spending freeze. Then the state cut $2.7 billion in education aid in 2010-2011.

McMahon argues that Spitzer gave up the most important thing he had control over in budget negotiations, education spending, and set a bad example for a legislature that is always demanding more education money. "When Cuomo came in and cut education spending, everyone lost their mind," said McMahon.

But education advocates insist that Cuomo is hell bent on privatizing education and isn't interested in increasing education funding to make up for the inequalities the court found in 2006.

"After four years, the governor has totally failed to address the massive inequality in education between rich and poor schools," said Billy Easton, of the Campaign for Fiscal Equity, in 2014 reacting to Cuomo's budget proposal. "If this budget is enacted it will mean students will see cuts on top of cuts."

While Easton is concerned with cuts, McMahon is concerned that Cuomo decided to step in to Mayor Bill de Blasio's push for universal pre-k and have the State fund it because it is another "entitlement" the State has to afford.

Transportation
Transportation experts insist that Cuomo has avoided dealing with the Metropolitan Transportation Agency's inherent cash problem. While the agency has good ridership and decent income, it still faces labor and healthcare expenses it can't keep up with and has a capital plan that isn't totally funded.

In September, the MTA issued a $32 billion capital plan with a $15.2 billion gap. The budget now goes to the State where a skeptical governor is waiting. Cuomo has insisted when questioned that the initial budget request by any agency is always inflated. "The first budget from every agency always calls for $15 billion extra," Cuomo responded to a reporter in October. "That's part of the dance that we go through. That's why I say it's the initial, proposed budget. The DOT budget is going to ask for $15 billion. The second floor budget is going to ask for $15 billion. That's just how it works. We'll then look at that budget and go through it, and we'll come up with a realistic number. But we have a very real $4 billion surplus, and we have a two percent spending cap that I still follow. So that's the discipline that's in the process."

Cuomo insisted that there is no need for new tolls or a new revenue source for the MTA despite MTA Chair Tom Pendergrast's suggestion otherwise.

Experts, including McMahon, expect that without new funding sources the MTA will issue more debt and hike fares this year. "The MTA is facing a yawning hole and something has to happen," said McMahon. The governor can't keep pretending he doesn't have anything to do with them."

Future Budgets
Cuomo will face a major revenue quandary should he win a second term, which is expected. The state's millionaire's tax is set to expire in 2017. McMahon points out that the state's top two income tax tiers are temporary and will expire. When Cuomo ran in 2010 he insisted that continuing the millionaire's tax would count as "a new tax" but he quietly extended it in a deal with the Legislature. The fruits of the extension were seen this fall as rebate checks went out to middle income families with children just in time for the election.

Members of The Business Council of New York State, which endorsed Cuomo again this year, discussed just how likely it would be for the state to let the tax sunset during their September meeting in Bolton Landing. The consensus? Not likely at all.

"The temporary millionaires' tax raises a lot of money...It's hard for me to see the political situation accommodating a $3 billion tax cut which is just going to go to the top half-percent of the population," James Wetzler, a retired tax consultant who served in the administration of Mario Cuomo, was quoted as saying by Capital New York. "The question is, how are you going to pay for this tax cut, assuming you want to do it. There's no attractive way to do it."

Cuomo continues to campaign on his fiscal successes - in his lone debate with Republican opponent Rob Astorino on-time budgets were one of the first things he mentioned. But some experts worry Cuomo is sending mixed messages. Cuomo has suggested to more liberal audiences that now with the state's fiscal house in order he can afford to spend on more progressive initiatives like The DREAM Act. McMahon said Cuomo's second term will be far more testing because he is being pulled in multiple directions politically. "It is absolutely true that in his first year he made a series of tough choices but it gets increasingly more difficult in the second term, given his political choices."

***This article is part of The Cuomo Record, Gotham Gazette's series looking at the governor's first term. Find the other articles in the series here.