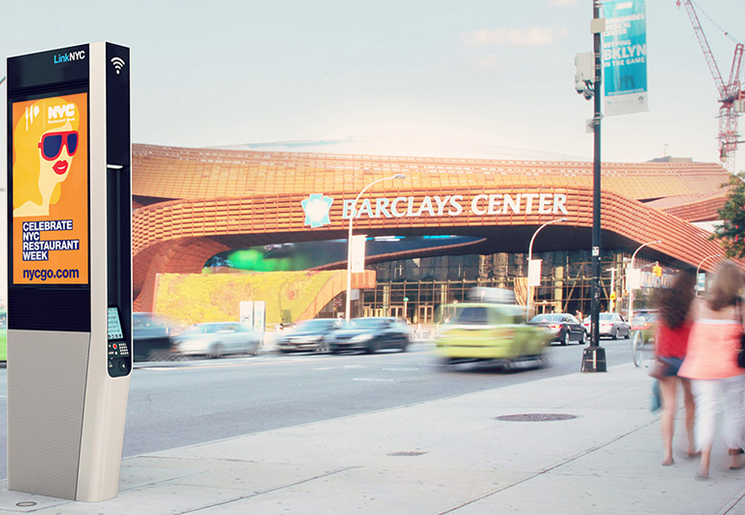 image: NYC Department of Information Technology and Telecommunications via link.nyc

NEW YORK—Blazing fast wireless internet speeds. Updated digital advertising. Free phone calls to anywhere in the United States. Cell phone charging stations. What has been impossible for the old payphones that currently dot the streets of New York City will, over the next few years, become a reality.

On Monday the City announced CityBridge, LLC as the winner of the franchise agreement which will bring the city's payphones from the 20th century boldly into the 21st. The agreement, which will extend through June 24, 2026, will create LinkNYC, a first of its kind communication network aimed at bringing Wi-Fi hotspots to all corners of the city.

"It is a once-in-a-lifetime opportunity to reimagine the payphone and develop a revolutionary new technology for the citizens of New York and its visitors," Scott Goldsmith, chief commercial officer for Titan and a managing member of CityBridge said at a press briefing. "It's a chance to make the lives of each and every New Yorker better."

CityBridge is a consortium of companies including Titan, Control Group, Qualcomm Incorporated, and Comark; with extended team members Transit Wireless and Antenna Design. Each company brings expertise in advertising, technology, or hardware design to ensure the units will be able to withstand the rigors of New York City, and the ever-changing landscape of technology.

While they will still be able to make phone calls, the new units — called Links — will not resemble the current payphones. Slender and modern in design, they will use a touchscreen tablet interface and keypad for making calls.

Gone are the phone receivers of today's payphones, which often end up broken or vandalized. Users can simply plug in their headphones to the links to make calls and those without can use the microphones and speakers installed on the units. Calls to anywhere in the 50 states will be free.

Links will also allow users to gain access to information on city services and see maps. If there is an emergency, the City will be able to push area-specific notifications to the displays. These could be anything from evacuation orders like in the case of those issued during Superstorm Sandy or notice of where the nearest shelter is in the case of a bad storm.

The links will offer up to gigabit of Wi-Fi service, putting to shame the current offerings of internet service providers most New Yorkers have in their homes. At gigabit speed a user could download a two hour HD movie in roughly 30 seconds, a task that can take hours on traditional home Wi-Fi speeds. The Wi-Fi will extend up to 150 feet from the units. The City has a good deal of information available at its new link.nyc website.

The new technology could be a boon to a city that continues to stay on the leading edge of the technology industry. But much like the old payphones, if they are not monitored, they could end up being outdated long before the franchise agreement runs out.

City Council Member Mark Weprin, along with 28 other council members, wrote a relevant letter to Mayor Bill de Blasio in the spring. The letter expressed concern for the payphone Wi-Fi selection process and took exception to the fact that only one winner would be selected. The council members argued the lack of competition might lead to the new technology going out of date, especially in poorer neighborhoods.

Following Monday's announcement, Weprin said he thought the new design was great and that he is open-minded about what it will bring to the City.

"I am hopeful, given the scrutiny we put them under, they are making sure that they operate in a way that won't make [the units] obsolete in a very short period of time," Weprin said by phone Monday. "Hopefully they will continue to become state of the art as we go through it."

Where these links will be placed has yet to be determined, but the agreement does require equitable distribution of the up to 10,000 units in all five boroughs. This was a crucial sticking point for Mayor Bill de Blasio, who has made it one of the tenets of his administration to get broadband access to all New Yorkers.

"To be able to walk by a kiosk and access a signal on your cell phone, given the disproportionate reliance on wireless and on mobile [for people of color]...this is a going to be a critical step towards more access and we are very proud," Maya Wiley, counsel to the mayor, said at the press briefing.

Getting access to all, particularly those in the city's poorer communities may take a while. Construction will begin in late 2015 and the contract stipulates 500 links must be installed one year and four months after the Franchise and Concession Review Committee (FCRC) approves the contract. A public hearing of the FCRC is set for December 8, with a vote scheduled for December 10.

The contract gives CityBridge four years to build the first 4,000 links which will replace the existing payphones, mostly advertising structures at this point. They must be distributed equally among the boroughs, something that is not done currently.

Advertising dollars will power not only the build-out of this project, but will also create a long-term revenue stream for the City. Under the current payphone structure, the majority of the units are in Manhattan where ads generate the most money.

But in order to ensure equity among all five boroughs and live up to the promise of bringing wireless access to all New York neighborhoods, these units will need to branch into areas currently not highly sought after by advertisers.

Wiley said she did not think it would be a problem.

"There is an assumption that poor people don't spend money. They actually spend a lot of money and arguably they spend more money on some of the goods and services we buy," Wiley said. "One of the tricks is to figure out the advertising that actually are providing the things that folks in all communities are buying and pay for."

LinkNYC is projected to generate more than $500 million in revenue for the City over the next 12 years. Wiley said like the current payphone ad revenue, some of that money will go to pay for internet upgrades in NYCHA, the city's public housing.

The City Council will assume a role in ensuring the links are equitably distributed around the city. Council Member James Vacca, chair of the Council's technology committee, will lead that charge for the next three years, the rest of his final council term. In the spring, Vacca also wrote a letter to Mayor de Blasio expressing his concern about having only one company win the franchise.

While the winning bidder was a consortium of companies, it is technically only one entity that won. Vacca said he does feel having one company with a citywide contract will incentivize a more equal distribution, but it will need to be monitored.

"The monopoly issue still bothers me," Vacca said by phone Monday. "My concern, and it continues to be a concern — and I will be using my oversight power to make sure it is monitored — is that these new kiosks would be concentrated in those areas of greater wealth or more pedestrian traffic."

Monopoly or not, everyone can agree, the new links beat the old payphones.